Bhardrachalam is a small temple town in the Bhadradi district of Telangana. The town is famous for Sri Sita Ramachandra Swamy temple which is one of the most important Hindu temples dedicated to Sri Rama. The temple is situated on the banks of River Godavari in the Dandakaranya region and is visited by thousands of devotees from across the country.

The temple has rich historical background. It was constructed in the 17th century by the then Tahsildar of the place named Kancharla Goppana. Later he became popular as Bhakta Ramadas as he was an ardent devotee of Lord Rama. 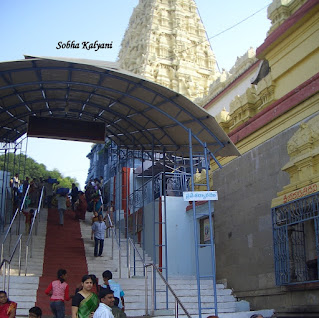 The temple is located on a small hillock named Bhadragiri and the town of Bhadrachalam derived its name from Bhadragiri hillock. According to legend a great saint named Bhadra who was an ardent devotee of Sri Rama was blessed by Sri Rama and transformed himself into a hillock and placed the temple of Sri Sita Rama on his head. The temple has rich historical background and it is believed that the temple dates back to the era of Sri Rama.

According to legends, Bhadra Maharishi was an ardent devotee of Lord Vishnu. He performed severe penance on the banks of River Godavari for attaining Moksha by the grace of Lord Vishnu. Bhadra happens to meet Lord Rama (one of the incarnations of Lord Vishnu) and requests Him to be seated on his head. Rama who was in search of His abducted wife Sita Devi, promises to fulfill his wish on His return. To keep His promise, Sri Maha Vishnu appears as Vaikuntha Raama and fulfills Bhadra Mahamuni's wish. Thus the place got its name after Saint Bhadra and is known as Bhadrachalam.

As per historical evidence, an old tribal woman named Pokala Dhammakka of the 17th century was a staunch devotee for Sri Rama. She used to live in Bhadrireddypalem, a village near Bhadrachalam. One night Sri Rama appeared in her dream and asked her to unearth the idols that were embedded in the Bhadragiri hillock.

The next day morning she went in search of the hidden idols and found the idols deep inside an anthill. She kept fetching pots of water from the nearby Godavari river and pouring on the anthill till the anthill got washed away. She then found the idols of Sita sameta Vaikuntha Rama and Lakshmana. The old tribal lady took the idols, placed these on an earthen platform under a thatched roof and worshiped the idol regularly. One day Sri Rama reappeared in her dream and foretold her that one of his devotees named Gopanna would construct a temple for Him on Bhadragiri hill.

The construction of the temple on Bhadragiri hillock was the dream project of Kancharla Gopanna - a 17th century CE (Current Era) devotee of Sri Rama. He became popular as Bhakta Ramadasu. As per historical evidences, in the 2nd half of 17th century, Kancharla Gopanna - the then Tahsildar (Revenue Officer) of Bhadrachalam is said to have used the govt revenue to construct the temple. He was thus imprisoned in a dungeon in Golkonda Fort by Abdul Hasan Tana Shah. It is believed that Lord Rama accompanied with His younger brother Lakshmana came in disguise, met Tana Shah and repaid the amount used by Ramadas. Thus Lord Rama freed Gopanna from imprisonment. Bhakta Ramadas has composed several devotional songs on Lord Rama which are sung as Ramadasu Keertanalu.

As predicted by Sri Rama in Dammaka's dream, a temple was built in 1674 CE by Gopanna. The old tribal woman Pokala Dhammakka recognized Kancherla Goppanna and helped him in the construction of the temple. And finally the idols of Sri Sita sametha Vaikuntha Rama and Lakshmana were installed in the temple. Thus the temple of Lord Rama came into existence.

The temple opens daily at 4.30 a.m for the devotees with 'Prabhatotsavam' (the wake-up ceremony). This is a special ticketed darshan and devotees can take part in the wake-up ceremony where they can sit directly in front of the main deities and have the darshan of Sri Sita Rama and Lakshmana.

Devotees should be at the temple premises at least half-an-hour before the ceremony starts. All the devotees in this special darshan are jam packed in the small premises in front of the sanctum sanctorum. Only on Sundays abhishekam is performed to Sri Rama at 7.00 a.m and on the remaining days, abhishekam to Sri Rama is performed at Bhadruni Sannidhi at the same timings.
There are various 'poojas' / 'sevas' performed at different timings of the day. The temple closes at 8.30 p.m.

The main deity of Rama in the sanctum sanctorum is seen in sitting posture holding a bow, arrow, Sankham and Chakram in His hands with Sita Devi seated in His lap. While Lakshmana is seen standing beside Lord Rama with a bow and arrow in his hand.

Sri Ramanavami is the main festival celebrated in the temple with great devotion. On this day the temple is heavily crowded with devotees from across the country who visit the temple to witness Kalyanotsavam of Sri Rama and Sita Devi. The important festivals like Vaikuntha Ekadasi are celebrated here.

Sree Seeta Raama Kalyanam i.e the celestial marriage ceremony of Seeta Devi with Lord Raama is performed every year in this temple which is watched by thousands of devotees. It has become customary for the Govt of Andhra Pradesh (presently Telangana) to offer silk clothes to the Divine couple on the occasion. The ceremony is aired live on various TV channels including Doordarshan - the govt channel.

Darshan timings and poojas / ticket price in the temple

Bhadrachalam which is located in the Dandakaranya region of Khammam district bordering the state of Jharkhand. It is well connected by rail route with all the important places of the state. Besides the rail route, there are State Road Transport Corporation (APSRTC) buses that ply from every corner of the state. Special buses are arranged by the state RTC on the special occasion of Sri Rama Navami celebrations to meet with heavy in pour of devotees to this place. There are number of trains connecting the place from Hyderbad, Vijayawada, Visakhapatnam, Rajamundry, Tirupati and other places. You can reach the place easily via road / rail.

Bhadrachalam is one of the most important Hindu pilgrim places. There are excellent private hotels, govt guest houses, choultries cottages and tourism dept Haritha resorts / hotel in Bhadrachalam. These are located in beautiful surroundings and are at a close distance to the temple. There are good number of economy and luxury private hotels / lodges in and around the place.

Places to visit near Bhadrachalam

There are many interesting places to visit around Bhadrachalam. The important ones are:

Parnasala is a place which is situated at a distance of around 35 Km from Bhandrachalam. This is an important tourist attraction as it is believed that Lord Rama, Lakshmana and Sita Devi built their hermitage at this place in Dandakaranya and lived here during their exile period in forest. 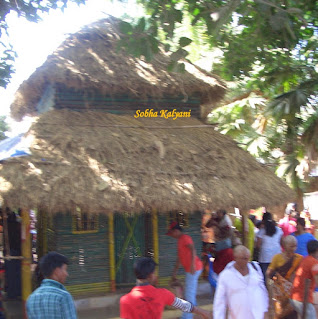 And this is the place where Seeta was abducted by the Raavana, the King of Lank, who came in the disguise of a hermit. 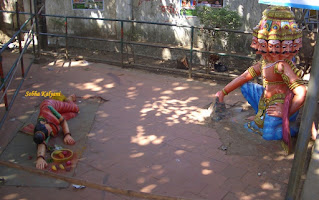 At this place there are life size statues depicting some of the important incidents of the Aranya Kanda of Ramayana.

This is one of the most beautiful route with Mother Nature at her best and a top tourist attraction near Bhadrachalam. A ride in a launch through paapikondalu is a real feast to the eyes. Tourists can go on a thrilling and joyous ride in a launch on the waterways which is a 3 Km stretch on the Bhadrachalam-Rajamandry waterways. As the launch sails in the mighty Godavari, tourists enjoy the scenic view of river that narrows down as it flows through a stretch of hills known as paapikondalu, which gives a life-time thrilling experience. The wonderful ride through the hills is worth riding.

There are many tour packages operated by the govt tourism dept and also by various private launch operators. From Bhadrachalam, tourists need to reach a place called Kunavaram by road, where river Sabari merges with Godavari. Kunavaram is at a distance of about 50 Km from Bhadrachalam and from this place tourists can go on a Motor Launch to Rajahmandry on the river Godavari which is a four and half hours ride. Most of the tour packages come with food provision on board.

This place is located at a distance of 2 Km from Bhadrachalam. It is believed to be the place where the divine vulture (Jataya) waited for Rama till He arrived, after the vulture was injured in the fearful fight with Ravana while he was flying after abducting Sita Devi.

The place where river Sabari joins river Godavari. Legends say that a tribal woman named Dhammakka lived in this place. It is said that Rama appeared in her dreams and told her about the idols that are hidden in the Bhadradri Hills. It is also believed that Lord Rama met the tribal woman Sabari at this place who offered Him local berries. The woman attained moksha i.e. salvation and transformed in river Sabari.
Divine Destinations Telangana Tourist Places