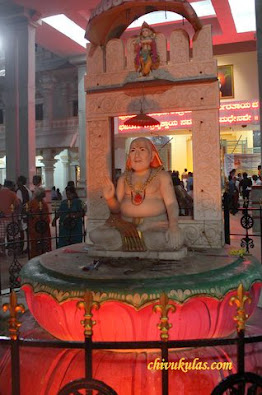 Mantralaya is a small town located in the Kurnool district of Andhra Pradesh bordering Karnataka. The place has become one of the important pilgrim places in the south due to the presence of Moola Brindavan or the samadhi (tomb) of the great Madhwa (follower of Madhwacharya) saint of the 17th century from the South - Sri Guru Raghavendra Swamy. However, he advocated Vaishnavism (follower of Sri Maha Vishnu) and the great saint is considered to be a reincarnation of Bhakta Prahlada - the son of the King Hiranyakasyapa.

The structure of Moola Brindavan resembles that of a Tulasi Kota - the typical square shaped pot specially designed for planting the sacred basil / Tulasi plant. The samadhi of the great saint is a Mutt which lies on the banks of River Tuganbhadra.

There is a road station at Mantralayam which is around 12 Km from Sri Guru Raghavendra Swamy Mutt. There are trains from many important places like Chennai, Mumbai, Bengaluru and Hyderabad. There are even good number of buses operated by the State Road Transport Corporations of Andhra Pradesh, Telangana and Karnataka.

A road trip to Mantralayam from Hyderabad is an enjoyable one. You can ride en-route Jadcherla, Mahabubnagar and Raichur (Karnataka) which is a shorter route to reach Mantralayam. However, the roads in the one and half hour road route of Raichur are not in a good condition.

Mantralayam is one of the important pilgrim places, so there is no dearth of economy hotels. There is a row of Vasati Gruhams (Guest Houses) very close to the Mutt. There are even good number of private lodges and also Punnami Guest House of Andhra Pradesh Tourism Development Corporation. These hotels / guest houses provide AC as well as non-AC rooms at reasonable price. However, you have to compromise with the food in this place. You don't get tasty food in most of the hotels.

Information on Poojas / Sevas in the temple

There is a belief that people who visit the Mutt for the darshan of Moola Brindavan of Sri Guru Raghavendra, need to first visit the temple of Manchalamma - the local presiding deity of the place. The town got its name from goddess Manchalamma and was known as Manchale village which transformed to Mantralaya over a period of time. The small temple of goddess Manchalamma is situated to the left of the main temple / mutt.

An important point to be noted here is when you go for the darshan of Moola Brindavan of Guru Raghavenda, men are supposed to go with bare chest. Men wearing shirts and banyans need to remove it before entering the temple premises. Though no strict dress code for the ladies, yet it is advisable to go in traditional wear like sari, salwar or long skirts.

While your return, you can visit the ancient famous temple of 'Pancha Mukhi Hanuman' which is at a distance of around half-an-hour drive from Mantralaya. The temple is in Raichur, Karnataka, it is believed that Guru Raghavendra meditated at this place when Lord Hanuman appeared in his vision and blessed the saint.
Andhra Pradesh Divine Destinations Tourist Places