U.S. Travel Diaries - A walk in the Times Square and an exciting cruise on River Hudson in New York City

- April 11, 2019
During our stay in Chicago, IL, we (self and spouse) went on tour to Niagara Falls, Washington D.C and New York City (NYC) - a dream destination of a majority of tourists in June / July 2010 for the first time and later in September 2013 we (self, spouse and my daughter) visited NYC for the second time.

The Statue of Liberty on river Hudson, the bustling streets in Times Square, viewing NYC from the Empire State Building, UNO (United Nations Organisation) are some of the popular tourist attractions of NYC.

In our first visit to the NYC we took 48 hours hop-on hop-off sight-seeing in grayline open top double-decker bus. We considered hop-on hop-off double decker bus as the best option as this tour covers many important attractions of NYC. 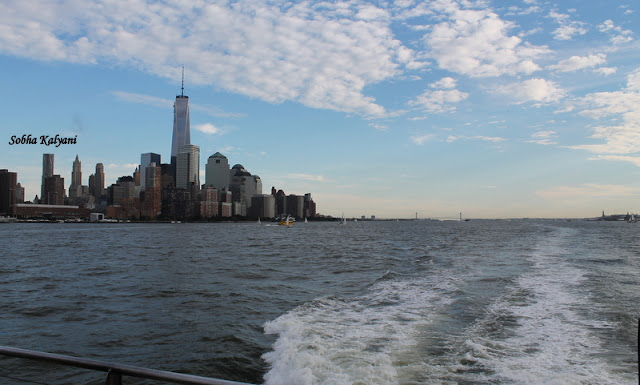 On the first day of our stay in the NYC, we hopped off at some place near Staten Island. The weather was pleasant and sunny. We took tickets at the counter for a 90-minute City Sightseeing Skyline Cruise and embarked the Ferry. There is also Staten Island Ferry which is a free service provided by the city. After embarking the ship we sat comfortably in a shady place in the outdoor of the upper deck. As the ship moved on River Hudson, the tourists watched the skyscrapers of NYC shoreline. 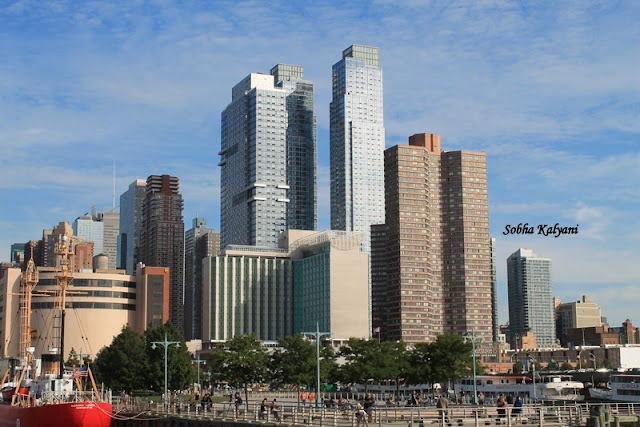 We did not visit the Statue of Liberty but the cruise took us close to this National Monument where we could take few clicks. 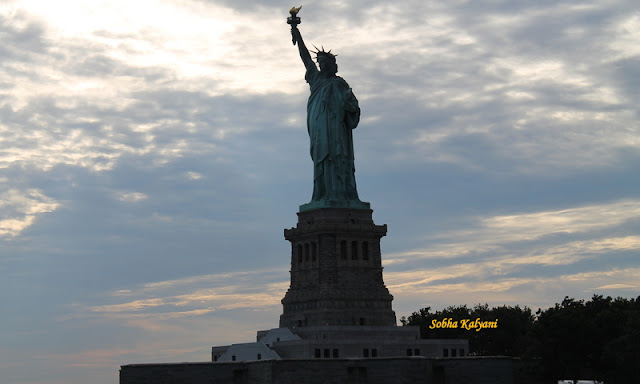 It was afternoon by the time we returned from the cruise. We had some light veggie food and hopped on the grayline bus and proceeded to UNO for a guided tour.

In our second visit to the NYC in September 2013 we strolled for some time in the busy streets of Times Square shopping for a while. As it was a cool breezy day we enjoyed moving around Times Square 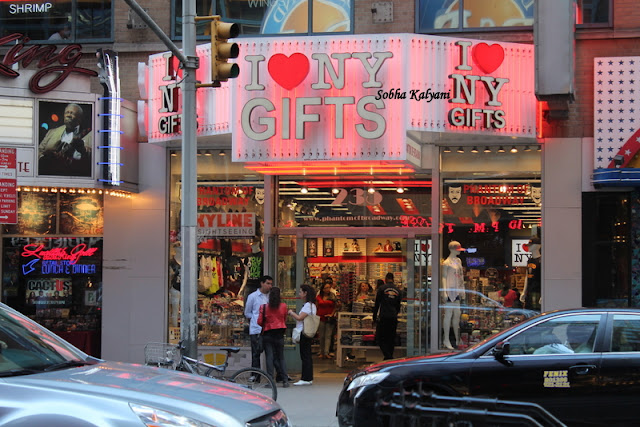 We took a couple of souvenirs, T shirts and few gift items like The Statue of Liberty. The streets in Times Square were heavily crowded with people moving in all directions. 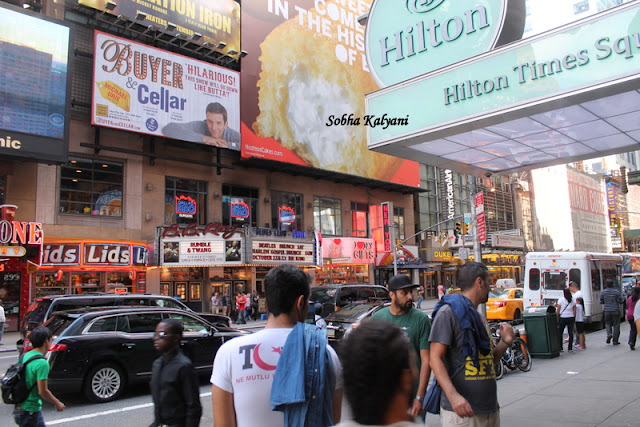 We walked inside Ripley's Believe it or not though didn't find it interesting. We then had a refreshing coffee at our favorite Starbucks and then took a public transit bus to the waterfront. This place too was heavily crowded with tourists. We took tickets for a cruise in the water taxi which was ready to start. 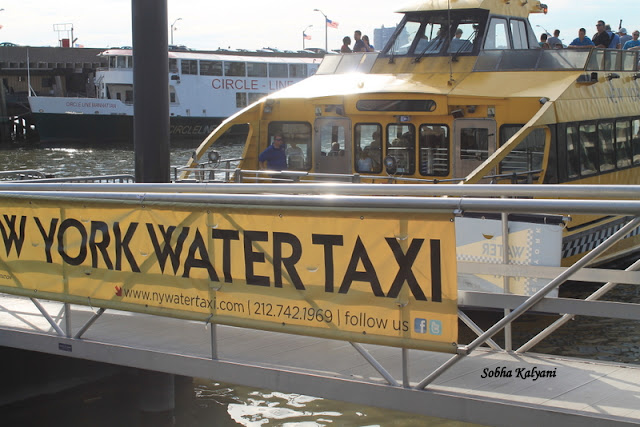 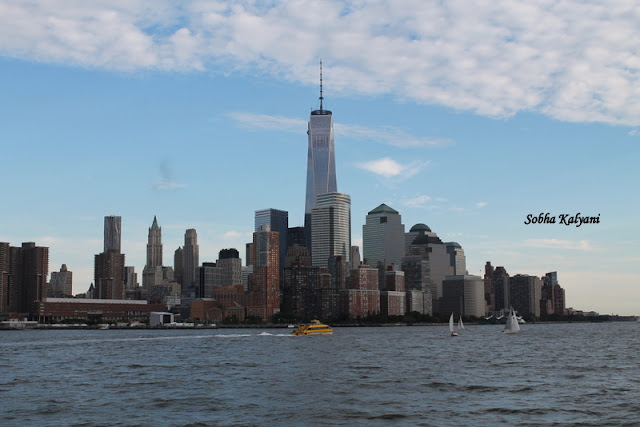 As it's September slowly the sunny weather turned cloudy and the shoreline was getting hazy. We could see the Empire State Building in the hazy weather and I took few clicks of the building. 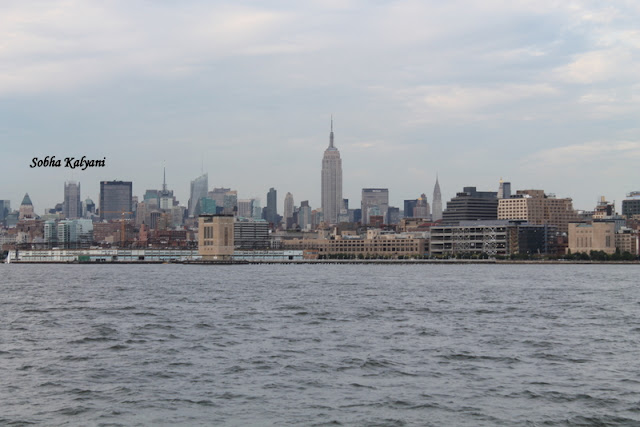 The tourists were awed and cheered in excitement as the water taxi approached Brooklyn Bridge. 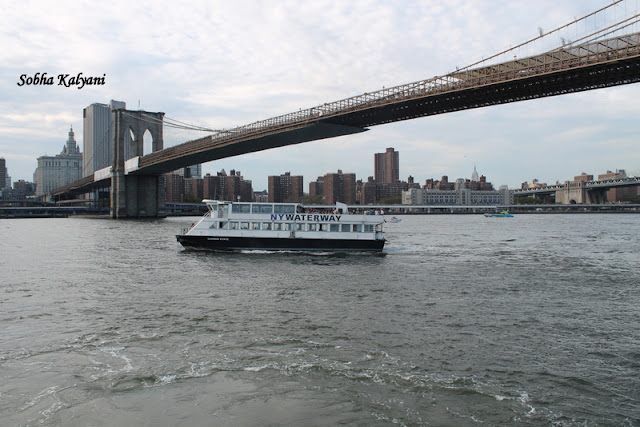 The excitement of tourists doubled as the taxi passed right under the bridge. We could see other water taxis passing underneath the bridge. 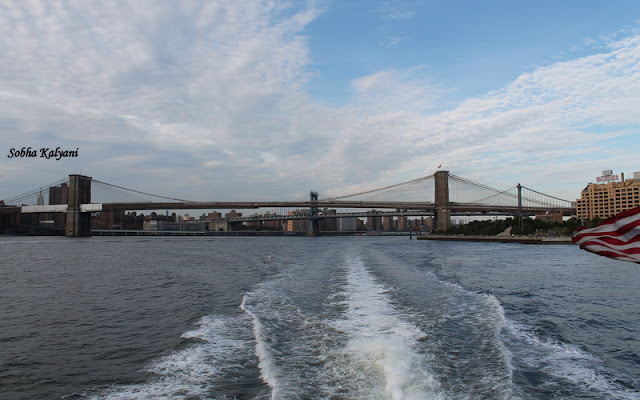