- March 15, 2019
Summer is the most awaited season in the U.S. It's a time when people to go on tours with family and friends. During our stay in Chicago, IL we had been to Wisconsin Dells in May 2010. This place is popular for its water parks and theme parks. Wisconsin Dells is in the mid-west region in the state of Wisconsin. The city is naturally beautiful with the gorges featured with sandstone formations and with the dells of the Wisconsin river. 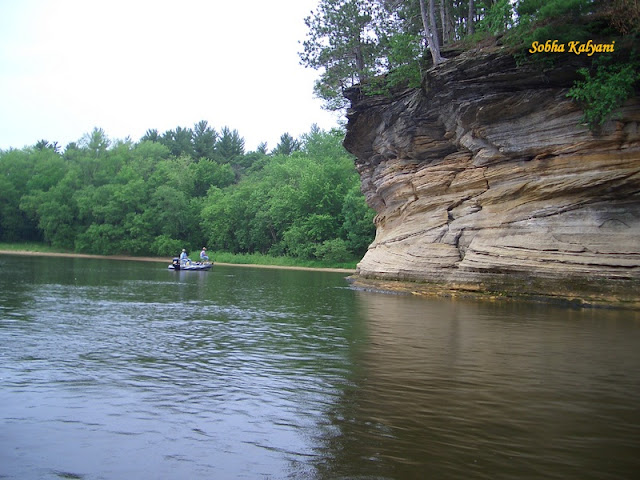 On reaching the place at noon we directly went to the resort where we had booked an accommodation. We planned to stay only for a day in Wisconsin Dells, so we refreshed and we went on stroll for sometime. At around 3.30 in the afternoon we went on a thrilling guided Army Duck tour.

These Army Ducks provide a unique way of experiencing Wisconsin Dells. Tourists enjoy the natural beauty of the surroundings riding on these ducks.

These ducks are amphibious which means these ride on the land and also in the river water. These are originally the Army Ducks of Dells which were used during World War-II. Now, these Ducks, actually the trucks that can move both on land and in water, have become one of the most popular attractions of Wisconsin Dells and provide a thrilling experience in the 1 hour land-and-water ride on the Lower Dell river and Lake Delton.

There were no big lines so we could easily get tickets at the entrance. We then board one of the Ducks that was ready to depart. This is a guided tour and the ducks depart at every 15-20 minutes. As the duck boat was full of on-boarders, it started with a siren horn. The driver started guiding the tourists and was telling about the interesting things about the place. The Army Duck moved on and on, on the roads. 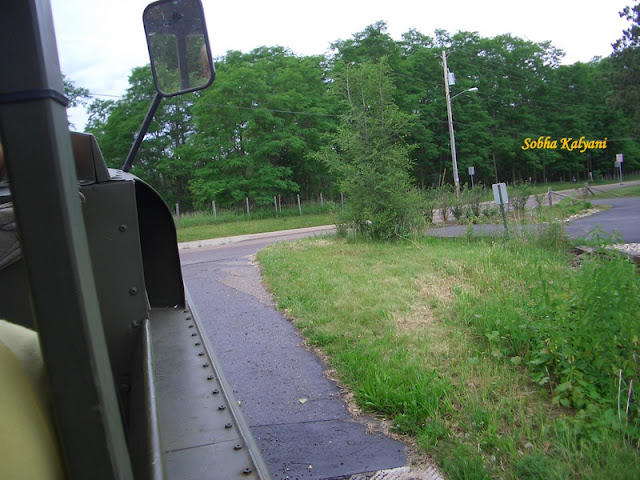 The tourists were busy capturing the moments in cams and videos and listening to the running commentary of the driver. Gradually the Duck slowed down as it came closer and closer and closer to the Lower Dell river. I was peeping out and lo! it splashed into the waters while the on-boarders screamed / shouted in thrill and excitement.

Watch the video:
O my god! it was a fun-cum-thrill. Until then the duck was moving on the road and suddenly it entered into the waters and started moving in the water. That was a real fun and thrilling experience for us riding in the duck and watching the scenic wilderness. 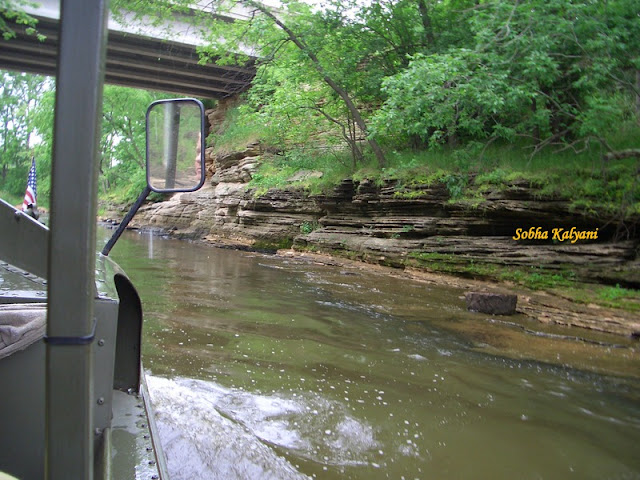 As the Duck moved on and on in the waters, we / the tourists were awed on seeing the beautiful natural rock formations of sandstone on either sides. 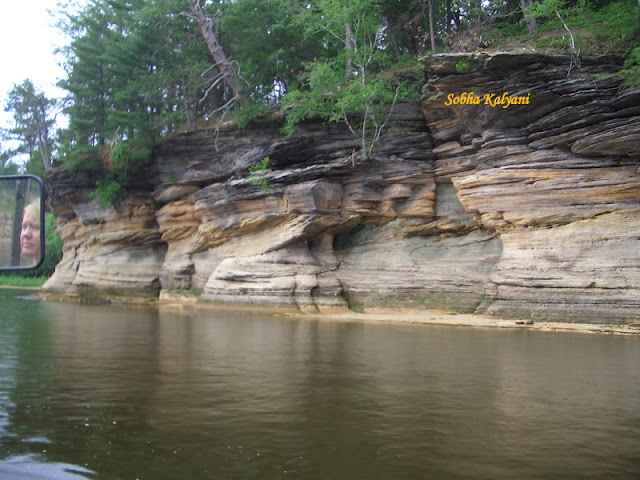 I, being a nature-lover, enjoyed it the most. The beautiful rock formations with caves at some places and the river waters flowers in-between is really fantastic. 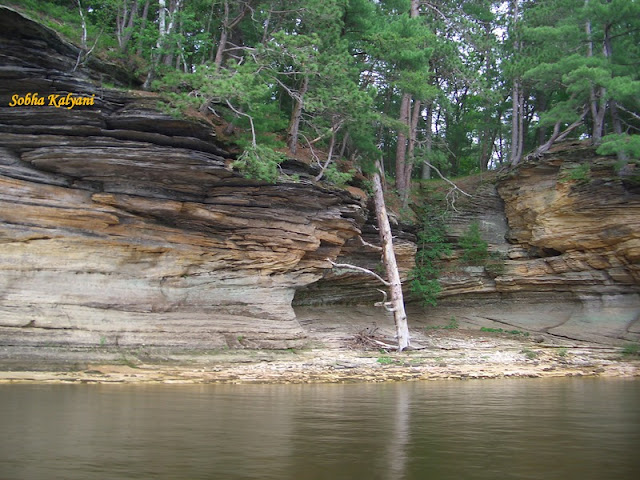 As it was summer time, there were many who were enjoying water sports, rowing and speed boats in the river.

The river water flowing with the natural rock formations on either side. 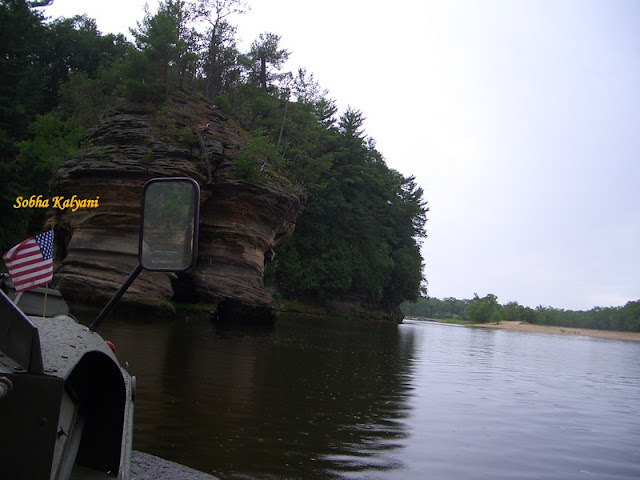 is a real feast to the eyes. 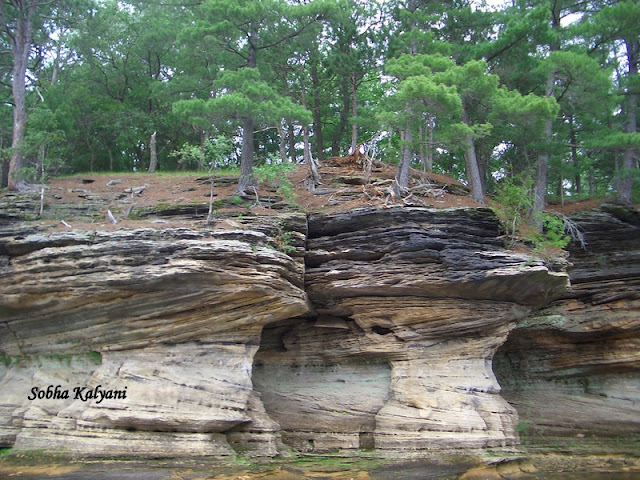 After going through many twists, the Army Duck again moved on to the road and dropped us at the same spot. It was a wonderful thrilling ride in the amphibious ducks which can move both on road and in water. And of course, it was a real fun too.

After the army duck tour, we went on a classic 45-minute boat tour on river Dell in a rainy weather.

Wisconsin Dells is in the mid-west region and many tourists visit the place to enjoy the water splashes / rides in the water parks during summer - the best time to visit the place. The place is not heavily crowded even in summer, so one can easily get accommodation in the hotels. Food is okay however Indians and South Indians in particular, need to comprise with the foods for a day's stay or two day's stay.
Tourist Places U.S.A Wisconsin Dells