- December 29, 2018
Being a South Indian, I haven't seen / experienced snowfall till I had been to Chicago, IL in 2009. I used to enjoy watching the beautiful snowfall scenes in Bollywood / Tollywood (Telugu) movies.
Somewhere deep in my heart, I had the desire to see / experience snowfall, but it remained a dream till 2008.

My dreams were materialized when we (self and spouse) moved to Chicago in 2009 on an assignment and lived there for nerly 2 years.

Like most of the newly moved Indian home-makers to the U.S, I too was confined to the four walls and was wondering how to kill my time. Once in a while I used to peep out through the window / french door of the balcony and could hardly see anyone on the roads / around. It's during the lunch hour, I could see very few people walking around and was feeling too happy to see few familiar Indian faces. 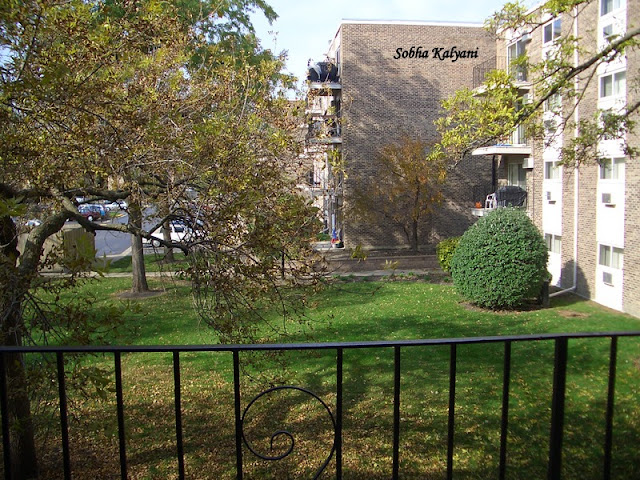 In the above you can see the view taken during spring from the glass door of the flat in the 2nd floor.

Chicago is known as the 'Windy City' and the weather here is too crazy and unpredictable. At this place I got the chance of experiencing snowfall for the first time in my life in 2009. Besides the exciting experience of snowfall, we also experienced the severe snowstorm on Jan 31, Feb 1 and 2, 2011 which was one of the worst snowstorms in Chicago with heavy snowfall of 21.2 inches of snow and blizzard conditions and ice accumulation in the pathways.

Before penning down about the worst snowstorm that we experienced in Chicago in Febuary 2011, I would like to pen down about how I felt on watching snowfall from the french door for the first time in my life. It was around Christmas time and mostly the weather in Chicago remained cloudy during this time with light to heavy rainfall at times.

There was sereneness all around after the lunch hour as people go back to their offices, of course those who used to come home for lunch. I was just idling out my time after lunch, peeing through the french door of the balcony as always. The weather on that was too cloudy and of course windy. As I was peeping out, I could see some small light white particles floating in the air and then gradually falling down on the ground. I did not not realize that it is light snowfall. At that time I got a call from my husband who asked me to peep through the glass door to see the light snowfall. At that moment, I said excitedly that yes I'm watching it without knowing that it's snowfall and wondering what could be those white feather-like small things falling. 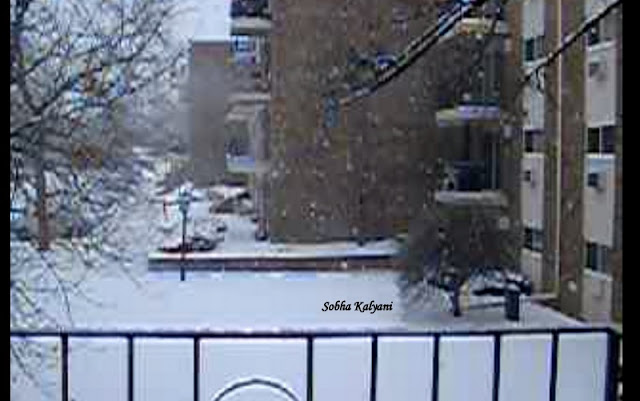 That's the picture of the same view as seen from the glass door of the flat during snowfall.

When I came to know that it was snowfall, I was very much excited. I forgot everything and just kept watching and watching the light snowfall till it slowed down and stopped. I took a video shot of it and shared it with my parents / in-laws in India.

That was a really unforgettable exciting experience for me to watch snowfall for the first time in my life. Over a period of time, I got used to snowfalls and snowstorms and was confined to the four falls with the heating system inside.

On New Year's day in 2010, we visited SVS Balaji temple in Aurora, IL. Despite of heavy snowfall the previous night, there was heavy crowd in the temple and even there was a diversion for entry into the temple.

As I was walking precariously on the icy walkway, I was surprised on seeing few people (adults) skidding and falling down with a 'thud' on the ground. I felt pity for them and then one of our friends told that we need to walk very carefully on the icy paths / roads.

After snowfall, the snow is removed and heaped up on the roadside which look like a heap of salt. One such picture taken near Target in Glenview, Chicago. 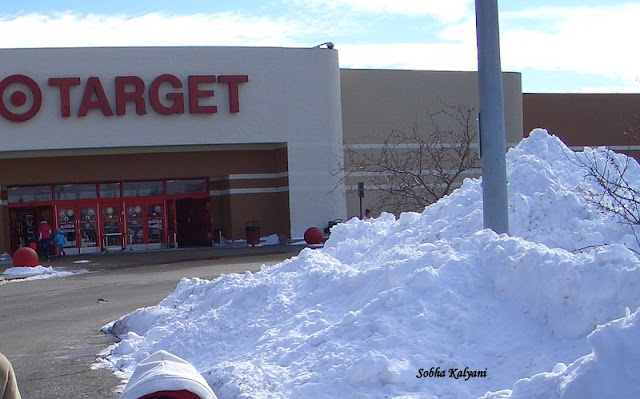 The worst part of snowfall is scraping snow off the cars.

And driving on the snowy / icy roads. The above pic is taken in Columbus, Ohio. For a South Indian, it's enjoyable in the beginning but I think later on they get disgusted as they cannot move out without the heavy woolen garments and shoes.
Chicago U.S.A