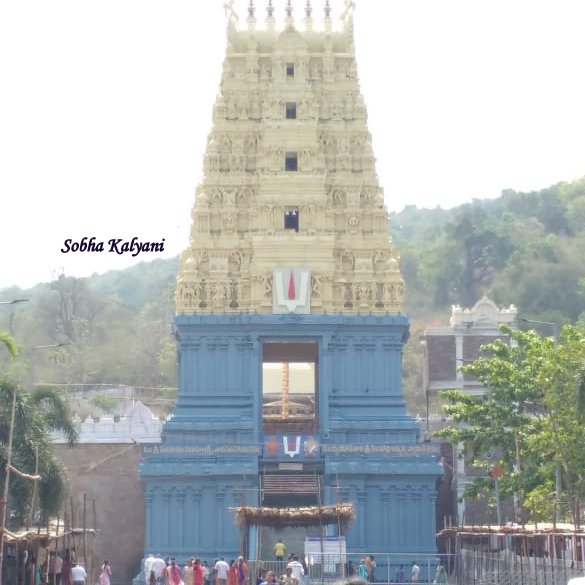 The temple of Sri Varaha Narasimha Swamy is located in Simhachalam, very close to Visakhapatnam, one of the fast developing cities in the east coast of Andhra Pradesh.

The city is known for its natural beauty and has much tourist potential, virgin beaches and pristine sea waters. The city lies on the main line of Howrah-Madras mail and is easily accessible. The local people are innocent, lovable and hospitable too. The ancient temple of Lord Varaha Lakshmi Narasimha Swamy at Simhachalam is one of the important temples of A.P.

On this auspicious day devotees are allowed to have the darshan of Moolavirat or Nijaroopa Darshan of the original deity of Sri Varaha Lakshmi Narasimha Swamy. And late night on this day a fresh coat of sandalwood paste is smeared on the deity after the darshan is stopped for devotees. Hence devotees throng to the temple on this auspicious day to have the Nijaroopa Darshanam of the Lord.

The temple opens daily at 4.00 a.m with the Suprabhatam.

You can easily reach the temple by road from Visakhapatnam which is on the Howrah-Chennai main line. You can either take a cab or take the State Road Transport Corporation (APSRTC) bus or any other private bus which frequently ply from various places in Visakhapatnam

Accommodation There are a number of budget as well as luxury hotels in and around Visakhapatnam. And you can get almost international standard rooms at a reasonably good price in these hotels like Hotel Dasapalla, Hotel Dolphin, Fortune Inn, The Taj, The Park Hotel etc.