Bhogi Panduga - The Most Important Festival Of Andhra Pradesh

- January 07, 2012
Bhogi is the most important festival of Andhra Pradesh. It is the 1st day of the 4-day Sankranti Panduga (festival). It is an important social festival of the Telugu people. It is a harvest festival when the farmers express their gratitude to Varuna Deva i.e the god of rains. It is the thanksgiving festival of the villagers. Farmers thank the cattle for being helpful to them.

Day 1 - Bhogi - the festival with Bhogi mantalu, bhogi pallu and many more.
Day 2 - Makara Sankranti with Sankranti muggulu, bommala koluvu etc
Day 3 - Kanuma - the thanksgiving festival celebrated by the farmers
Day 4 - Mukkanuma celebrated with kodi pandelu i.e cock-fight (presently an illegal activity because of the harm it causes to the people involved).

Bhogi falls on the 13th / 14th January every year. The day before Makara Sankranti is celebrated as Bhogi. It is a festival of family gathering that brings joy and happiness in the families. The married daughters of the family visit their parents' house along with their husbands and children. The festival is very special for 'kotha allullu' i.e new sons-in-law. It is compulsory for the newly wed daughters to visit their parents' house along with their husband.

The festival involves lots of preparation well in advance which includes clutter-clearing, whitewashing / painting the house, decorating the house and compulsory purchase of clothes for the all the members of the family including the servants of the house. This is the biggest festival of the year and heavy discounts are offered on most of the products, particularly on clothes. Shopping malls are heavily crowded with shoppers. 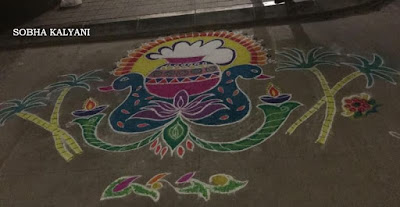 Muggulu i.e floral designs on the floor are the special attraction of Sankranti festival celebrations. Women folk, young and old, are engaged in drawing muggulu (rangolis) with a competitive spirit. These are so special that various organizations conduct Sankranti muggula poteelu i.e. rangoli competitions where the ladies are given a chance to showcase their expertise / talent.

Gobbillu is a Telugu word for small cow dung balls. It is an age old tradition in Andhra Pradesh to place 'gobbillu' on the 'Sankranti muggulu'. Young girls make gobbillu, apply pasupu (turmeric) / kumkum on these and place the balls on the muggulu. A pumpkin flower / marigold flower / chrysanthemum flower is placed on each of the cow dung ball. Unmarried young girls of the surrounding houses gather round the muggulu, dance round it singing songs in praise of Lord Krishna. The next day, dried up gobbillu are collected and kept separately which are thrown in the Bhogi Mantalu. 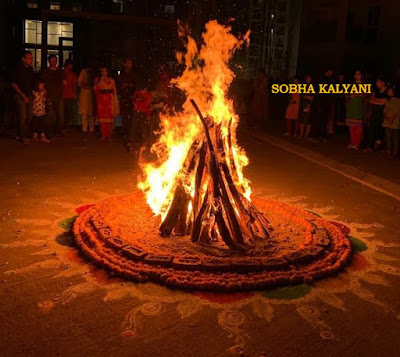 On Bhogi day, early in the morning before sunrise, a bonfire is set in front of the house. This bonfire is called Bhogi Mantalu in Telugu. This is set either individually by each household or set at the community level. All the wooden waste, dried twigs or branches from the house and the dried up gobbillu are thrown in the Bhogi Mantalu. In the olden days, people used to sit around the bonfire to warm up themselves in the chill weather. But these days, due to global warming, people no more gather round the bonfire to warm up.

Gangireddu / Basavanna is the most common sight in any village or town of Andhra Pradesh during the festival period. Basavanna are the men who beg alms carrying a gangireddu (bull). Basavanna plays folk tunes on a sannai (clarinet) while the bull dances to his tunes with nodding head. Usually Basavanna accepts old clothes which are placed on the bull and few coins by praising and blessing the members of the household. This is a kind of charitable activity and at the same time one can get rid of the old and unused clothes.

This is another important aspect of the festive celebrations in Andhra Pradesh. Haridaasulu also beg alms mostly rice grains and these men are very much different in their costume which resembles the costume of Naarada Mahaamuni. These men hold a small Veena - the stringed musical instrument on one hand and chidatalu - a pair of wooden blocks used as cymbals in the other hand. The hard yellow shell (out covering) of yellow pumpkin (tiya gummadi) is placed on his head. He uses this as a container and accepts grains in it. When the lady of the house comes out with handful of grains, Haridasu bends down on his knees and the lady pours the grains in this pumpkin-shell container. Then, he bless her sayings the words 'Krishnaarpan' which means 'offered to Lord Krishna'. 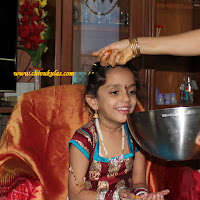 Bhogi Pallu is a very important celebration of Bhogi panduga. Children in the household, from months babies to five years old are involved in this. Bhogi pallu are showered on their head as it is believed that it casts off evil eyes. 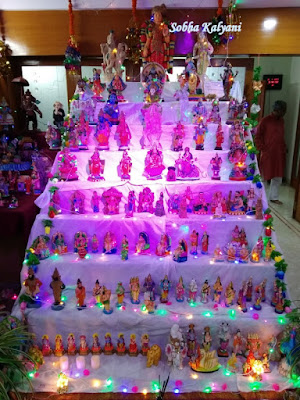 Bommala koluvu is a main activity of Makara Sankranti. Young girls neatly arrange and display their bommalu i.e dolls in a beautiful way. By doing so, the young girls are encouraged to showcase their talent and learn to keep their things in an organized way. Friends and relatives are invited to see the array of dolls. This is a way of inculcating the habit of socializing in the young girls.

Unfortunately due to various reasons, many of these age old traditions / healthy practices of Andhra Pradesh which have their own benefits for the individual and the society, are fading away. Some of these are at the verge of disappearing. The newer generations are completely unaware of many of the rich traditions and varied culture of the state. It would be great if the Telugu people feel responsible in preserving the rich and varied cultural heritage of the state and pass on the same to the future generations.

Kodi Pandem or cock-fight is an age old traditional sport played on Mukkanuma day during the Sankranti time. This is mostly played in the North coastal districts of Andhra Pradesh. This traditional sport has changed in the recent past and this is mostly played as a symbol of supremacy. Specially trained cocks are forced to fight which sheds lot of blood and sometimes leads to the death of either or both the cocks. Unfortunately, there is also heavy betting among the individuals during this time. However, this is not a good practice and it has now become an illegal activity.

As per historical records, the famous Bobbili Yudham - a fearful battle between the neighboring kingdoms of Bobbili and Vizianagaram was an outcome of such a kodi padem.

In Telangana state kite-flying competition is an important activity of Makara Sankranti. Men of all age group take part in the competitions and enjoy flying colorful kites of different shapes. This culture is been adopted from the Jaipur (Rajasthan) Kite Festival that is celebrated on Makara Sankranti day. From 2016 Telangana tourism has started organizing International Kite Festival every year during Sankranti for 2-3 days.