Srikalahasti - One Of The Pancha Bhoota Shivalnga Temples

- February 23, 2020
Srikalahasti is a small temple town in the Chittoor district of Andhra Pradesh. The town is located on the banks of Swarnamukhi river. The town gained popularity due to Srikalahateeswara temple which is one of the Pancha Bhoota Sthalams.

There are package tours offered by both APSRTC and private buses to visit few temples around Tirupati which include Mangapuram (aka Tiruchanoor) Padmavati temple, Kalyana Venkateswara temple in Srinivasa Mangapuram and Srikalahasti. There are also many private cabs from Tirupati to Srikalahasti at reasonable rates. 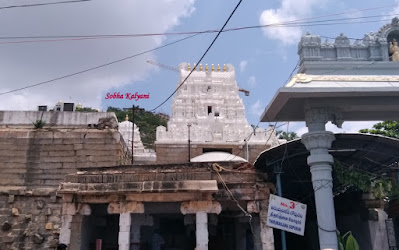 The temple of Srikalahasteeswara is dedicated to Lord Shiva. The presiding deity of the temple, Srikalahasteeswara is in the form of Vayu Linga. This temple is one of the Panchabhoota Sthalams in South India. Besides the famous Vayu Linga, the temple gained popularity for Rahu-Ketu pooja as well. Parvati Devi, the Divine consort of Lord Shiva, is worshiped in the name of Sri Gyana Prasunamba.

Also read: This is the only Hindu temple in India which remains open during eclipse time (solar and lunar) while all the other Hindu temples are closed during the eclipse time.

The temple is located in a small temple town named Srikalahasti which derived its name from the local deity. Srikalahasti is located at a distance of 40-45 minutes drive from Tirupati in the Chittoor district of Andhra Pradesh.

A majority of pilgrims who visit Tirumala, also visit Srikalasti temple. The inscriptions of the temple date back to the 10th century C.E (Current Era). 'Srikalahasti Satakam', a Telugu poem, describes about the temple traditions.

The main entrance tower (Gali Gopuram in Telugu) is built by Sri Krishnadevaraya during the early 16th century C.E. On entering inside the temple premises there is a shrine of Patala Ganapati (underground Ganesha) where there will be a long line of devotees. People have to bend down and crawl through the narrow and go down the steep and narrow steps. On going down the steps there is a stone idol of Ganesha in a very small space which can accommodate just a couple of devotees at a time. After one set of devotees crawl out of the hole / opening after having the darshan, the next set of devotees (hardly 3-4 people) are allowed to crawl inside. So, there is much of waiting in the long lines at this place.

Almost through out the year, the temple is crowded with devotees. There is no advance booking / online booking of tickets for various darshans / sevas. Pilgrims have to buy tickets from the counter. The temple opens at 5.30 a.m with Suprabhatam which is followed by Sarva darshan and various sevas / pujas through out the day. The temple closes at 9 p.m every day and at 9.30 p.m on Saturdays, Sundays and Mondays.

The main temple of Srikalahateeswara and Sri Gyana Prasunamba is located in the spacious inner premises of the temple. In this temple, Goddess Parvati, the divine consort of Lord Shiva is known as Sri Gyana Prasunamba. The Shiva Lingam inside the main temple is a Vayu Lingam (air). There is no dome-shaped Lingam on the base as in normal Shiva Lingas. A hollow cylindrical structure is placed on the base as seen in the above picture. It is said / believed that there is a continuous flow of air from the hole of the base due to which the flames of lamps lit of the sides keep flickering.

If you visit the temple when the crowd is relatively less then you can easily watch / make out the hollow vayu lingam and the flickering of the flames. But such occasion is very rare as the temple is heavily crowded through out the year.

However, I feel myself blessed as a couple of times we got the opportunity to have a very close darshan of the Vayu Lingam standing right in front of the main idol. From here devotees continue to walk in lines for having the darshan of Goddess Sri Gyana Prasunamba. Here too we had the close darshan of the darshan by standing right in front of the main idol. We also performed kumkumarchana (worshiping the goddess with vermilion) to the goddess. From here devotees walk out and go round the premises inside the temple. There are many lingams all around inside premises. There is also a Spatika (crystal gemstone) lingam installed by Adi Shankaracharya.. There is a stone idol of Shaneeswara (Saturn - one of the Navagrahas) where devotees perform puja. There is also a shrine of Dakshina Murty inside the main temple premises.

After going round the premises inside, there are certain spots on the floor / pillar marked in yellow where from you can have Shikhara darshan (viewing the gopuram of the main temple) and also have a view of Kannappa konda, the hill on which the tribe used to live.

It is said that the temple derived its name from a spider (known as Sri in Sanskrit), a cobra (kala in Sanskrit) and an elephant (hasti). As per the sthalapurana there is a story about these three creatures were staunch devotees of Lord Shiva and they used to daily worship the Lingam. Lord Shiva appeared before the three creature and blessed them with moksha (salvation). As per another legend, there another story related to the temple. It is about a local tribe named Tinnadu, who later became Bhakta Kannappa due to his unaltered devotion towards Lord Shiva. Stay tuned to read the story of Bhakta Kannappa.
Andhra Pradesh Divine Destinations Tourist Places