Memorable Trip to The Temple Towns In Tamil Nadu

- December 14, 2019
Tamil Nadu is famous for ancient temples with huge imposing gopurams (entrance tower gates). The more one explores these temples, the more there will be to explore. In the beginning of this year (2019), we went on a memorable family trip to Thiruvananthapuram, Kanyakumar, Maduari and Rameswaram. And at the end of the year we went on exploring few more interesting ancient Hindu temples in Tamil Nadu in the auspicious Hindu month of Kartikam.

Our journey started from Vijayawada, Andhra Pradesh and we reached Tiruchirapalli (aka Trichy) on November 21st at around 12 noon. We took a cab and reached the hotel where we had a pre-booked accommodation. After refreshing ourselves, we had our lunch and then had an afternoon / after-lunch nap.

A friend arranged an Innova with a friendly driver named Sivakumar for our local visits. We started from the hotel at around 3 p.m and visited 3 temples.

This is one of the famous temples in Tiruchirapalli. The main deity here is Goddess Maha Kali (Adi Shakti) who is known by the name Samayapurathai or Mariamman. The uniqueness of the temple is that the main deity is made of sand / clay and hence no 'abhishekams' (holy pouring) are performed here to the main deity. Goddess Mariamman is the local goddess (i.e. Grama Devata) and hence is believed to have immense powers. We had the darshan of the goddess and proceeded to Sri Ranganatha Swamy temple.

Our next visit was to Jambukeshwara temple, Jambukeswaram in Tiruchirapalli district. This temple is one of the Pancha Bhoota Sthalams in South India. Lord Shiva is worshiped in the form of Jala Lingam in this temple which remains immersed in a pool of water. Goddess Parvati Devi, the divine consort of Lord Shiva, is worshiped as Akhilandeswari. The temple was built around 1800 years back by one of the early Chola kings.

After getting recharged with divine vibes visiting the temples in and around Tiruchirapalli, we returned to our hotel for night stay.

The next day we had an early morning breakfast, checked out of the hotel and proceeded to Thanjavur (aka Tanjore). On the way we stopped for a while at Rockfort temple.

The temple, also called Uchchi Pillaiyar Kovil, is located in Tiruchirapalli. The temple complex is a 83 m high rock structure with a flight of 437 steps. It is said to be one of the oldest rock formations in the world. There are 3 temples in the complex - Vinayaka (Ganesha) temple at the foot of the hill, Uchchi Pillayar (Ganesha) at the topmost hill and Thayumanavar Koil in the mid-way, a temple dedicated to Shiva. The temple is of historical importance and attracts good number of tourists who can have a beautiful view of the town and other landmarks from atop.

We couldn't make it to the top of the fort but just visited the temple at the foothill and proceeded to Thanjavur. On reaching Thanjavur, we headed towards The Big Temple (aka Brihadeeswara temple).

It started drizzling as we reached the Big temple and the weather turned cool and pleasant. The magnificent temple and the imposing South Indian style temple architecture need no description. They are astounding which reminded us of the great heritage of the ancient times. As we went round the temple premises we felt blessed on seeing a number of Shiva Lingams in the Holy month of Kartikam.

After spending some in the divine ambiance, we headed towards Bangaru Kamakshi Amman temple in Thanjavur.

Bangaru Kamakshi Amman is the presiding deity of the temple. It was built in 18th century CE (Current Era) during the rule of Maratha King Pratap Singh Bhonsle of Thanjavur. We performed kumkumarchana (worshiping the goddess with vermilion) to Kamakshi Amman in the temple. For a break from temple visits, We then went to Saraswati Mahal Library in Thajavur.

This is one of the oldest libraries in Asia which has a rare collection of palm-leaf manuscripts written in Tamil and Sanskrit. 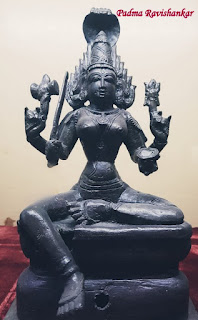 We walked round the library exploring the ancient manuscripts and proceeded to a place where the local artisans make bronze and brass idols. 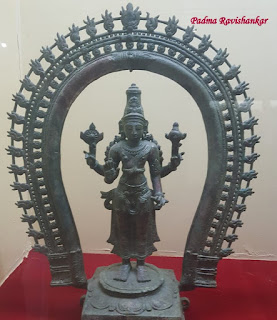 At this place there is rare collection of famous Tanjore paintings and painting of Ravi Verma (Raja Ravi Varma is one of the greatest Indian painters). The artefacts here are quite expensive.

After moving around for a while we had lunch in a nearby hotel and then drove to Chidambaram which is at a distance of nearly 3 hours from Thanjavur. On the way we visited Mahalingeswarar temple at Thiruvidaimarudur.

The temple is located in Tiruvidaimaruthur, a village in Thanjavur district. It is a 9th century CE temple that was built during the reign of Chola dynasty. Lord Shiva is worshiped in the Lingam form (a Jyotimayalingam. ) and is known as Mahalingeswara Swamy. His divine consort Parvati Devi is worshiped here in the name of Pirguchuntarakujambigai. After having the divine darshan, we continued our drive and reached Chidambaram.

By the time we reached the temple, evening aarti was going on.
This temple is also one of the five Panchabhoota Shivalinga temples in South India. In this temple Lord Shiva is worshiped in the form of Aakasa Lingam. The temple was built in 10th century CE during the Chola period. In this temple Shiva is presented in Nataraj (Lord of dance) form performing Ananda Tandavam (the dance of bliss). The temple complex has various small shrines of the earliest known Amman (Goddess Parvati), Surya (Sun) with chariot, Ganehsa, Muruga (Kartikeya) and Vishnu.

We took abhishekam (holy pouring) tickets from the counter and felt blessed to see the abhishekam being performed to Sphatika (crystal gemstone) Lingam. Inside the temple premises there is also a small shrine of Lord Vishnu in reclining posture which reflects the then harmony of Vaishnavism and Shaivism.

After a hectic day visiting temples we proceeded to Kumbakonam which lies in between Tiruchirapalli and Chidambaram. On the way we halted for dinner and reached Kumbakonam at around 10.30 p.m. As we were damn tired, we had a sound sleep.

Kumbakonam is a temple town in Thanjavur district and is located at a distance of 40 Km from Thanjavur. As it was auspicious Ekadasi day, we got up early in the morning and went to Bhagavatha Padithurai bathing ghat on the bank of River Kaveri, situated in the heart of the town.
It was a wonderful experience having a holy dip / bath in River Kaveri in the auspicious Hindu month of Kartikam. After getting ourselves purified in Kaveri waters, we proceeded to Adi Kumbeshwara Swamy temple.

In this temple Lord Shiva is worshiped in Lingam form as Adi Kumbeswara. His divine consort Parvati Devi is worshiped in the name of Mangalambigai Amman. It is believed that the temple town of Kumbakonam derived its name from this 7th century CE temple which is existing from Chola period. The temple complex has many small shrines and halls. After going round the temple we proceeded to another Shiva temple named Airavateswara temple. 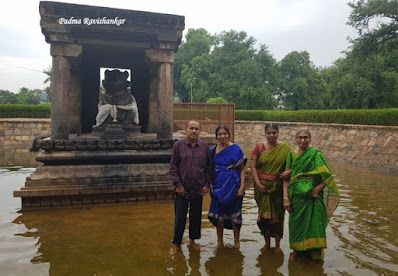 The temple is located in Darasuram near Kumbakonam. This 12th century CE temple was built by Rajaraja Chola. This is a World Heritage Site and is one of the Great Living Chola Temples (a cluster of 18 temples of the medieval era. There is a tank in the temple with a connected channel through which Kaveri waters are brought to the tank. As per the legend carved on the stone, the temple derived its name from Airawat (Indra's divine vehicle / vahana) whose white color was restored after taking a dip in the tank.

This ancient temple is a storehouse of great stone carvings. Tourists who visit the temple and want to know the intricate details need to engage a guide.

In our chain visits to temples, we next went to Nageswaraswamy temple located in the centre of Kumbakonam. The temple is dedicated to Lord Shiva who is worshiped in the name of Nageswara / Nagaraja (the Lord of Serpents). This is one of the prominent Shiva temples in Kumbokonam that reflects the early Chola art of the 9th century CE.

Our next visit was to Uppiliappan temple located near Thirunageswaram which is a village in the outskirts of Kumbakonam. The temple is dedicated to Lord Vishnu who is worshiped as Uppiliappan and His divine consort Lakshmi Devi is worshiped as Bhoomadevi / Bhoodevi (Mother Earth). This temple is one of the Divya Desams (108 Vishnu temples as mentioned in the works of Alwars).

There is also a shrine of Markandeya in the temple premises. It is believed that Uppiliappan appeared before Markandeya at this place. After spending some time in the divine ambiance we proceeded to the Sarangapani temple next temple.

After few temple visits in Kumbakonam, we had lunch and we then went to Thiruvarur - birth place of Tyagaraja, Muthuswami Deekshitar and Shyama Sastry (the Trinity of Carnatic music) and visited Thyagaraja temple which is dedicated to Lord Shiva in the form Marakatha (gemstone emerald) Lingam worshiped as Vanmiganathar. Thiyagaraja is the main deity and Parvati Devi is worshiped as Kondi. This is a 9th century CE temple of the Chola period. We were very much moved and tears rolled down our eyes on seeing the temple priest doing alankaram (decorating) and performing puja with dedication oblivious of the surroundings.

We then visited renowned composer Tyagaraja Swamy's house which is uninhabited. And there ends our visits to temples. From Kumbakonam we directly went to Tiruchirapalli station and boarded the train.

This was my most memorable trip to the temple towns in Tamil Nadu. The Dravidian style temples with exquisite architecture reflect the great culture.
Divine Destinations Tamil Nadu Tourist Places