The Story of Lord Venkateswara of Tirumala - Part 1

- July 29, 2019
Sri Venkateswara Swamy is the presiding deity of Tirumala - Tirupati in Andhra Pradesh. Every year millions of devotees visit the temple to fulfill their vows and seek His blessings. According to 'Sthala puranam' i.e the local ancient texts, here goes the famous story of Lord Venkateswara: 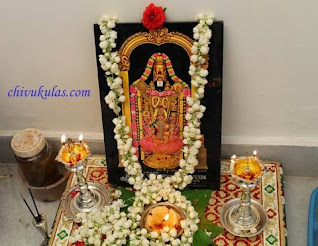 The story of Lord Venkateswara Swamy

In the ancient times much before Kaliyuga, the sages i.e rishis headed by Sage Kashyapa intended to perform a great sacrifice i.e maha yagnam for the welfare of the society. As it was a maha yagnam, the sages wanted to invite one of the Holy Trinity to be the Chief Guest of the occasion. Bhrigu Maharishi takes up the responsibility of inviting the Chief Guest as he has special access to all the lokas (i.e worlds). It is believed that Sage Bhrigu is born with an eye on the under surface of his right foot.

According to the other version of the story, Sage Narada during his course of journey descends on the Earth and knows about the maha yagnam to be performed by the rishis.

The question left the rishis in confusion. They wanted to know the truth so that they can invite the most Supreme one of the Holy Trinity to preside over the occasion.

The great task was assigned to the competent Sage Bhrigu who is unique due to his extra eye.

On reaching Lord Brahma's abode Bhrigu speaks, "O Brahma! this is Sage Bhrigu. I have come to seek the Ultimate Truth". He repeats these words thrice but there is no response from Lord Brahma as He was deeply engrossed in listening to the music played by Goddess Saraswati (His wife) on Her Veena named Madalasa.

As his presence was not noticed by Lord Brahma, the infuriated Bhrigu curses Him saying that Brahma will not be worshiped by the humans on the Earth.

He then proceeds to Kailasa - the abode of Siva. On entering into Kailasa, he repeats the same words thrice, "O Maheswara! (another name of Lord Shiva), Sage Bhrigu has come to seek knowledge".

Here too his presence is unnoticed as Lord Shiva and Parvati are deeply engaged in the pleasant divine dance of Shiva tandavam. Once again Bhrigu gets infuriated and curses Lord Shiva saying, "as you are deeply involved in the pleasant moment with your wife, henceforth you will be worshiped in the form of 'Lingam' by the people on the Earth. ('Lingam' is the male genital organ)

Sage Bhrigu then enters Vaikuntham - the abode of Sri Maha Vishnu. Here too Bhrigu encounters a similar situation. Lord Vishnu was in sleeping posture while His wife Lakshmi Devi is seated at his feet pressing His legs - a typical posture of Lord Vishnu and Goddess Lakshmi in Vaikuntham.