Mythological and Scientific Significance of Deepavali 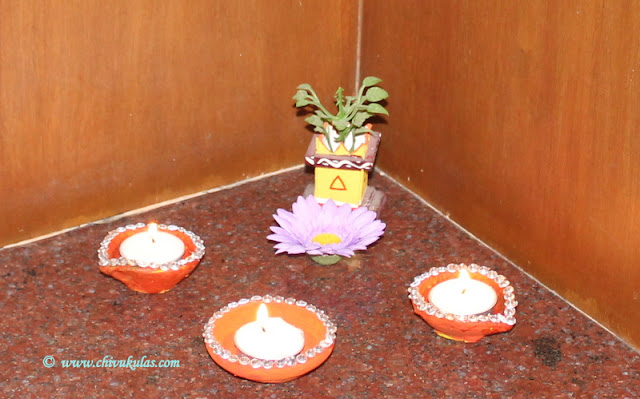 The famous mythological story in South India is Narakasura vadha i.e killing of Narakasura by Satyabha and Lord Krishna in the Dwapara Yuga.

Also read: People in the Dwapara Yuga rejoiced the death of Narakasura a day before Deepavali Amavasya by decorating their homes with fresh seasonal floral garlands and oil lit diyas. It was a gesture of arrival of light / happiness in their lives by removing darkness. It indicates that people in the yuga got rid of the atrocities (darker part in their lives) of the wicked asura.

They happily welcomed their beloved leader Lord Krishna and his wife Satyabhama with fervor and enthusiasm. The tradition of decorating home with earthen / oil lit lamps continued and is being celebrated as Deepavali every year on the Aswayuja Amavasya day.

According to the mythological story in North India, Lord Rama along with his wife Seeta Devi and younger brother Lakshmana reached Ayodhya on this day, after killing King Ravana of Lanka. People rejoiced the home coming of their beloved King and as a gesture of their affection and love for their beloved King, they decorated their homes with fresh floral garlands and lighted earthen lamps and welcomed them in a grand way. The tradition of lighting lamps thus continued and is being celebrated as Deepavali.

As per Puranas i.e the ancient Hindu texts, at the time of Samudra Manthan i.e the churning of ocean, Goddess Lakshmi evolved with dazzling light and jingling sounds from the depths of the ocean on Deepavali Amavasya day. The light spread all over thus killing the darkness of Amavasya. People rejoiced the birth of Lakshmi Devi, the Hindu Goddess of Wealth. They decorated their homes in a traditional way with fresh floral garlands and lighted earthen lamps as a gesture of welcome to Goddess Lakshmi to their homes. The tradition continue and the is being celebrated as Deepavali with much fervor and enthusiasm.

The other lesser known mythological story is that it is on this day the Pandavas (the 5 sons of King Pandu who was the young brother of King Dhritarashtra) returned to Hastinapura, their home town, after the 12 years of exile period and 1 year of incognito period.

The lighted traditional earthen diyas in the dark night of Amavasya signify the elimination of darkness i.e ignorance from our minds. It gives way to light i.e knowledge in our minds - Tamasoma Jyotirgamaya. The festival signifies victory of good over the evil.

The Northern hemisphere starts tilting away from Sun. Sun rises late in the mornings and sets early in the evenings. The days become shorter and shorter with long hours of darkness. The days become colder and colder. To keep the homes illuminated and to keep oneself active during winter, Hindu ancestors have incorporated such healthy practices in the name of festivals.

In the ancient days much importance was given to environment-friendly practices and people were lighting up traditional earthen diyas / lamps and used oil lit lamps. The house was beautifully decorated with fresh seasonal flowers like Marigold and Chrysanthemum. People worship Goddess Lakshmi in the evenings and offer a variety of tasty foods particularly sweets as naivedyam which is distributed among the family members, relatives and friends.

In this way, there is spread of healthy positive vibes with much of happiness and sharing.

However, there is a drastic change in the way of celebrating Deepavali over the period of time. These days people prefer fireworks with a competitive spirit. In the course of their action, they are ignoring the dangers / harmful effects of the festival on the environment and on the the society as well.

Happy, Safe and Environment-friendly Deepavali to All!