London Diaries - Watching the Changing of Guard at Buckingham Palace

In this post I am recalling our (self and husband) short stay in London, one of the dream destinations in the world, in November 2007. We had been to London on an official trip. It was a suspense till the last minute as our visas were not ready. Our flight tickets were booked in Jet Airways and it was just one day before our journey that our visas got approved.

We had too short time for packing our baggage. We were literally on toes shopping all the necessary stuff and then packing up which was done in a day. I took few ready-to-eat veggie stuff for our initial stay as I was in complete darkness about veg food in London.

I was a bit excited as that was my first international flight-experience. It was a night flight, so we could manage to reach RGIA (Rajiv Gandhi International Airport), Hyderabad well ahead of time as we had to go through immigration formalities. As my husband is used to traveling in international flights, he easily completed the formalities and we reached the specified gate after checking-in our baggage. After the flight announcement we walked on the jet bridge to board and I was a bit thrilled as it was my first time experience. 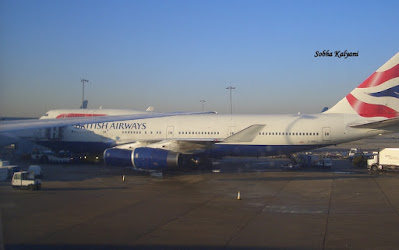 Our flight bound to London took off from Shamshabad airport, Hyderabad at the scheduled time, I think at around 11 p.m IST (Indian Standard Time). We eased ourselves in our seats and after a 9 hours comfortable journey, the flight landed at London Heathrow Airport at around 8 a.m GMT (Greenwich Mean Time). We cleared the formalities, walked out and took a cab to Hotel Marriott at Maida Vale where we booked our accommodation.

On stepping out of the airport, I started shivering as the weather was too chill and cloudy. It was the month of November. 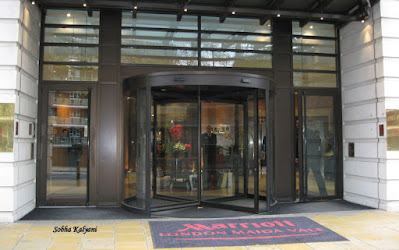 After 9 hours non-stop journey we felt relieved on reaching the hotel room. We spent the whole day relaxing in the hotel to come out of the jet lag.

Next day morning my husband went to his office along with his colleague while I stayed all alone in the hotel room. I felt a bit lonely as I was in a foreign land with completely a different culture than ours (Indian Hindus).

I spent the day sleeping, having a cup of tea and then peeping out through the window and not to find a single soul on the street. I felt strange as we Indians are used to crowd and noise all around.

Our itinerary included only some of the important tourist places like Change of Guard ceremony at Buckingham Palace, London Bridge, London Eye, Madam Tussaud's Wax Museum, House of Parliament and Big Ben.

On the weekend, we walked all the way in the chill weather to Kilburn Tube Station from Hotel Marriott and boarded the tube (train), so far I can remember, it was in Victoria Line. 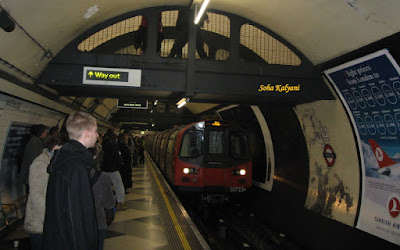 I was awestruck on seeing the well maintained tube stations and the swiftly running tubes. We got down at Green Park Tube Station and walked to Buckingham Palace. It was bright winter day and by the time we reached the location, it was heavily crowded with visitors to watch the Changing of Guards ceremonial event at 11.30 a.m. 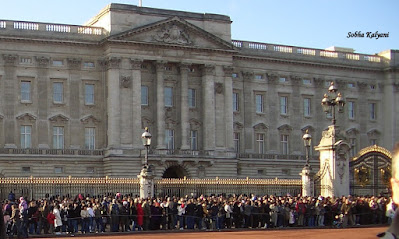 On seeing the magnificent Buckingham Palace, the nursery rhyme 'Pussy cat pussy cat where had you been' flashed in my mind. We moved around in the chill weather for a while capturing pictures of view locations.

Buckingham Palace is the Official Residence of Queen and the Administrative Headquarters of the reigning Monarch of United Kingdom. It is located in the City of Westminister. It was built in 1703 CE (Current Era) for the Duke of Buckingham which was later acquired by King George III in 1761 for the Queen. It became the official residence of the British monarch after it was acquired by Queen Victoria in 1837.

The ceremony of Changing of the Guard at the palace takes place round the year and is the biggest crowd puller event. The ceremony is witnessed by thousands of tourists from across the world. 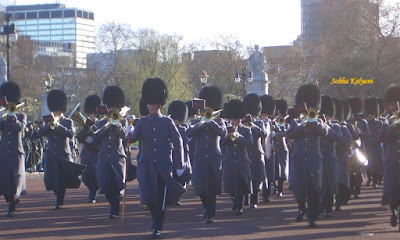 The Changing of Guard ceremony also known as Guard Mounting is the official ceremonial event which is carried out by the on duty soldiers (Old Guards of Queen) who exchange places with the New Guard i.e. handing over of duty to the New Guard. The soldiers march accompanied by a full military band.

The ceremony starts sharp at 11 a.m following a march by a detachment of Old Guard supported with musical band in front of the palace. The New Guard is led by a Regimental Band from the Wellington Barracks. The ceremony lasts for 45 minutes and tickets are not required to watch the ceremony.

The soldiers wear bearskin hats and red tunics. But I was surprised to see the Guard in grey uniform. Don't know the reason why they are in grey tunics. Finally, we watched the entire event of the Change of Guard at the Buckingham Palace. As the tourist dispersed after the event, we too strolled all around and took few quick snaps. 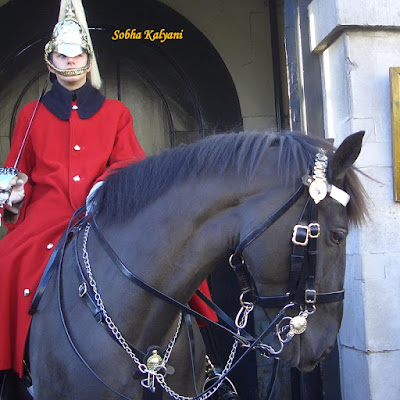 As we walked around, we came across one more interesting place where tourists were flocking and taking quick pics. It is the Guard with long helmet on the horseback who is a part of the Household Cavalry. I was surprised to see the Guard who sat like a statue without either getting disturbed / without moving an inch, as the tourists were standing beside the horse and taking snaps.

Though it's more than a decade the memories of my visit to Buckingham Palace are still fresh. We had some light veggie food in the nearby cafeteria and proceeded towards the tube station where we boarded the tube, I think, bound to Charring Cross tube station.

Also read: Our next visit was to the iconic structure of London Bridge aka and the next day we visited the London Eye.
Europe London Tourist Places