Dussehra Navaratri is known as Devi Navaratrulu / Sharad Navaratrulu by the people of Andhra Pradesh. The nine days (actually nights) of Dussehra festival are celebrated in a grand way in Ammavaru temples across the state particularly in Vijayawada Kanakadurga temple. 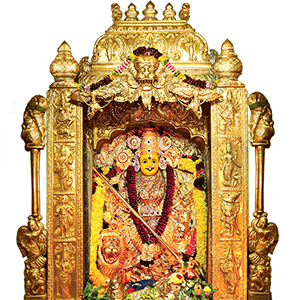 Kanaka Durgamma temple is located on a small hill named Indrakeeladri which is in the old town area. The Peepal tree in 1 Town Police Station and the surrounding area is considered as Durgamma's parent's house. A day prior to Dussehra celebrations in the temple, the area surrounding the peepal tree in the 1 Town Police Station is beautifully decorated. The idol of Durgamma which is under the peepal tree is carried to Kanaka Durgamma temple by the Police officials. The 1 town police officials then offer turmeric powder (pasupu), vermilion (kumkuma), silk sari (pattu cheera) and other items to Kanaka Durgamma.

Also read: Devi Navaratri Utsavalu begin after Durgamma is draped with the sari offered by Her parent's house i.e the police officials. This has become customary since long. Police officials take active part in Devi Navaratri celebrations. According to legends, during the rule of Kondaveeti Reddy Kings, Durgamma appeared in the dream of a soldier named Mangayya and directed him to dig Her out. As per Ammavari directions, the idol of Durgamma was dug out and placed under the peepal tree. From then onwards, it has become customary for the police officials to take active part in the Devi Navaratri Utsavalu.

On each of the 9 days, Durgamma is dressed in different forms known as 'Alankaram' and worshiped in different names. Sharad Navaratri Utsavalu start with the Kalasha Sthapana Pooja. 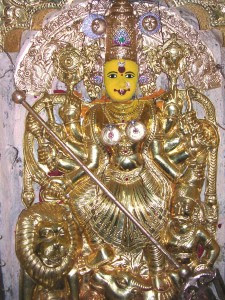 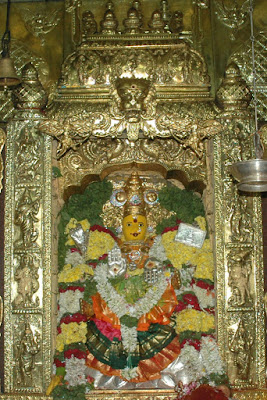 On the 2nd day, Kanaka Durgamma is dressed in light pink sari in Bala Tripura Sundari Devi alankaram. It is believed that one will be blessed with children on worshiping Her. Pulihora is offered to Her as naivedyam. 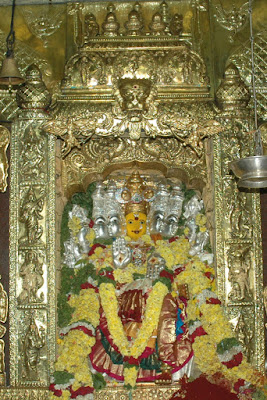 On the 3rd day, Ammavaru is dressed in saffron / orange sari and appears in Vedamata Gayatri Devi alankaram is with 5 faces. Kobbari (coconut) rice and Kobbari payasam are offered as naivedyam to Ammavaru. 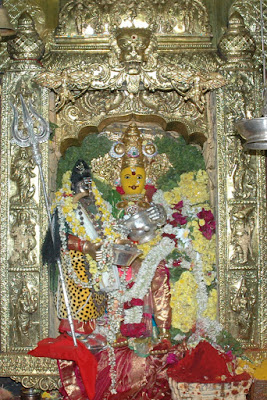 Durgamma is dressed as Annapoorna Devi on the 4th day of Sharad Navaratrulu. In one hand She holds a bowl and in the other a ladle to serve food. Dadhojanam i.e curd rice, Ksheeranam and allam garelu are offered as naivedyam on this day to Durgamma in Annapoorna Devi alankaram. The goddess is dressed in sandalwood color sari on this day. 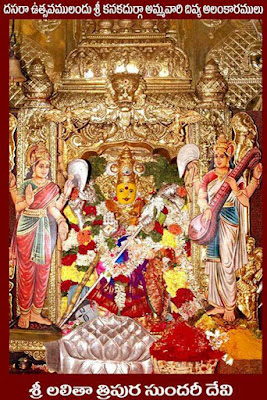 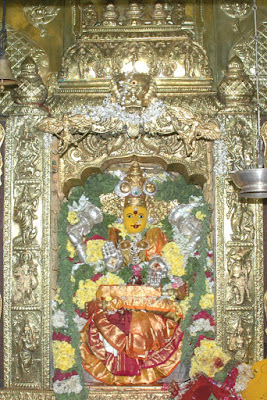 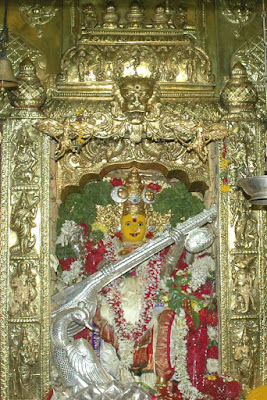 On the 7th day i.e on Suddha Panchami day when it is Moola Nakshatram (star), Durgamma is dressed in pure white sari in the form of Maha Saraswati - the goddess of knowledge and learning. She is seated on Her vehicle swan with Madalasa (the stringed musical instrument Veena) in Her hand. Dadhojanam (curd rice), kesari and paramannam are offered as naivedyam. 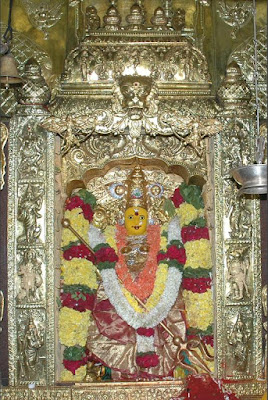 Vijayawada Kanaka Durgamma is beautifully dressed red sari in Durga Devi alankaram on Durgashtami day i.e the 8th day during Dussehra. According to legends, in this form Durga Devi killed an asura named Durgamma. Kadambam and sakaanannam are offered as naivedyam. 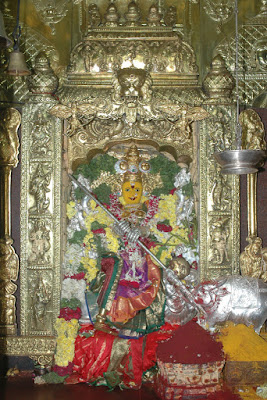 On Maharnavami day, Durgamma is dressed in deep red handloom sari as Mahishasura Mardhini. It is with this form that Goddess Durga beheaded the ferocious buffalo-headed demon named Mahishasura. This is a 'Simha Vahini' alankaram with a trident held in both the hands and other weapons in other arms. The day on which Mahishasura was killed by Durga Devi, is celebrated as Maharnavami. On this day chakkara pongali (sweet pongal) is offered to Durga Devi as naivedyam. 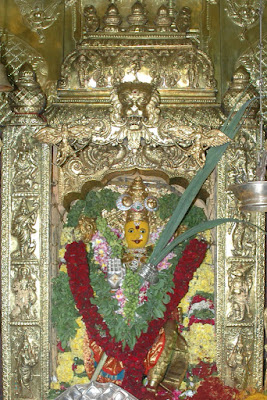