- April 11, 2019
Travel memories are cherished through out your life particularly when you flip the pages of your travel photo album or your travel diary. Just turning the pages of my New York Diary and a stroll down the memory lane.

In June / July 2010, we planned a round about trip from Chicago - Niagara Falls - New York City - Washington D.C - Chicago in Amtrak train. We stayed just for a day or two in each of the destinations and covered the important tourist spots of our interest. Actually two days are not sufficient for sightseeing in New York City, however we could cover most of the important places by going round the city in Grayline's open top double decker hop on hop off bus.

After visiting the world famous Niagara Falls we proceeded to NYC in Amtrak train.

On our return journey from Niagara Falls to Washington D.C, we took two days halt at New York City. We stayed in a budget hotel in Broadway that was booked in advance. The congested room with high raised towers on all sides, was okay for a two-day stay but not up to the mark

On inquiry, we were advised to go on sight-seeing NYC (New York City) in open top double-decker hop-on hop-off bus as it covers most of the important tourist destinations of the city. That sounded good and we thought it was the best way to go around the city in two days at reasonable rate. After going through the brochures of different bus tours, we decided to go for the Grayline open top double-decker bus. It covers almost all the top tourist destinations of NYC.

They operate 4 different loops i.e routes that covers a major part of NYC. As we stayed in Broadway, we took 2-day tour pass. The ticket includes hop-on hop-off access in Downtown region and Uptown. There was a sales counter in the lobby of the hotel where we stayed. For a foreign tourist who visits NYC on a short stay and want to go for sight-seeing, open top double-decker hop-on hop-off bus is the best option. 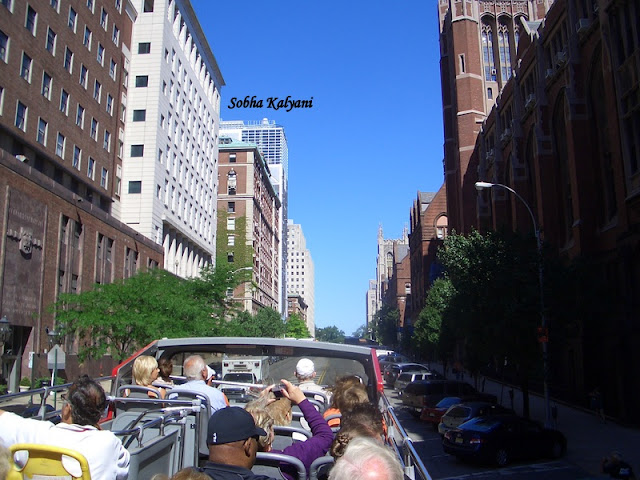 New York City is one of the dream destinations of many foreign tourists. The city is full of attractions and entertainment for tourists and locals too. NYC is one of the most busiest metros in the world and people of NYC are known to walk four times faster than the people of any other city. I personally feel that, at least a week days stay is necessary to go around the important / popular attractions of the city. In fact, NYC is one of the most lovable cities of the U.S.

After purchasing the 48 hours city tour bus pass, we took the subway to Manhattan to stroll around for a while in the busy Times Square.

Walking around the streets of Times Square

Well, the most famous Times Square of New York City needs no description. It is in the heart of the Midtown of NYC which keeps glitters / glowing with neon lights, giant billboards, Broadway theaters and lots more for enjoyment and entertainment. The glittering nightlife in this place is beyond description. There are Pedestrian-Only Zones furnished with chairs where you can sit and watch with awe, the busy busy life of the New-Yorkers. This is one of the most popular tourist destinations where there is much to see and enjoy like Madam Tussaud's Wax Museum, Ripley's Believe it or not, Empire State Building, I Max, famous Macy shop and lots more. 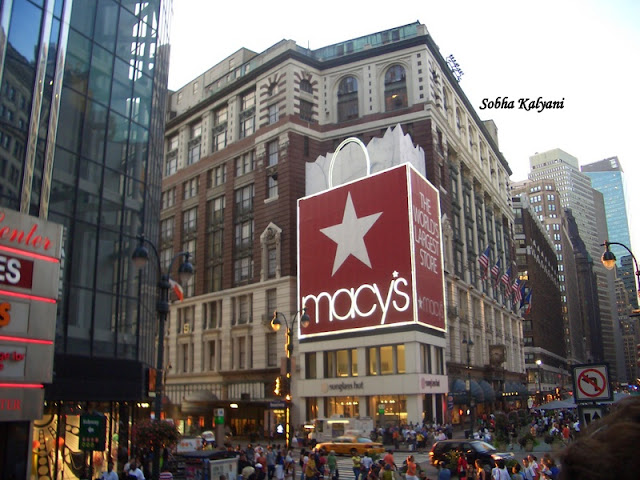 We strolled around the streets of Times Square, did some shopping and as always bought some souvenirs in one of the gift shops. We could see many sales personnel of GrayLine bus tour at specific places selling out city tour pass and helping to those who already bought one.

While going around the streets of Times Square, I clicked this below pic which reminded me of the famous Bollywood movie Kal Ho Na Ho. 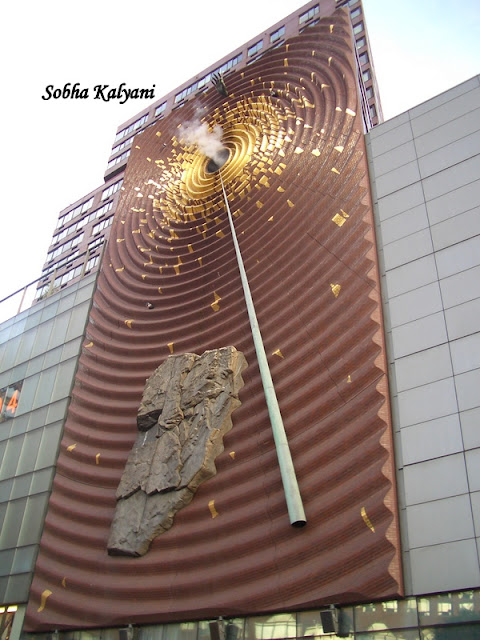 We approached one such person and inquired about the departure of the bus. We walked all the way to 48th St where from the bus departs. The open top double-decker buses were moving too frequently and we felt is very convenient as we need not wait for long for the next bus to hop-on. We boarded the bus and seated comfortably. The tour guide greeted the tourists and started explaining in detail about NYC as the bus moved on. 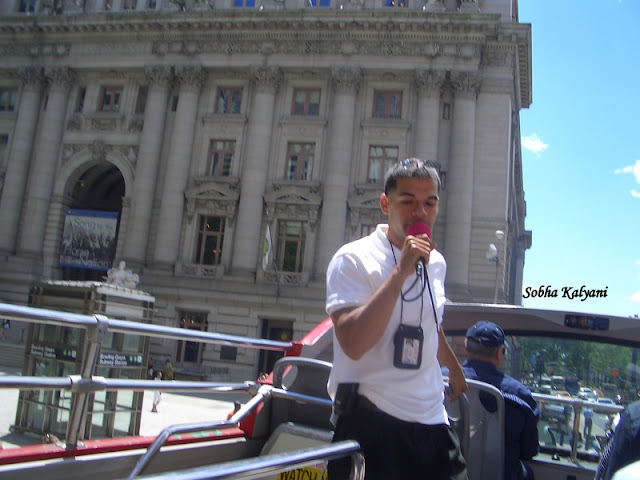 I was a bit excited and looked with awe at the skyscrapers as the bus moved across the streets of New York City. It's a completely different world. It was told by the guide that the people of NYC walk 4 times faster than the people of other cities in the U.S. It was a wonderful sunny day in July and the city was too busy with full of tourists.

As we approached Staten Island, we hopped-off and went on an exciting cruise on River Hudson.

This is the National Monument and is the icon of the U.S / New York City. The statue stands in the Liberty Island. There are ferry transports to reach the island. Visitors / tourists in the boat get too excited. 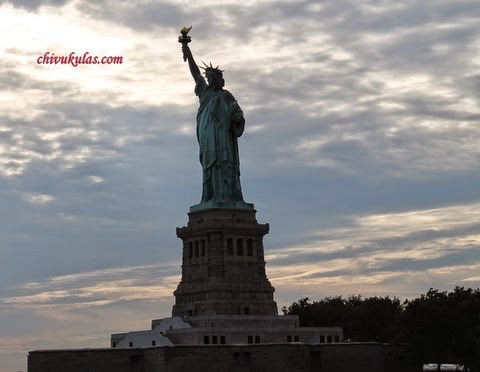 and scream 'awe' as the boat approaches Statue of Liberty. The boat halts for a while here so that visitors can take close-up snaps. After experiencing the cruise we walked to the specified bus bay to hop-on the Grayline bus. Without long wait, we could immediately hop-on in one of the grayline buses.

It was almost evening and our open top double decker bus approached Brooklyn Bridge. Tourists took several clicks of the famous bridge and looked at it with awe. 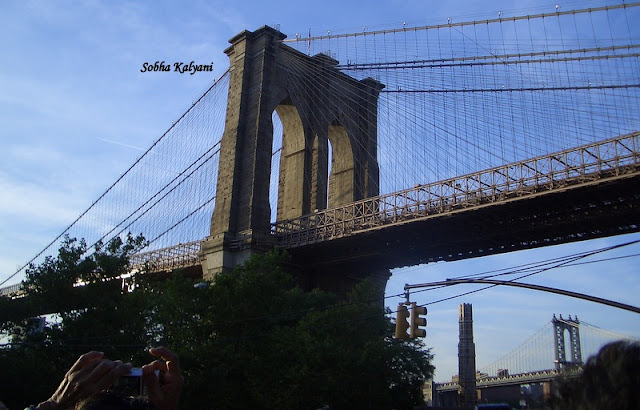 After moving around for a while on the open top double decker bus, we hopped off at Times Square and too the subway to our hotel.

As we took the 48 hours city tour pass, the next day morning we hopped on the double decker bus and after going round the city for a while, we hopped off at the stop close to United Nations Organisation (UNO) Headquarters and had a wonderful experience of the guided tour in UNO headquarters.

Two days is too short for sight-seeing in NYC as there is lot more to see / visit in the city. Going round the city in hop-on hon-off bus is one of the best options for those who can't afford much time for staying in NYC yet want to see the famous sight-seeing places.
City Walk New York City Tourist Places U.S.A