- March 09, 2019
In April 2008 we (two families) planned a visit to Sri Raja Rajeshwara Swamy temple in Vemulavada. During our visit, more than a decade back, it was in the Karimnagar district of the then Andhra Pradesh.

We started early in the morning from Hyderabad in our vehicle. As it was the month of April, it was too hot. It was around 3.30 hours drive from Hyderabad. We took the Sircilla-Siddipet Road to Karimnagar to reach Vemulavada.
>!--more-->

Earlier Vemulavada was a part of Karimnagar District and presently it is in the newly formed district of Rajanna Sircilla. It is a small town and is an important Hindu pilgrim place. Vemulavada is at a distance of 36 Km from Karimnagar. The famous temple of Sri Raja Rajeshwara Swamy (a form of Lord Shiva) is located in Vemulavada. It remained the capital of Chalukyas between 7th and 10th centuries CE (Current Era). In the rock cut inscriptions found here, this place was referred as 'Lemulavatika' which later on took a colloquial transformation and became Vemulavada.

On reaching Vemulavada at around 10.30 a.m, we straightaway proceeded to the temple of Sri Raja Rajeshwara Swamy which was heavily crowded with devotees. 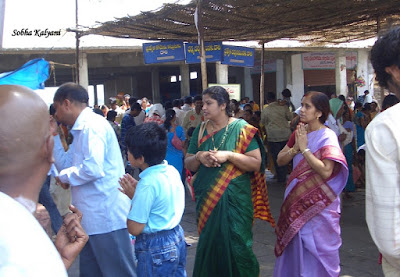 We took 'pradakshina' of the temple i.e going round the temple thrice and then had the darshan of Lord Shiva.

Sri Raja Rajeshwara Swamy is popularly known as Rajanna by the local people. The temple is situated on the banks of a stream named Mulavagu. The temple was built in 11th-12th century CE by one of the governors of the Chalukya Kings. 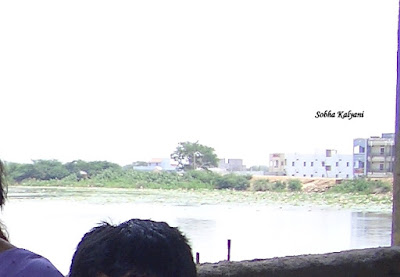 Inside the temple there is a temple tank called 'Dharma Gudam' where most of the devotees have a holy dip before having the darshan of Lord Shiva. Devotees believe that the tank water is rich in medicinal values. According to 'sthala purana' it is said that the temple was built by Raja Narendra, grandson of King Parikshit and descendant of Arjuna. The king who happened to accidentally kill a 'muniputra' (son of a sage) was cursed of leprosy. On taking a holy bath in the temple tank (pushkarini) the king got rid of the curse. He got the vision of Sri Rajarajeshwara Swamy and Rajarajeswari Devi who directed him to take out the Lingam which was lying deep inside the tank and install it in a temple and thus the was built.

Devotees make a special offering in this temple. During our visit to the temple, I was surprised to see devotees holding the rope tied to a bull's neck and making 'pradakshina' round the temple premises.

On inquiring about this unique way of worshipping / offering prayer which is known as 'Kode Mokkubadi', (The Telugu word 'kode' means bull and 'mokkubadi' means fulfilling vow) I came to know that devotees initially make a 'pradakshina' round the temple in their first visit to the temple and  then make a wish. / vow. When their wish is fulfilled, the couple / devotees again visit the temple for 'Kode Mokkubadi' and perform this act of 'pradakshina' along with the 'kode' (bull) round the temple. Mostly devotees perform 'kode mokkubadi' for begetting children and also for the welfare of the family. This is a unique way of worshiping which is not seen in any other temple in India.

pilgrim who take vow (mokku in Telugu) visit the temple along with their bull (known as kode in Telugu) to fulfill their promise and offer their prayers.

Inside the temple premises there are small shrines of Anantha Padmanabha Swamy who is the 'Kshetra Palaka', Bheemeswara Swamy, Seeta Ramachandra Swamy, Kasi Vishweswara and also a dargah (tomb of a Muslim saint). The Vaishnavite shrines inside the premises of Shiva temple and a Muslim dargah signifies the then religious tolerance and communal harmony.

Well after spending some time in the divinely atmosphere, we returned to Hyderabad and it was around 7 p.m by the time we reached our home.

It was a nice memorable day with divinely experience of visiting an ancient temple and learning about the unique way of worshiping Sri Raja Rajeshwara Swamy by going round the temple along with the bull.
Divine Destinations Telangana