Mumbai Trip - Memories Of A Day Spent In Mumbai

- March 06, 2019
In March 2008, we (self and husband) had been to Mumbai to attend a family function which was a house-warming ceremony / grihapravesh in Goregaon East in Mumbai. It was my first time visit to Mumbai - one of the four metros of India and the seat of Bollywood (Hindi movies). However, my husband was in this place for some time and worked in one of the top IT companies.

As we arrived the city two day before the function, we planned a day out in this metro. We took a ca from Goregaon East and visited the famous Mahalakshmi temple located in Bhulabhai Desai Rd to offer our morning prayers to the Goddess. 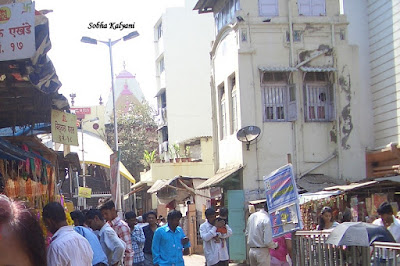 We had to walk through narrow crowded street with shops on either side to reach the temple. We somehow managed to have the darshan of the goddess and then spent some time in the temple watching the waves of Arabian Sea splashing the rocks.

This is one of the famous temples in Mumbai. The temple was built in 1831 and is located at the north of Malabar Hills. On entering inside the temple premises there are two small shrines of Ganesha and Vithal on either side of the 'garbha griha' i.e. sanctorum. On entering inside the 'garbha griha' we can see the idols of Tridevi i.e Sri Mahalakshmi - the main deity of the temple who is seen seated on a lotus, Mahakali and Maha Saraswati who are seen seated on either side of Mahalaksmi. The throne on which the deities of Tridevi are seated is beautifully carved with sheets of silver. Goddess Annapoorna - the Hindu goddess of food - is seen seated on a 'simhasan' atop. The temple consists of the images of three goddesses together in the form of Tridevi.

After recharging ourselves with the divine vibes we had 'vada pav' - the famous food item of Mumbai. Somehow, I personally didn't like the taste of this famous Mumai dish. We then proceeded to Mumbai's iconic structure - The Gateway of India. 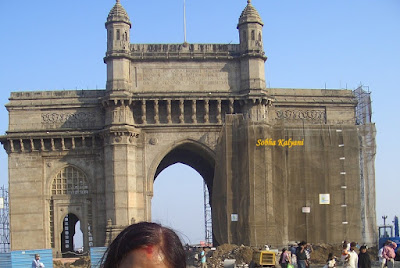 The place was heavily crowded with tourists. I was a bit surprised as cleanliness was not to be seen anywhere at this famous tourist attraction. Both locals and outside tourists were least bothered about cleanliness of the place which was a bit disappointing. Hope there is cleanliness presently as my visit to this place was in 2008. Here is a briefing on the Gate Way of India.

About Gateway of India

The iconic structure of Mumbai is located at the tip of Apollo Bundar in the Colaba district, overlooking the Mumbai harbour with Arabian Sea on its border. The monument was built in 1924 during the British Raj in India to commemorate the landing of King George V and Queen Mary in India in 1911.

The arch-shaped structure is made of basalt which is 26 m (85 feet) in height. During the British Rule in India, Gateway of India was used as an entrance for the British Viceroys and the new Governors of Bombay, to India. As it allow the entry to India, it was named as Gateway to India.

Now getting back to our visit to this iconic structure, we took tickets for a cruise which was of 30-minute duration in the Arabian Sea. That was my first cruise experience, so had an enjoyable time watching ships sailing in the sea. 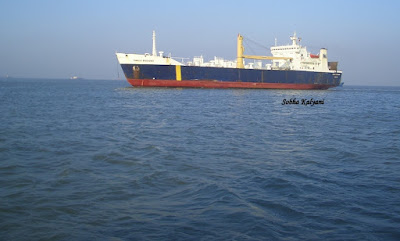 And the beautiful view of Mumbai shoreline from the cruise. I took few quick snaps of the famous Taj Mahal Palace (Hotel) of Mumbai. 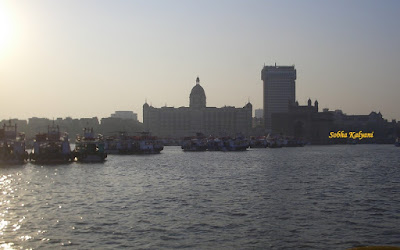 And as we neared the Gateway of India, I took clicks of the view of this iconic structure as seen from the sea. 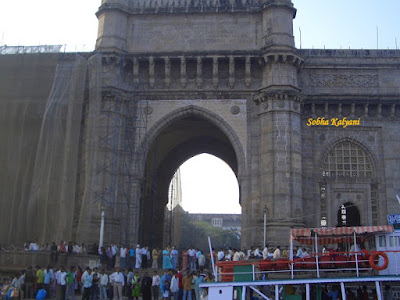 And I could see the tourists waiting in lines to board the cruise. After disembarking we refreshed ourselves with a hot cup of tea and snacks and then went to the famous Marine Drive of Mumbai where we spent time relaxing and watching the Arabian Sea waters dashing the dikes. At this place I took few clicks of the Oberoi Hotel. 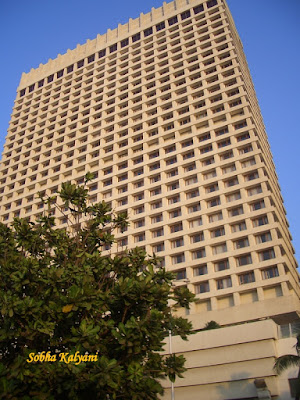 It is a C-shaped 6-lane road along the coast in South Mumbai. The 3.6 Km long road links Nariman Point to Babulnath and Malabar Hill. During night time the drive is illuminated with street lights and looks like a string of pearls necklace, hence it is also known as Queen's Necklace. At the northern end of the drive is the Chowpatty Beach.

During our visit to Marine Drive, I could see many Victorian type coaches carrying the tourists. Anyway, from this place we took cab to the famous Juhu Beach to spend the evening and watch the sunset in the sea. 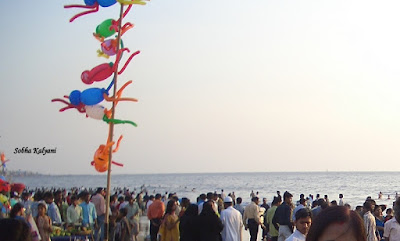 As it was evening time, the beach was heavily crowded with tourists and also with local vendors. At this famous beach also cleanliness was at bay. There were local vendors who were applying instant 'mehendi' designs. 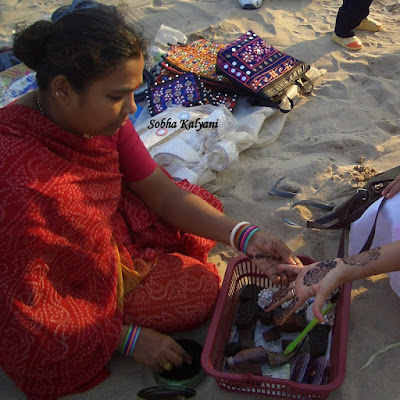 We relaxed in the beach and then strolled for a while to kill time as we waiting for sunset. And finally it was time for sunset and finally I could capture few pics of the beautiful sight.

This is one of the famous beaches in Mumbai which is surrounded by Arabian Sea in the west and Santa Cruz and Vile Parle in the east. The beach stretches for 6 Km up to Versova. 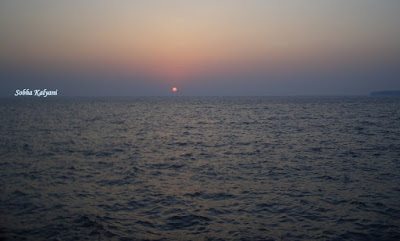 It was already night and we were literally moving the whole day from one place to the other. We were damn time after spending a day in Mumbai. We returned to our destination and had a sound sleep. The next day we attended the house-warming ceremony and in the evening took the return flight to Hyderabad.

Though it was a hectic day at Mumbai, yet the memories are unforgettable.
Mumbai Tourist Places