About Mamallapuram - The Shore Town

Mahabalipuram presently known Mamallapuram is a small coastal town in Tamil Nadu. It is around 60 Km from the capital city of Chennai. As per legends the town derived its name from King Mahabali and the word 'puram' is the word used for dwelling in all the four South Indian languages. According to other thoughts, the town might have got its name from the Pallava King Narasimha Varman I who was a great wrestler. The Telugu word 'Malla' (Malla Yudham) means wrestling and hence the name . This is a popular weekend getaway for the people of Chennai and for the other nearby locals. Mamallapuram is an archaeologist's delight as it is a treasure-trove of heritage sites and is an ancient port city from the times of Ptolemy. In the ancient times trade was carried through sea route with South Asian countries and also with Romans.

The place was referred as 'The Land of Seven Pagodas' by the ancient mariners. The stone carvings of the Heritage Sites speak volumes about the history and culture of South India. It was a prominent centre for art and literature during the period from 3rd century to 7th century CE (Current Era). It was also a bustling seaport during the 1st century CE and presently it is popular for heritage tourism and heritage walks

The shore town of Mamallapuram was built by Pallava King Narasimhavarman I and is rich in stone carvings on uncut rocks, rock-cut sculptures and chariot temples. The town experiences a tropical climate and remains hot and humid through out the year. It is good to start early in the morning for heritage walks. Tourists feel drained off and dehydrated with long walks in the hot sun.

On Day 1 of our Tamil Nadu tour we visited:
1. Kapaaleshwar temple in Mylapore, Chennai
2. Parthasarathy in Triplicane, Chennai
Our Day 3 trip planner of our Tamil Nadu tour included a heritage walk through Mahabalipuram. After a heavy breakfast we started early in the morning from Chennai and reached the ancient historical town by around 9.30 a.m. Our heritage walk started from Shore Temple. 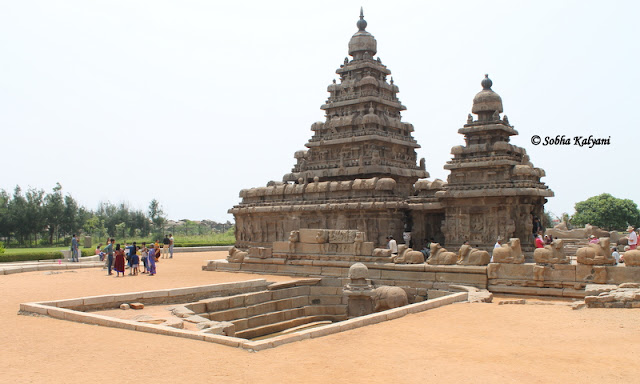 After purchasing entry tickets (Rs.30/- per person for Indians and Rs.500/- per person for foreigners - subject to change) at the counter we walked inside. There is a long walk way with lawn around the temple. From a distance you can spot the Shore Temple with the backdrop of Bay of Bengal sea. 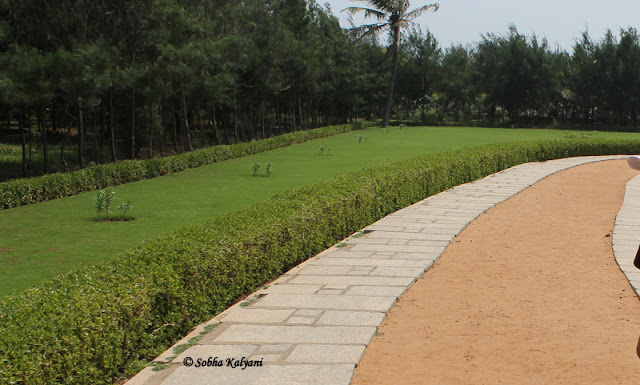 There is a barbed fence round the temple where from you can have a beautiful view of the shoreline, sea and the Mahishasura Rock on the shore. This is a standing boulder on the surf-line of the sea which is shaped into a small temple of Goddess Durga. A small cell was cut into the rock facing the sea and the inner wall of the cell has the carving of 8 armed Durga Devi. This is believed to be a 7th century CE structure during the reign of Narasimha Varman I.

In spite of the greenery all around, the weather is not supportive and it is terrible hot and sultry in the daytime.

Shore Temple is a non-working temple and is just a heritage site. It is one of the Group of Monuments of Mahabalipuram and is one of the oldest structural stone temples of South India. The temple dates back to the 8th century CE and is built of blocks of granite stone. During 2004 tsunami, an old collapsed temple entirely made of granite blocks was exposed at this place which is considered as a part of the Seven Pagodas besides the present Shore temple which is only surviving Pagoda of the Seven Pagodas.

After spending some time walking all around the temple and enjoying the sea view, we walked up the steep rocky stairs and entered inside the small 'grabha griha' (sanctorum). The inner wall of this place has carving of Shiva and Parvati in sitting posture. 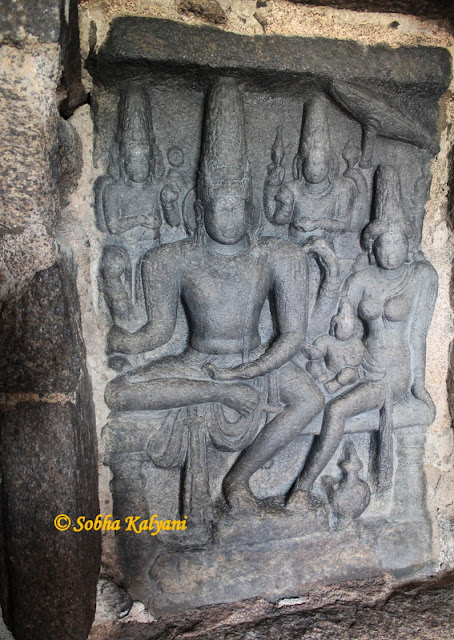 There is a narrow entrance to the temple through which only one person can enter at a time and the others have to wait outside till the one who entered comes out.

After spending some time here we walked out and had refreshing buttermilk from a local vendor. There is a narrow sandy way leading to the beach with a row of shops on the right and Shore Temple to the left. Every year Mahabalipuram Dance Festival is organised by the Dept of Tourism, Tamil Nadu Govt during December / January every year. 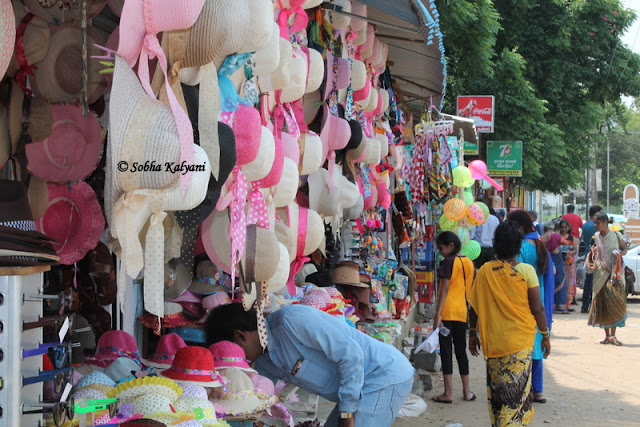 We didn't prefer to go to beach as it was getting hotter so we proceeded Krishna Mandapam. This is a structural mandapa of the medieval period depicting Krishna with Govardhana mountain protecting cowards from the hailstorm raised by infuriated India. 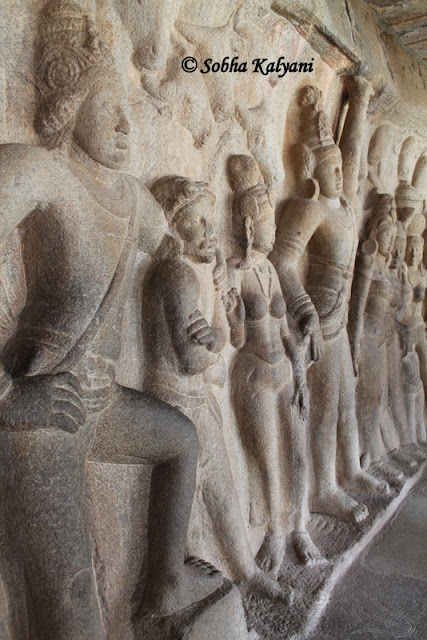 After going through the rock-carvings we walked to Arjuna's Penance aka Descent of Ganges which is just adjacent to Krishna Mandapa. This is one of the oldest monuments in the town. 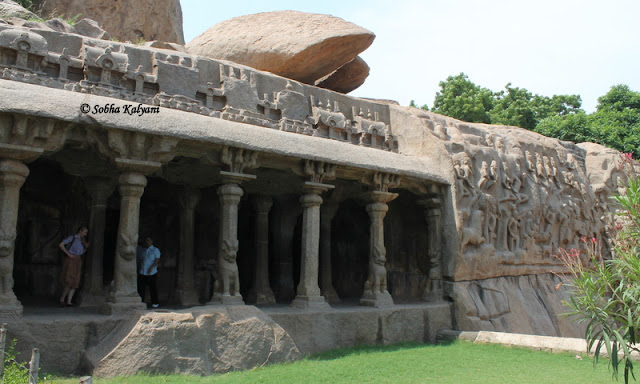 The rock carvings of elephants are very popular and I remember seeing these in some old Telugu movies. 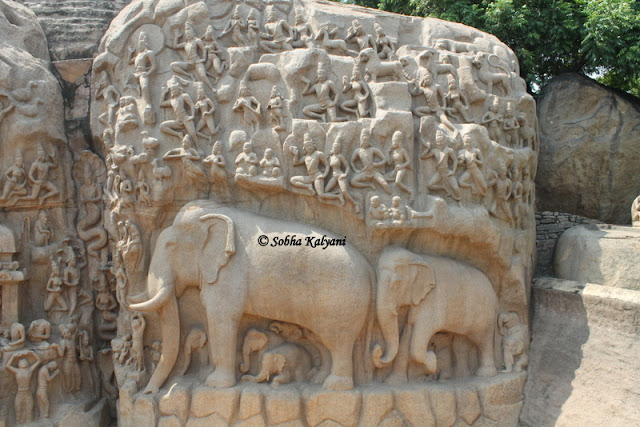 There are many local vendors outside these monuments, selling eatables, local drinks and small gift items. From this place we walked to Krishna's Butterball which is at a walkable distance from Arjuna's Penance. 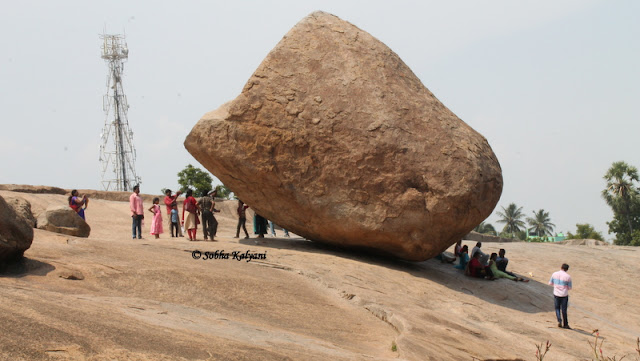 This is a huge rock boulder that rests precariously on a rocky base. This is one of the main attractions of Mamallapuram where tourist take clicks in different poses. We relaxed for a while at this place sitting in a shady place. We felt completely drained off due to long walks in the hot and humid climate. 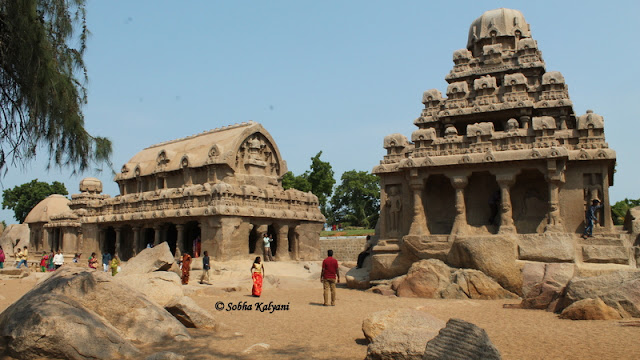 It was already afternoon and was too hot. Somehow we tried to regain energy and spent some time strolling around and exploring the elegant carved rocks. Pancha Rathas literally mean the Five Chariots. These are the monolithic pyramid-shaped temples built in the form of chariots and are named after the five (Pancha) Pandava Princes. I came to know that sunrise and sunset times are the best timings to visit Mamallapuram when one can see the golden glory of the monuments.

That was our heritage walk through Mamallapuram and we were back in our cab. It was a pleasant return trip from Mamallapuram to Chennai via Vandalur with a beautiful view of sea all the way.

On reaching Chennai we proceeded to Marina Beach and spent some time strolling around in the beach. From here we visited the famous Ashtalakshmi temple in Besant Nagar, Chennai.
Heritage Sites Mahabalipuram Tamil Nadu Tourist Places