About Chennai - the capital of Tamil Nadu

The city is located on the coast of Bay of Bengal. It mostly experiences hot and humid weather. There are a good number of tourist attractions and a good number of old as well as new Hindu temples to visit.

In Hindu mythology, it is believed that Goddess Lakshmi has evolved from the depths of the ocean while the gods and demons were churning the milky ocean to extract the divine nectar (amrutam). Hence ocean is considered as the birth place of Lakshmi Devi and God Samudra (ocean) is considered as Her father. And it is also believed that the milky ocean is the residing place of Lord Sri Maha Vishnu's (Lakshmi Devi's spouse) who is conceptualized in a sleeping posture on Adi Seshu - the Divine Serpent that serves as a mattress for the god in the milky ocean.

Hence the founders thought it would be nice to construct Ashtalakshmi temple on the shores of Bay of Bengal. The temple is designed and constructed in the shape of AUM (OM) - the 'Pranava Mantra' i.e the first Vedic Mantra. 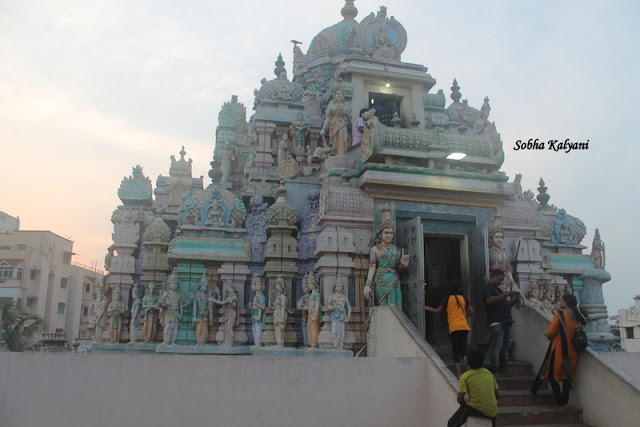 The temple is designed and constructed in a 'Ashtakara' or 'Ashtanga Vimana' style i.e. eight parts. It is a three-tier temple with ground floor, 1st and 2nd floors.

In the main sanctorum at the ground floor Sri Maha Vishnu and Lakshmi Devi can be seen in the standing posture. From here there are steps leading to each of the shrine of Ashtalaksmi that are in the four corners of 1st and 2nd floor. As the devotees climb the steps, they have the darshan of Gaja Lakshmi, Santana Lakshmi, Vijaya Lakshmi and Vidya Lakshmi. And then as they climb on, they see Adi Lakshmi, Dhanya Lakshmi and Dhairya Lakshmi. In the temple below the 'shikharam' is the shrine of 'Dhana Lakshmi'. In the above picture you can see the exit of Dhana Lakshmi shrine.

At this place there is lot of open space where from devotees can have a panoramic view of the sea. Devotees spend some time at this place enjoying the sea-view. 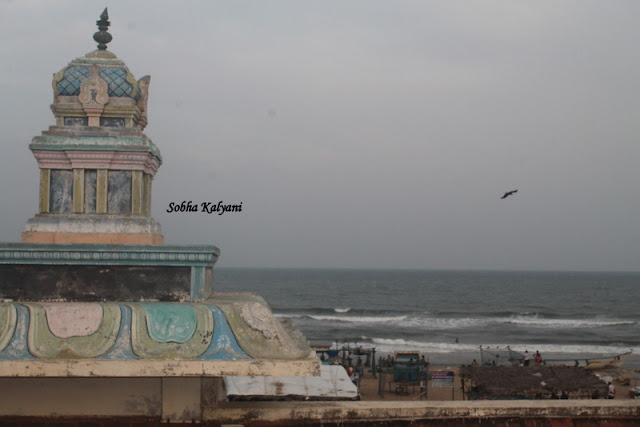 Poojas like kumkumarchana, sahasranamarchana etc are held at the main sanctorum in the ground floor only to the main deities of Sri Maha Vishnu and Maha Lakshmi Devi. Poojas are not held at each shrine of Ashta Lakshmi except at Dhana Lakshmi shrine.However, after pooja in the ground floor devotees need to carry the basket of flowers and place the flowers at each of the shrine. And finally hand the basket of flowers at Dhairya Lakshmi shrine.

There is also one temple shop at the entrance where devotees can buy a variety of spiritual items.

It's a nice place to visit for the god-loving people. Unlike other famous temples, this temple is not heavily crowded with devotees. A nice place for a spiritual elevation of mind. During our recent trip to Tamil Nadu in October 2018, we visited this unique temple.
Chennai Divine Destinations Tamil Nadu Tour