- December 29, 2018
In October 2006 we went on an excursion to Kathmandu. It was a road trip from Raxaul to Kathamandu and we reached Kathmandu in the evening. In the morning on Day 1 we visited the famous Pashupatinath temple where we spent sometime in the divinely atmosphere and then proceeded to Budhanilakantha Temple which is yet another important Hindu temple in Kathmandu.

Kathmandu is the capital city of Nepal. It is at an altitude of 4,600 feet above sea level. The city lies in the Kathmandu Valley of central Nepal in the Himalayan hill region. The city experiences a subtropical climate with warm days and cool nights.

A majority of the people in Kathmandu follow Hinduism. The local people speak Hindi fluently. Buddhism is also followed by the people of Nepal.

It's a unique Hindu temple. Unlike most of the Hindu temples, this is an open air temple without a 'garbha alaya' and 'gopuram' i.e cover on the main idol of the temple. 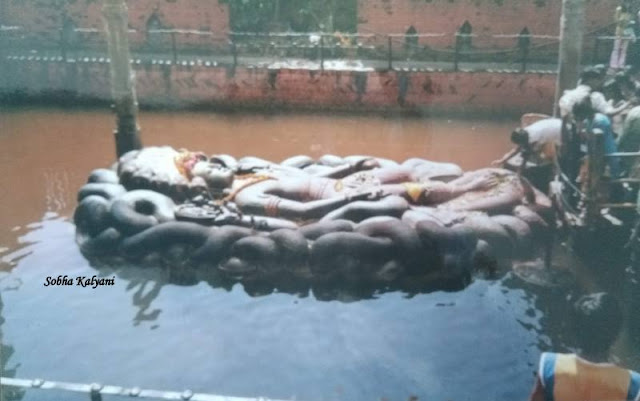 The temple is located at the foot of Shivapuri Hill and is at a distance of 9 Km from the main city of Kathmandu. During my visit to Kathmandu in 2006, I visited this temple. On entering inside, I was awestruck and was dragged into the bygone centuries. I was awed on seeing the magnificent life-size stone carved structure of Lord Vishnu in a sleeping / reclining posture on the coiled Divine Serpent 'Adi Seshu' with the hoods beneath His head.

The idol is 17 feet long lying in the water tank was carved during the 7th-8th century during the Lichchavi's rule. It is carved out of a single black basalt stone. The idol of Vishnu is in 'chaturbhuja' i.e with four arms and with 'sankha' (Celestial conch), 'chakra' (Celestial disc), 'gada' (mace) and 'padma' (lotus) in each of the four hands.

I did not know anything about the temple before entering inside. Seeing the name 'Nilakantha' which means 'blue throat' which is one of the names of Lord Shiva, I thought it to be a Shiva temple. But after seeing the gigantic idol of Lord Vishnu, I was a bit puzzled and wondered how Lord Vishnu is known by the name 'Neelakantha' in this centuries old temple. And was also wondering what does this 'buddha' mean in the local language.

On inquiring with some local visitors, I came to know that Vishnu is known as Neelakantha in this temple and 'buda' in the local language means 'immersed'. As the huge idol of Lord Vishnu is immersed (though not fully immersed) in the tank waters, it came to be known as 'Budanilakantha'. Actually the Hindi word 'duba' mean immersed, but in Nepali language this word got reversed to 'buda'. Somehow, I was not convinced with what the locals told me.

On further inquiry with the local visitors, I came to know that the statue of Lord Vishnu got the name 'Neelakantha' (actually one of the names of Lord Shiva) after an old farmer named Neelakantha who happened to rediscover this statue. Hence the idol / temple got the name 'Buda Nilakantha' after the name of the old farmer who happened to find the statue of Lord Vishnu in his field while ploughing. That was a convincing answer.

After admiring the ancient stone carved structure for a while, we walked down the steps to touch the feet of Lord Vishnu where there is a small iron barricade. We offered flowers at the feet of Lord Vishnu, prostrated before Him and then took few clicks at different spots. As it was afternoon by that time, we walked around the temple for while to peep into the bygone centuries. 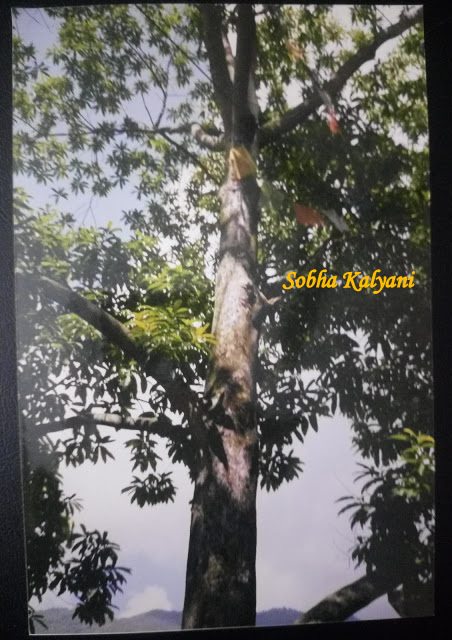 There are many trees all around and we were attracted on seeing one tree. Many 'panchamukhi rudrakshas' were found scattered on the ground under the tree. That is the 'Rudraksha' tree and I happened to see a 'rudrakasha' tree for the first time in my life. On keenly observing the tree, we saw few 'Rudrakashas' hanging on the tree. We were so excited that we picked few, of course, after offering few bucks to care-taker of the tree.

The above picture of 'rudraksha' tree was taken by me with an old cam (not digital). After spending much time in this ancient temple, admiring the statues and surroundings, we walked all the way to the Hotel where we stayed.

The narrow crowded streets with local vendors on either sides reminded me of streets in Indian cities / towns. I made some local shopping on the way and relished local food at the local roadside vendor without much caring for hygiene. One interesting thing to mention is that the local vendors and the shops in Kathmandu accept Indian rupees. Before you make them a payment, they ask whether you pay in IR or NR i.e Indian Rupees or Nepali Rupees. This was sometime back, don't know whether they accept IR these days or not.

It was a wonderful divinely experience visiting Budhanilakantha temple in Kathmandu. This is one of the must-visit Hindu temples in Kathmandu.

After visiting the famous Hindu temples in Kathmandu on Day 1 of our trip, we returned to our hotel rooms. On Day 2 our visit was to the popular tourist places of Swayambhunath, Boudhanath, Durbar Square and some shopping on the way.
Divine Destinations Kathmandu Nepal Tourist Places