The story of Ravana and Atmalinga of Lord Shiva

- December 14, 2018
In the ancient Hindu scriptures, the story of King Ravana bringing Atmalinga of Lord Shiva from Mount Kailash dates back to the Treta Yuga.

King Ravana ruled over the kingdom of Lanka in the Treta Yuga. He was the son of a Brahmin Sage Vishrawas and demon princess Kaikasi who was a great devotee of Lord Shiva. Lanka is an island in the Indian Ocean and is to the south-east of India (Bhaarat). He became all-powerful and the master of the three worlds after he got the boon from Lord Brahma - the Hindu god of Creator.

Now coming to the main story of Ravana and the 'atmalingam' - Each day Ravana's mother used to make a Saikata Linga (linga made of sand) on the sea shore and worship it. And each day the saikata lingam was getting washed away in the sea waters. Once Kaikasi expressed her wish of having / worshiping 'Atmalingam' of Lord Shiva, to her son Ravana.

Ravana had great regard for his mother, so he immediately left for Mt Kailash to get the 'atmalingam'. Even after taking hard / severe penance (tapas) to please Lord Shiva, He did not appear. Ravana became so furious that he tore open his stomach, took out the nerves from his body and used his nerves as strings for playing Rudra Veena (an Indian classical stringed musical instrument) to appease Lord Shiva.  On witnessing the terrifying act of Lord Ravana, Nandeeshwara (Nandi - the divine Bull and vehicle of Lord Shiva) trembled with fear.

Finally Lord Shiva was much please with the determination and devotion of Ravana and appeared to him. Ravana expressed his wish of getting Shiva's 'atmalinga' (also known as pranalinga) for his mother. Lord Shiva was stunned on listening to this strange wish of Ravana. Lord Shiva had to give away away His life-force to Ravana as He was bound with the power of Ravana's penance.

So Lord Shiva granted him the boon and gave away His life-force i.e the 'Atmalingam' saying, "O Lankeshwara, this is a very special Lingam and the place where this Lingam dwells becomes Kailash. Beware! do not place the Lingam anywhere on your way back to Lanka. By chance it you happen to place this Lingam on the ground, the 'atmalinga' will be fixed fast to the Earth / ground and you cannot take it out any more. And I will get back my life-force."

After giving His 'Atmalingam' to Ravana, Lord Shiva turned pale and became lifeless and still. Ravana was too excited on acquiring  'atmalingam', so he started his return journey / flight to Lanka.

Meanwhile all the gods in the three worlds were much worried about the catastrophe that might befall on account of this. They wanted to stop Ravana from taking the 'atmalingam' but no one could dare to do so.

Then Lord Ganesha came forward and determined to restore 'atmalingam'. Ganesha transforms himself into a young cowherd boy and descends on Earth. He closely follows Ravana and remains himself unnoticed. In view of getting 'atmalingam' Lord Vishnu fast forwards time and creates an illusion of dusk / sun set time with His 'maya'.

Meanwhile Ravana who was flying with tremendous speed towards Lanka was confident that he would reach his kingdom before sunset / night. He got puzzled on seeing the sudden change in time.

Ravana who was very punctual and very particular in performing evening prayers / ablutions, was wondering how to do prayer with the 'atmalingam' in his hands which should not be placed anywhere on the ground as per Lord Shiva's instructions. The place happened to be Gokarna in the west coast of India.

He started looking for a human help with whom he can entrust the 'atmalingam'. He then spotted a young cowherd returning home with the cattle. Little did Ravana know that he was being tricked by the gods. As he was badly in need of help, he called out the young boy for help who was none other than Lord Ganesha himself in disguise. 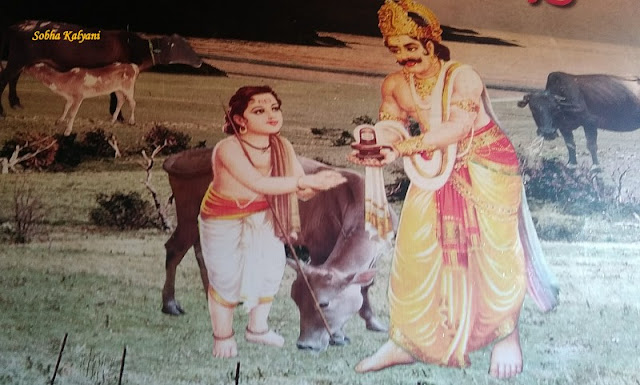 King Ravana had no other option than to agree for his condition. Ravana placed the 'lingam' in Ganesha's hand and ran fast to the Arabian Sea to perform 'sandhya vandanam'. He started doing his prayers as fast as he could but Lord Ganesha who was waiting for the opportune time, already gave 2 calls. Ravana, who quickly completed his prayers started running towards the boy as fast as could and shouting at him to hold the 'lingam' till he reaches.

But as it was a pre-planned act, as Ravana was about to reach the boy, Ganesha placed the 'atmalingam' on the ground and enraged Ravana chased the boy who ran for his life. Ravana, out of anger, hit the boy hard on this head with a rod. However, the boy escaped and disappeared from the scene.

The idol of Ganesha in Shree Mahaganapati temple in Gokarna has a dent on the head. It is believed that the dent was formed when Ravana hit him hard on his head.

As per Hindu scriptures, the place where 'atmalingam' got fixed to Earth, is Gokarnam which on the west coast of Karwar in Karnataka. And later Shree Mahabaleshwar temple was built in the place where the 'atmalingam' got fixed. Hence Gokarna became one of the holiest pilgrimages for Hindus and is known by the name 'Bhoo Kailas' i.e. Kailash on Earth.
Hindu Mythology Stories