Recollection of our short stay in Mysore

- December 31, 2018
On repeated requests from the readers, I am posting a series of my travel memories which include my visits to various locations across the world in the past.

This post is a recollection of our visit to Mysore which was a part of our trip to Ooty in September 2007. We proceed to Mysuru (Mysore) from Ooty by State Road Transport bus for sight-seeing.

Mysore is officially known as Mysuru is located at the foot hills of Chamundi Hills. The city has great historical importance as it remained the capital of the Kingdom of Mysore ruled by the Wadiyar Dynasty for nearly 600 years. Wadiyars had contributed much for the cultural and economic growth of the Kingdom.

The place is well connected by air, rail and bus, with the important cities of Karnataka. Mysore Maharaja Palace, Brindavan Gardens and Chamundeswari temple are some of the popular tourist attractions of the place. Mysore is well noted for Dasara procession, Mysore silk saris, Mysore sandalwood soap / toys / handicrafts and many more.

After refreshing we first proceeded to Chanundeswari temple to offer our prayers. We took the public transit (bus) which was not too crowded. We enjoyed the beautiful view of Mysore city from a height as the bus moved up the Chamundi Hills. We could even see the spectacular view of the magnificent Maharaja Palace from the bus.

There was no heavy crowd in the temple during our visit. We just had the darshan of Chamundeswari and then visited the small shrine of Shiva within the temple premises. After spending some time in the divine atmosphere we took the public transit bus to Maharaja Palace - a stunning structure. It's very spacious inside with shady resting places. We took rest for a while and then went round the palace peeping into the architectural grandeur of the Kings of Wadiyars.

Mysore Maharaja Palace is the most popular tourist attractions of the city and is one of the most visited monuments of India. It is easily reachable from different locations of the city. The palace is located at Sayyaji Rao Road in the heart of the city. This magnificent palace is also known as Amba Vilas Palace. It was designed by the British architect and was constructed in 1912 CE (Current Era) for the 24th King of the Wadiyar's dynasty of the then Mysore state. It is one of the largest palaces in the country. It takes almost 2 hours to walk around in the palace.

The palace remains open for visitors from 10 a.m to 5.30 p.m on all days of the week (subject to change). There is an entry fee of Rs.40/-  for adults, Rs.20/- for children in the age group of 10-18 years and is free for children up to 10 years (subject to change). For foreign nationals entry fee is Rs.200/- which includes a audio kit. Photography is not allowed inside the palace, however visitors can take clicks outside. 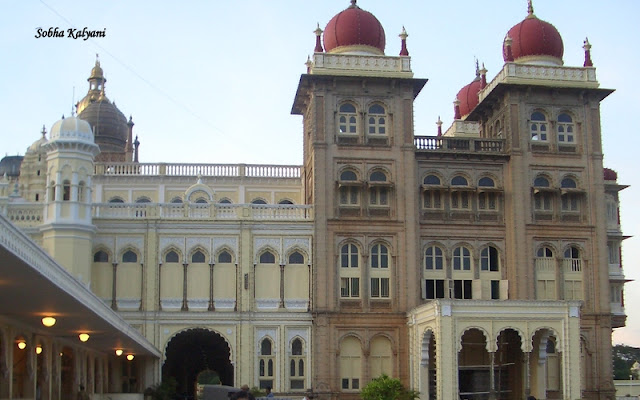 The palace is heavily crowded with visitors in the evening to witness the glowing beauty of the illuminated Palace. There is a light and sound show from 7 p.m to 7.40 p.m (subject to change) on all days of the week except for Sundays and national / state holidays.

We too waited to watch the beautiful illuminated Palace. By the time it was dark many gathered at the place watch the palace with lighting. 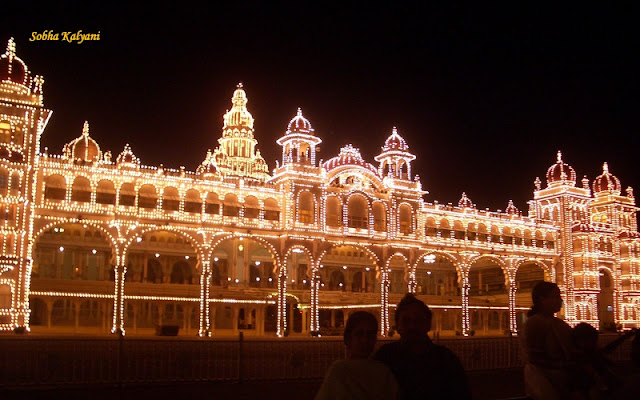 After a long wait, the magnificent palace got illuminated which enhanced the attraction of the palace, followed by the drum beats of the soldiers. We took few clicks of the illuminated Mysore Maharaja Palace and were back returned to our hotel.

The next day morning we visited Brindavan Gardens. I was a bit disappointed with the visit as I couldn't see the blooming beauty in the garden, no fountains, everything looked barren for me. May be it was off season and was not the right time to visit. 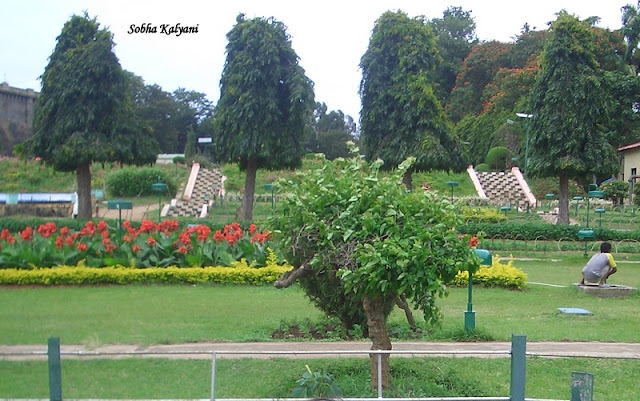 This is one of the top tourist attractions of Mysore where many movie (Telugu, Kannada and Tamil) songs in the past were shot. It lies at a level below the Krishnarajasagara dam across river Kaveri. It was started in 1927 by the Horticulture Dept. The garden opens to public at 6.30 a.m in the morning and closes at 9 p.m (subject to change). There is much to enjoy here like the musical fountain show which starts at around 7 p.m, boat ride beneath the dam and many more. There is an entry fee and it is free for children under 5 years.

The garden is enjoyed the most in the evenings with illuminated fountains but unfortunately we couldn't make it in the evening. And that was our short stay in Mysuru. The next day in the early hours, we returned to Bengaluru, visited the famous ISKCON temple and took our return flight to Hyderabad.