About The Indo-Pak Wagah Border

Wagah is the Indo-Pak road border that lies on the Grand Trunk Road between Amritsar in Punjab, India and Lahore in Punjab, Pakistan. It's Indian name is Attari. It is at a distance of about 25 Km / 30 minutes drive from Amritsar. This is the only road crossing between India and Pakistan. It is an army outpost at the Indo-Pak border to check the intrusion from Pakistan and to prevent Indians from entering Pakistan. Wagah Border is a ceremonial border in the India-Pakistan border line.

Every evening the beating the retreat ceremony takes place before sunset at 4.15 p.m in winters and 5.15 p.m in summers. The unique ceremony includes the closing of the international gates, changing of guards, lowering of flags and marching of the guards on both sides of the border is held with great pomp. The events are witnessed by thousands of cheering spectators on either side of the border. The ceremony is being held since 1959 C.E (Current Era). 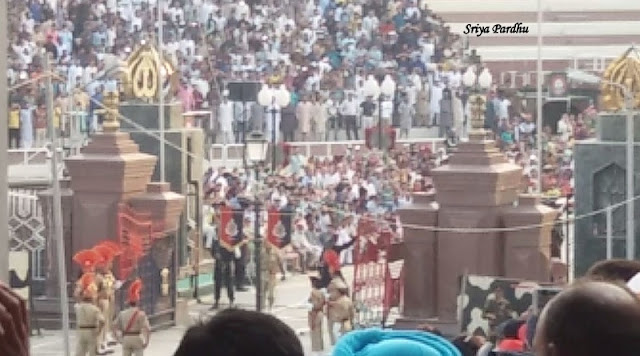 In the ceremony a parade is held by the Border Security Force (B.S.F) of India and Pakistan Rangers soldiers. The flag down / lowering of the National Flags of the two countries is the highlight of the ceremony which is witnessed by thousands of spectators on either side with much patriotic fervor. The ceremony lasts for around 45 minutes.

Officially the ceremony is held to close the international border gates at night and lower the flags. The ceremony symbolizes mutual cooperation and brotherhood between the two neighbor countries.

Our Experience at the Wagah Border

During our North India tour in last summer, we visited the historical site of Jallianwala Bagh and Golden Temple.

Read About: Our visit to Jallianwala Bagh
From here we visited yet another important historic site and a must-see place / event - The Wagah Border ceremony where we had a thrilling experience of standing between the Indo-Pak border.

As it was summer, the weather was too hot in Amritsar and was unbearable. In spite of the scorching heat, I guess it could be around 45 degrees Centigrade, the place was heavily crowded with visitors of all age groups and foreign visitors too. As the weather was terrible in summer, we chose to sit in a shady place instead of sitting on the jam-packed steps which gave the appearance of a cricket stadium. 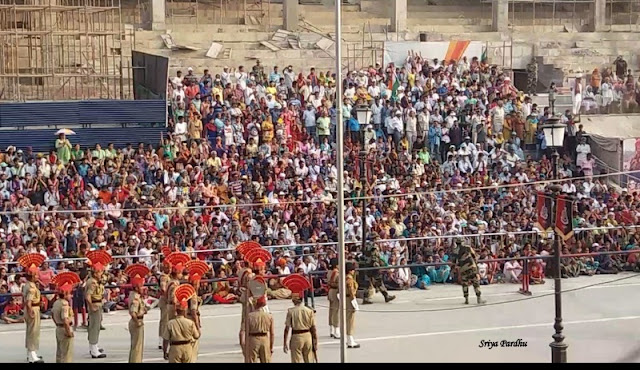 Before the ceremony began, few girls and ladies who were invited, who lined up to carry the flag and run up to a particular spot close to the border gate and back. I am sure, it was a moment of pride for the girls and ladies to wave the Tricolor flags and run with great enthusiasm while Hindi patriotic songs were played as background in high decibels. There was cheer and applause from the crowd.

As this is not a ticketed event, neither there was a systematic entry / exit nor an ordered / systemic seating. However, there is very tight security with separate lines / queues for ladies and gents. The security check up was done before entering into the arena. Everyone was curious to watch the historic event. Everyone stands and shouts with high spirits least bothering about the visibility for the visitors sitting on the back rows. That's the patriotic fervor of the mad crowd who are least concerned about their fellow Indians. At this overcrowding place, you can see the striking attitude of a typical Indian i.e 'I must occupy a better place and I must have a better view'

After the long wait, suddenly there was action with loud shouts of 'Bharat Mata ki Jai' in the mike and mesmerized crowd shouted 'Jai' in high decibels. As it's summer, the ceremony started at around 5.15 p.m. 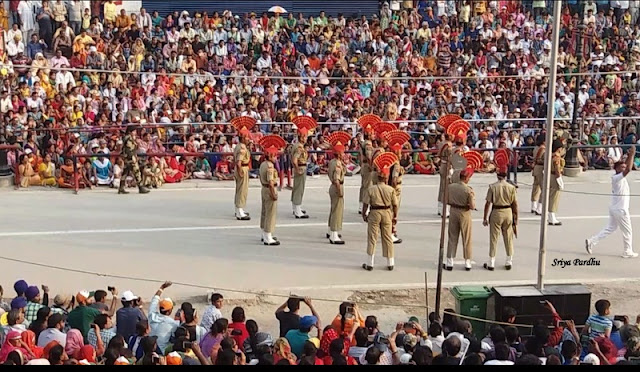 There was a carnival type of atmosphere and high spirits among the crowd. There was similar atmosphere on the other side of the gate where you can see Pakistani people with equal spirit. 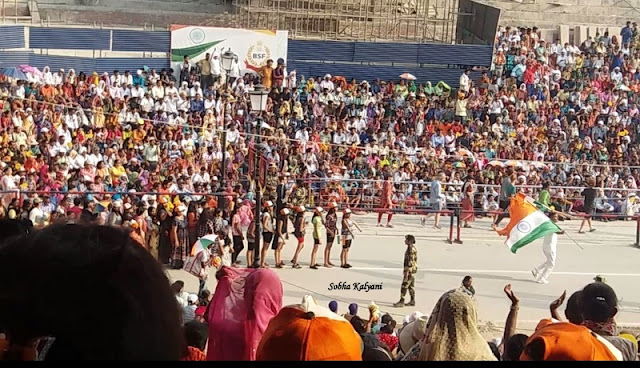 The BSF soldiers (both men and women) are in their typical uniform with unique red head gears that spread out like paper made folded fans (peacock feathers). 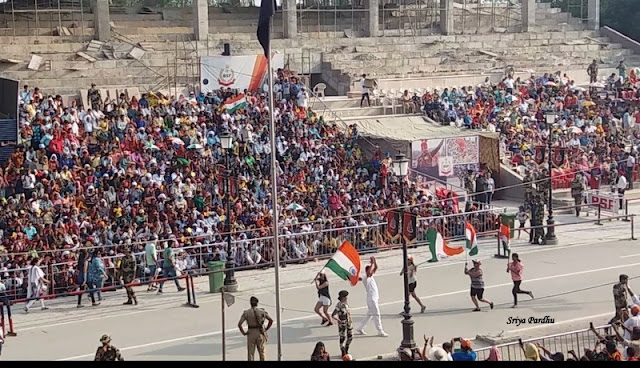 After the festive atmosphere, the ceremony began with a parade by the soldiers on both sides of the border. The BSF soldiers marched in the typical way with kicking legs unusually high. It was a grand parade and there was cheering and high patriotic feeling on both sides of the border gate. When the parade came to an end, two women soldiers marched up to the gate. Though we couldn't view clearly, we came to know that similarly two Rangers from the other side marched up to the gate. As the sunsets, the Indian BSF soldiers and Pakistani Rangers open the gates, with an infantryman standing in attention at both sides of the gate. The soldiers on both sides meet and greet each other. At sunset, the national flags are simultaneously lowered, folded with due respect and were keep inside.

This marks the closure of the ceremony and the crowd disperse carrying with them memorable / patriotic feeling. Many visitors go near the border and take pics of the neighboring country across the border.

We had a wonderful patriotic experience at Wagah Border and I feel that every Indian enjoys the ceremony with patriotic fervor. The most disgusting experience is that a majority of local tourists are a bit indiscipline and unruly. In spite of those drawbacks, the ceremony is worth watching and the place is worth a visit.