As a part of family tour to North India last summer, our 1st destination was New Delhi - the capital of our country.. After a joyous boat ride in the lake at India Gate, we visited one of the museums in Red Fort which is of historical importance. 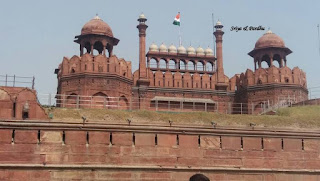 As we had read about Red Fort and Independence Day celebrations at Red Fort in our social text books, patriotic feeling in us awoke and we couldn't stop ourselves from saluting our National Tricolor Flag.

After taking few pics at the historical site of Red Fort, we proceeded to the Indian War Memorial Museum (formerly known as Red Fort Museum), inside the Red Fort. It is located in the Naubat Khana aka Naqqar Khana i.e the Musical House building in the Red Fort.

The museum is accessed from North and South ends of Naubat Khana building and is in the 1st and 2nd floors of the building. The gallery at the entrance has stunning picture of the landmarks of 1st Battle of Panipat (fought between the invading forces of Babur and the Lodi Empire). In this massive picture, you can see Mughal Emperor Babur and his army and Sultan Imbrahim Lodi and his army facing each other and fighting courageously.

Being students, we were thrilled to see the displayed artifacts that include swords, khukris, bows & arrows, shells, machine guns, revolvers, chest armors, axes used in the battles, array of ivory daggers in unique designs and items like gunpowder, bomb fuses, cannon balls and shells, small pistols with bullets and other such ammunition.

Going round the galleries, we peeped into the history and had a glimpse into the war / battle and bloodshed. We were moved with the thought of the pains and hardships that the soldiers might have had during the war period. We silently saluted those courageous martyrs who laid their lives for their motherland.

After spending some time in this gallery, we moved round the other two galleries where there is a showcase of impact of industrialization on ammunition and communication. Here you can see the new gadgets and these didn't attract us. We had a quick look and round in those galleries and moved out.

The museum is known as 'Swatantra Sangram Sangrahalay' in Hindi. The museum opens for visitors at 10 a.m everyday except Friday when it remains closed. It closes by 5 p.m. The entry fee is nominal which is Rs.5/- per person for Indians and Rs.100/- per person for foreign nationals. While it is Re.1/- for Indian students. Rs.25/- is charged for taking video / handy cam and digital cam. (Prices mentioned may subject to change).

The museum depicts the pictures of stage wise freedom struggle of India. You can even see marvelous paintings, documents, lithographs etc in the museum. We had a wonderful experience of peeing into our history by going round the different galleries of the museum. With a whole heart, we pay homage to the brave soldiers.