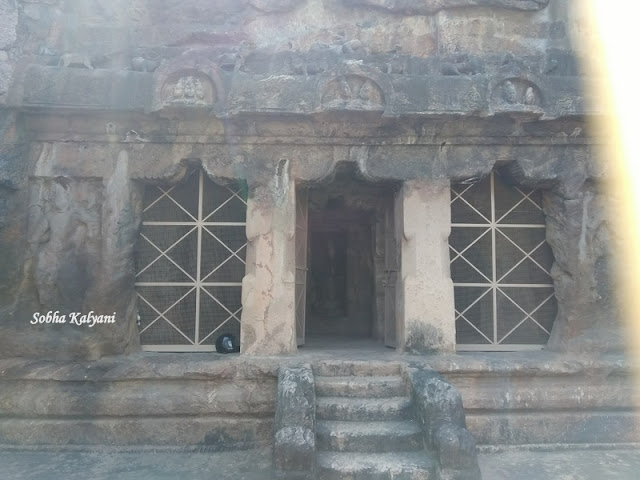 About rock-cut cave temples of India

Barabar caves in the Indian state of Bihar are the oldest surviving rock-cut temples of India. Some of these temples trace back to 3rd century B.C.E during Mauryan Empire with Ashokan inscriptions. The ancient Indian artisans created awesome structures by carving and chiseling the rock surfaces that stand testimony of time.

Most of the rock-cut caves were made for religious purpose like Buddhist monasteries and Jain temples and Hindu temples. There is no dearth for such ancient rock-cut cave temples in India. These are found almost in all regions of the country some of which gained much popularity due to its magnificence which few didn't become popular and are lesser known to tourists. 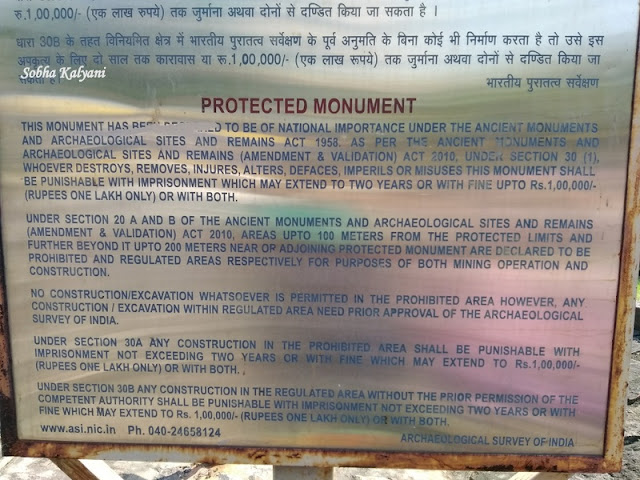 Mogalrajpuram rock-cut cave temple in Vijayawada, Andhra Pradesh is one such lesser known cave temples and is a protected monument by the Govt of India. This cave temple dates back to around 5th century C.E and is almost in a ruined state.

The temple is located on a rocky hill in the middle of busily crowded area of Mogalrajpuram in Vijayawada.There are remains of a couple of broken rock carvings of few Indian gods which is in an unrecognizable state. 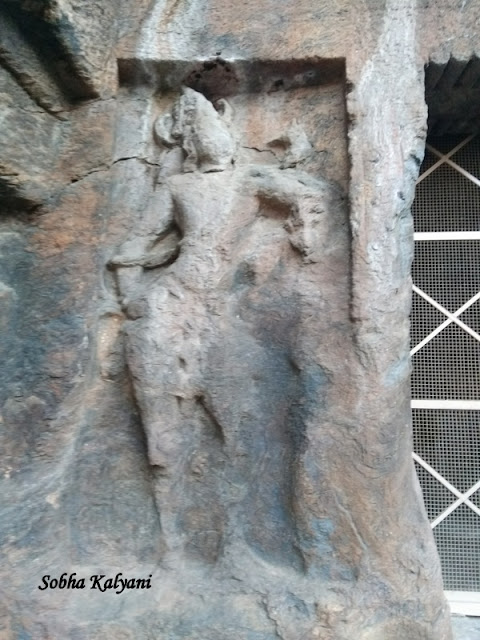 According to archeologists / historians, these caves belong to Vishnukundins of the 6th and 7th century C.E. The 'ardhanarishwara' sculpture in the temple is one of its kind South India. But unfortunately, I couldn't see the sculptor anywhere in the caves.

All around the ancient monument, there is concrete jungle with too many buildings that including residential flats, a couple of schools like Sri Chaitanya in the busy jam packed area and of course shops on the main road. 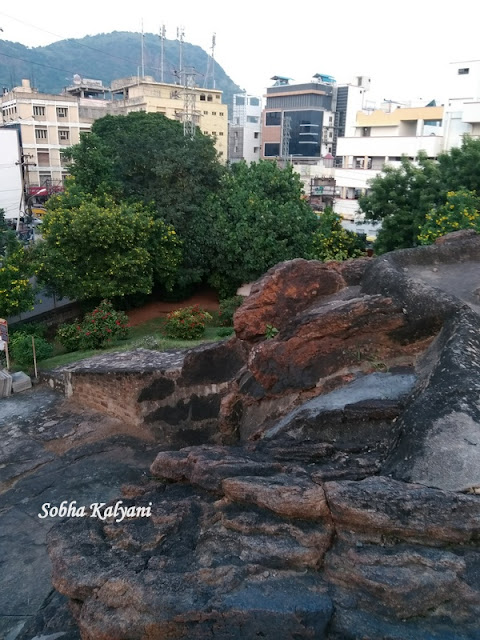 Unfortunately in the ever-busy life of Vijayawada, a majority of the locals either have no idea about the existence of this national monument or don't like to have a peep into our ancient architectural excellence. While others feel low of themselves / or assume that others would think of low of them, if they visit such ancient rock-cut temples. Because of such an attitude of the local people, the maintenance of the monument is so so.

The worst part is that, there is a drainage attached to the compound wall of this ancient rock temple where you see many local people / pedestrians peeing. Local people are least bothered about the up-keeping of one of this unique rock-cut cave temples. But these people take pride in moving around the sophisticated malls and taking selfies.

The monument remains open from 9 a.m to 5 p.m and there is no entry fee. You can happily walk inside to have a peep into the ancient cave architecture of India. As you enter, you can see rocky steps on you right that lead to the hill top 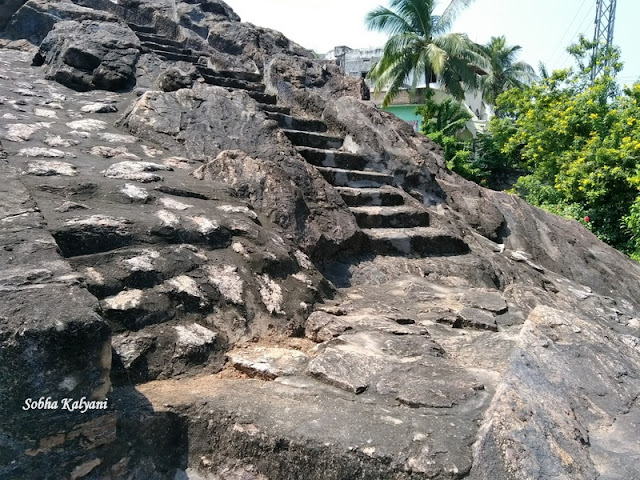 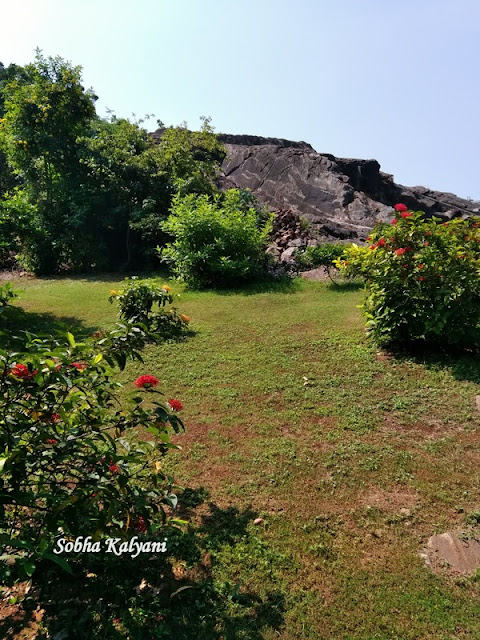 and slightly to the back of the monument, you can see a well maintained beautiful garden inside the premises where visitors can relax for a while and stare at the ancient monument. 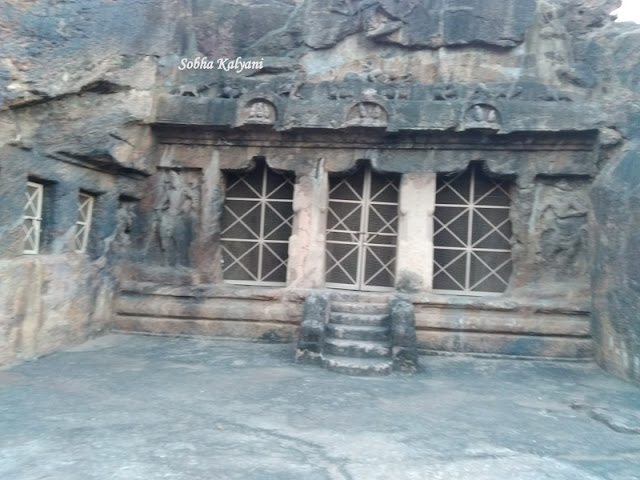 The above pic is the main gate to enter inside the cave temple. On entering inside, you don't find anything except three small rock-cut caves. In the middle cave there is a small ritual hole. 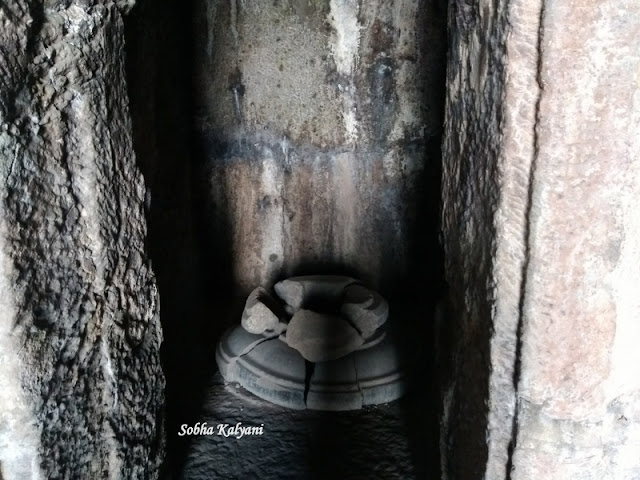 It would be great if govt of Andhra Pradesh peeps into the plight of this ancient unique monument of national importance and takes necessary steps in uplifting the unique rock-cut cave temple which would help in making this wonderful 5th century monument into a tourist attraction.
Andhra Pradesh Tourist Places Vijayawada