U.S. Travel Diaries - Durga Puja celebrations in Columbus - A reflection of Indian culture in the West

In West Bengal, the 8th day i.e Durgaashtami day during Dussehra festival, is celebrated as Durga Puja. The huge clay (or plaster of paris) idol of Goddess Durga is beautifully decorated in a special way which is unique of Bengalis.
It was a high school in Columbus, OH. As it was the month of October, the weather was getting colder.

On entering inside, the invitees / guests were offered prasad (prasad is the food that is offered to god at the time of puja i.e worship and then this is distributed to the devotees). And then they were directed to a closed auditorium where cultural programme was going on like Hindi songs, Bengali folk dance etc. 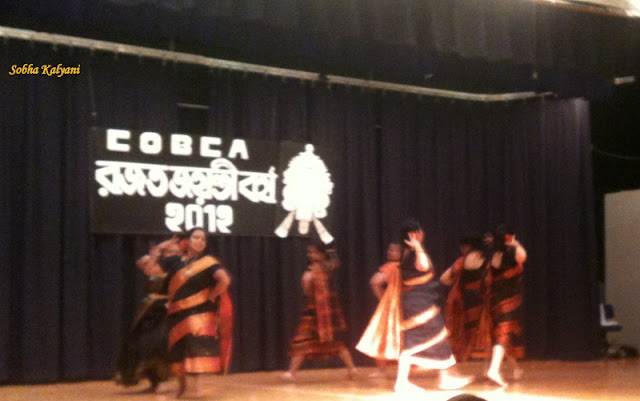 After the cultural programme was over, devotees / guests entered into the hall where the beautifully decorated idol of Maa Durga Devi was installed. The ambiance was very homely and makes the Indians feel at home / in India. The hall was crowded mostly with Bengali people and of course people from other Indian states too. There were few non-Indians too were seen taking part in the celebrations.

Devotees were getting ready for the final part of the pooja which is a grand event. Yes, it is the aarti i.e waving lighted camphor to the goddess. Aarti is typically accompanied with typical Indian drum beat, beats of cymbal, blowing of conch and ringing of bells.

Blowing of conch during aarti is a typical Bengali culture and also followed in the North. South Indians do not follow this tradition of blowing conch at aarti time.

Anyway, there was a typical Indian culture in a distant / far away foreign land which might have made every Indian feel proud of their rich cultural heritage. As aarti began, devotees started beating the drums, blowing conch, ringing bells and most of them were deeply engrossed in typical Bengali dance moving in circles with clapping hands accompanied with rhythmic drum beats. 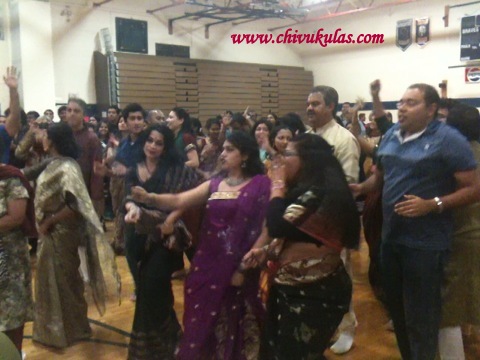 "Olololololoo! Olololololoo!" The ecstatic screams / shouts of the devotees reverberated in the hall along with the rhythmic drum beat. The entire hall was filled with divine vibrations.

For a while people / devotees were lost in a different spiritual world. There was too much of Indianness in the air around and devotees were dancing with high spirits. That was truly Indian in the mid-west America. Finally, it concluded with the aarti and some of the devotees were still enjoying divine bliss.

The divine ecstasy culminated with aarti distribution to devotees and prostration before Goddess Durga Devi. Everyone got back to the present material world, started wishing one another, saying good bye / see you to each other and thus the devotees dispersed.

That was a wonderful experience of Durga Puja in a Western land - far far away from my motherland yet with a homely feeling.
Columbus Dussehra U.S.A