A road trip from Hyderabad to Vikarabad enroute Mehdipatnam, Langar House, Chilkur, Moinabad, Chevella and Vikarabad to reach Ananthagiri Hills is an exciting experience. Ananthagiri is situated at an altitude with panoramic viewpoints and wandering about in the forests in this region would be a thrilling and adventurous experience.

Ananthagiri is located at a distance of around 75 Km from Hyderabad and around 6 Km from Vikarabad in the Ranga Reddy District of Telangana. This is a mini hill range with rich forest surrounding the area which makes it an ideal eco-tourist spot particularly for trekking and walking in the forest. 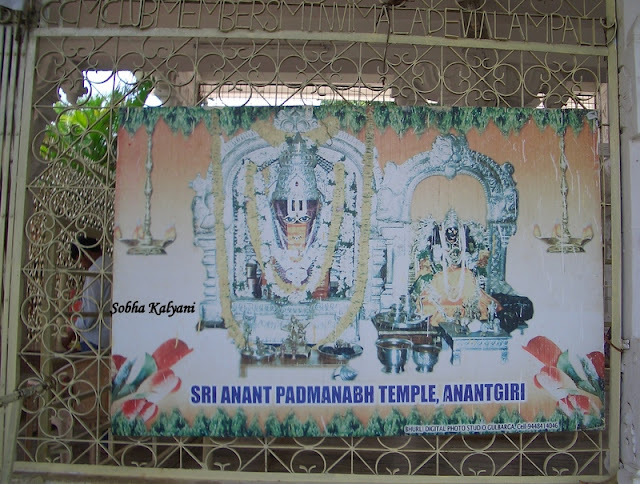 The place derived its name from Anantha Padmanabha Swamy Temple which is the main attraction of the place. The main deity of the temple, Anantha Padmanabha Swamy, is believed to be one of the incarnations of Lord Vishnu. As per Sthalapurana / local legend, it is believed that Markandeya Maharishi, a devotee of Lord Shiva, selected this pleasant and peaceful area for observing Yoga Sadhana or deep penance which is believed to be lasted for around 1400 years. After meditation, the Rishi daily used to go for a Holy dip in the Holy Ganges at Varanasi (Kasi) through a cave tunnel.  Lord Vishnu who was please with his stern devotion appeared before Markandeya in the form of Anantha Padmanabha Swamy inside a cave. Once during the Dwadasi time, the sage couldn't make his way to Kasi for the Holy dip and hence was upset for the break in his penance.

Lord Vishnu was much pleased with the Sage's determination and devotion and thus appeared before him in the form of Anantha Padmanabha Swamy. Lord Vishnu arranged to bring down the waters of Holy Ganges for the uninterrupted penance of the Sage. It is believed that later Markandeya Maharishi was blessed to take a permanent place in the world by transforming into River Musi.

As per Skanda Purana, it is believed that the temple was built by Markandeya Maharishi in the Dwapara Yuga (the period when Lord Vishnu incarnated on Earth as Lord Krishna. It is believed to be the period before the present Kali Yuga). 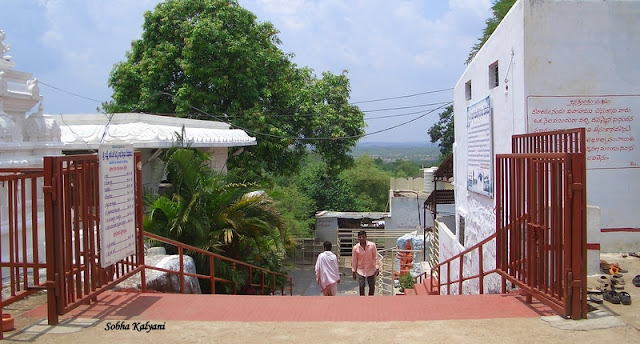 Presently, there are deities of the Lord inside the cave and devotees flock to have His darshan. The temple remains open for devotees through out the day from 7.30 a.m to 8 p.m. It is flooded with devotees particularly on weekends and special days of religious importance.

According to a unique history of the temple, it is mentioned that Anantha Padmanabha Swamy appeared in the dream of the Governor of the Province of Vikar and asked him to build a temple. The temple was constructed during the Nizam period. As per the directions of the Lord, the temple was built in the same place where Lord Vishnu appeared as Anantha Padmanabha Swamy to Markandeya Maharishi who was blessed to transform into River Musi.

There is a standing statue of Lord Hanuman near the temple where from you can walk down the steps. Here you can find rich flora which include trees, creepers etc with natural as well as man-made caves and some historic symbols of religious importance.

After the darshan, you can take the exit and reach the 'prasadam' counter for purchasing Pulihora and Laddu prasadam. Prasadam is tasty and costs Rs.5/- each.

You can also go down the steps from inside or outside the temple to reach Koneru or Pushkarini - the Holy temple tank where you can have a dip. On the way to Koneru, you can see Markandeya Rishi Temple

Besides Anantha Padmanabha Swamy temple, you can visit Bugga Rameshwaram temple and Bugga Waterfalls. This is a Shivalayam i.e Shiva temple which is located at a distance of around 1.5 Km from Anantha Padmanabha Swamy temple towards the left. There is an underground spring near the temple which is believed to be the origin of River Musi. You can see the waterfalls only when there are heavy rains during the monsoon season. If you visit the place during summer, you will be disappointed to see no waterfalls.

You can have a one day road trip from Hyderabad or if you want, you can stay over night in Haritha Valley View Resorts operated by the Telangana State Tourism Development Corporation (TSTDC). There are luxurious AC rooms with catering and service facilities as well for a comfortable stay. Though accommodation is available round the year, yet it is better to book online reservation from the official website of TSTDC or you can contact # 08416-256800 for more information.

When you take a road trip in your four wheeler or book a cab from Hyderabad, you will enjoy the most. However, there are regular private and RTC buses well connected to Vikarabad from various places of the twin states of Andhra Pradesh and Telangana. You can even reach the place via rail route to Vikarabad from major cities of the twin states. However, the nearest airport to the place is RGIA at Shamshabad in Hyderabad.

You can even have customized package tours organized by TSTDC.
Divine Destinations Telangana Tourist Places