Belum caves known as Belam Guhalu by the locals, are located in a village named Belum in the Kurnool district of Andhra Pradesh. According to historical evidences, these caves were inhabited by Buddhist monks and Jains in the past. Remnants of pre-Buddhist era vessels were found in the caves that date back to 4500 B.C.E (Before Current Era).

Though the caves were noticed by a British archaeologist in the late 19th century, these remained unnoticed till further exploration was made by a German team in 1982-83.

The Telugu word 'Belum' is a transformed word of 'bilum' which means cave. 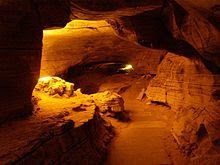 Belam Guhalu are a part of a large caves complex in the Erramala region in Kurnool district. These caves are carved out of black limestone deposits. There are also deposits of quartz in the caves. There are 3 openings - main entrance and pit cave while the 3rd entry is blocked. Though, 3.5 Km of the cave had been explored only 1.5 Km is open for the tourists.
Andhra Pradesh Tourism Development Corporation (APTDC) developed these caves into tourist attractions and beautified these with illumination and fresh-air-shafts inside the caves. The caves are well maintained / managed by APTDC which installed bridges, railings and stairs for the easy movement of the tourists inside the caves.
It has also provided other facilities for the tourists like canteen and washrooms at the entry point.

Belam guhalu are the underground caves that are naturally formed due to the perennial flow of underground water. There are long passages and spacious chambers in the caves. 'Paataala Ganga' is the deepest point of the caves which is at a depth of 150 feet from the entrance level. The caves are 3229 metres long and are the second largest natural caves in India. 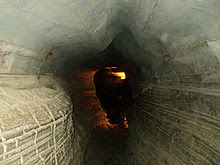 There are electronic iron gates at the entrance and metal staircase to reach the caves.

Tadipatri, which is in the main line, is the nearest railway station to reach the caves and is at a distance of 30 Km. There are frequent buses from the station that ply to Belam Guhalu. Private cabs are also available.

It's an interesting place for family picnics and for geologists to research. However, the road leading to the caves is in average condition. There are resting places outside the caves and APTDC run Haritha resort. There are narrow serpentine paths inside that takes you to different sections in the cave. It's a well maintained place which is enjoyable and interesting to explore. It's humid inside the caves.