- September 30, 2018
Srikurmam temple is one of the lesser known Hindu temples in India. The main deity of the temple is Srikurmanadha - the 2nd incarnation of Lord Vishnu's Dasavataram (i.e 10 incarnations). 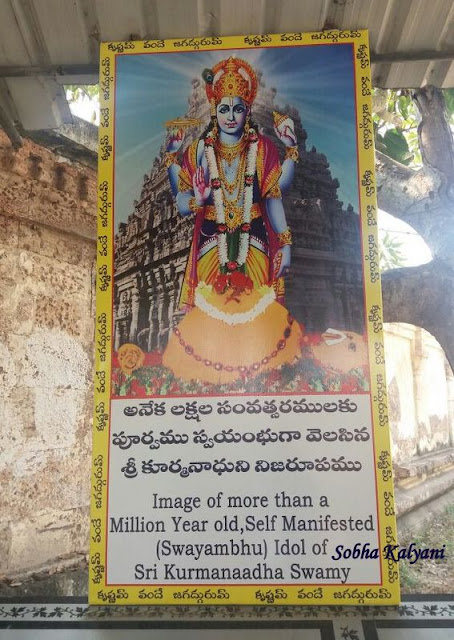 The deity of Srikurmanadha in the temple is a 'swayambhu' (i.e self-appeared) one. The shrine is believed to be more a million years old and the only 'Swayambhu' temple of Lord Vishnu, in the world. The outer structures of the temple was restructured several times. The present structure is 700 years old. 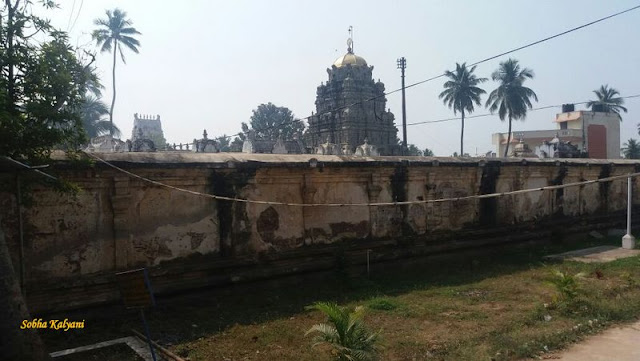 The temple of Srikurmadha is one of its kind in the world. It is believed that the small village of Srikurmam is 20 lakhs years old. The village is located in the Srikakulam district of Andhra Pradesh.

The uniqueness of the temple is that, it has two 'dhwaja sthambhas' i.e the flag posts in front of the main temple. The 2nd 'dhwaja sthambham' is in the West as the main deity is West-facing. Till 11th century C.E (Current Era), the main deity was East-facing. It is believed that the deity turned to West-facing to appear / bless His devotee Saint Ramanuja who was sitting and meditating on the West side of the temple. Later the 2nd 'dhwaja' was installed in the West.

There are centuries old rare mural paintings on the temple walls. These paintings are very much similar to the paintings of Ajanta and Ellora caves. The ancient stone sculpture of the temple is known as Gaandharva Shilpa Kala. There are 108 beautifully carved stone pillars, each one with a different carving.

There is an underground tunnel on the North-East of 'pradakshana mandapam'. The tunnel directly leads to / opens at Varanasi (Kasi). Currently the entrance of the tunnel is closed as there are wild animals and snakes all along the tunnel. 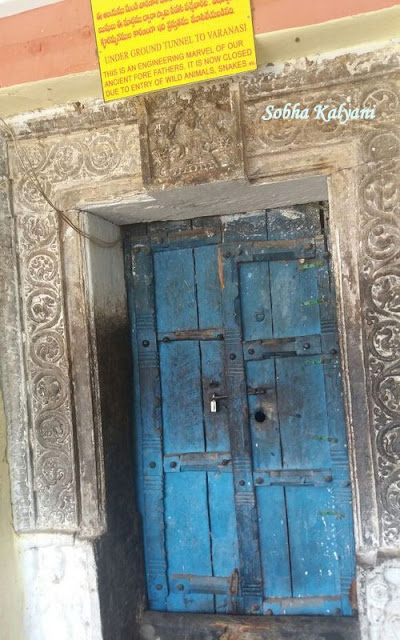 The temple tank is known as 'Sweta Pushkarini'. It is believed that the 'pushkarini' is formed due to the use of 'Sudarshana Chakra' (the Celestial Disc) by Lord Vishnu. It is said that Goddess Lakshmi Devi emerged from the 'pushkarini' seated on the back of 'Garuda' the Divine vehicle of Lord Vishnu. The goddess is seated in this place as Kurma Nayaki (the wife of Sri Kurmanadha). 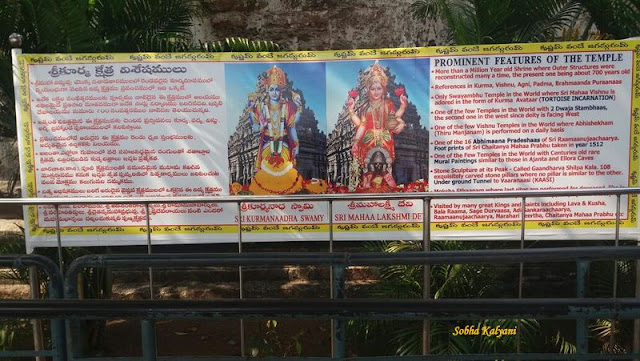 It is believed that every year, on Magha suddha chaviti day (i.e the 4th day of the brighter half of moon in the Hindu month of Magha), River Ganga Devi takes a holy dip in this 'pushkarini' to cleanse herself from the sins that she gets from the pilgrims who take holy dips in River Ganges. Thus, River Ganga purifies herself by taking a dip in this 'pushkarini' that has the cosmic power of cleansing. As per records many great saints / kings in the past visited the temple.

How to Reach:
Srikurmam is located in the East of Andhra Pradesh and Odisha border. It is easily reachable from Srikakulam either by bus or train. You can book a cab / auto rickshaw from bus / railway station to reach the temple. It is 13 Km from old bus station, 15 Km from the main bus stand and 25 Km from the railway station. There are frequent APSRTC (Andhra Pradesh State Road Transport Corporation) buses to Srikurmam temple.
Visakhapatnam airport is the nearest one which is at a distance of 110 Km.
Andhra Pradesh Divine Destinations Tourist Places