- September 27, 2018
At Chenchu Lakshmi Tribal Museum in Srisailam, you can have a peep into the tribal life / culture. It reminds one of the Tribal Museum in Araku Valley in Visakhapatnam District . 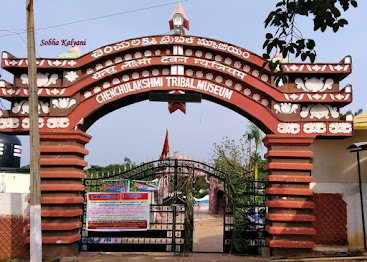 The museum is small yet it is worth a visit, particularly for those who are keen on having a peep into the Indian tribal life / culture. The museum opens at 8.30 a.m and closes at 8 p.m. There are very few visitors at this place, may be many don't know that there is one such museum in Srisailam. The entry ticket is at a very low price i.e Rs.20/- per person and Rs.10/- per child for children in the age group of 5 to 10 years. 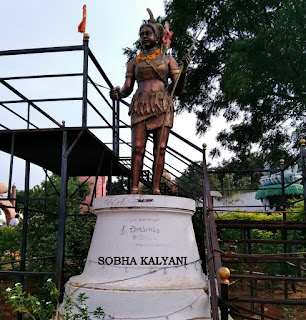 On entering inside the gate, you can see properly maintained greenery and some ethnic structures all around. In the garden, there is life-size statutes of a tribal couple and the statue of Chenchu Lakshmi.

Here is a briefing on 'Chenchu Lakshmi'. According to legends, it is believed that Goddess Lakshmi Devi incarnated as an adivasi (tribal) woman in the Chenchu tribal community. She was a brave woman and skilled archer who married to Lord Narasimha Swamy in His human form.

On entering inside the museum through the arch shaped structure, 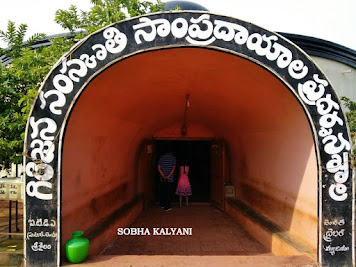 you can see the life-size statue of an Adivasi (tribal) snake charmer sitting on stones in front of the ant hill in a typical posture and playing music with the traditional piper. 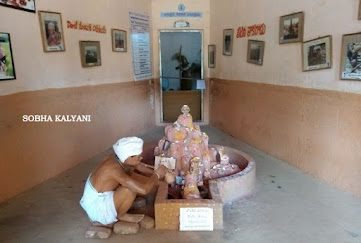 Taking photos / clicks inside the museum is strictly prohibited. So, visitors need to leave their cams in their vehicles or inside their handbags. There is no special counter to keep your cams. It goes on trust with the visitors. On entering inside, you can go round the museum to have a glimpse of the Indian tribes and their lifestyle.

As you go up the stairs, you can see a tribal couple sitting inside a thatched hut and extracting honey from the comb while a man repairs his bow standing out the hut. You can see the typical ethnic house hold stuff like earthen pot, bamboo containers and a dappu (local traditional drum).

On going further up the stairs, there is the statue of a man repairing his dappu inside the hut. Few local stuff like the two-piece grinding stone (known as 'tiragali' in Telugu language), a bamboo basket and few iron things scattered inside the hut.

Likewise, you get to see the tribal life / culture of following Indian tribal communities: After getting around the small dome shaped tribal museum, you get to know much about the tribal life and their culture as you read the detailed information written about these tribal communities, on the walls.
The tribal museum in Srisailam is one of the best places for a family visit and one of the must-visit places in Srisailam. From here you can visit Phaladhara Panchadhara which is yet another must-visit places in Srisailam.
Andhra Pradesh Museums Srisailam Tourist Places