Importance and Significance of Ashada Masam

- June 27, 2016
Ashadam is the 4th month in the Hindu Lunar calendar. It is usually considered as inauspicious in the Telugu-speaking states of Andhra Pradesh and Telangana and in Karnataka. It is known as 'Soonya Masam' in Telugu. No social functions like marriages, griha pravesam, thread ceremony etc are performed in this month.

Read the names of 12 Hindu months.

There is a unique tradition followed in the Telugu-speaking states and in Karnataka. The newly married bride should not stay with her mother-in-law (MIL) in the same house during this month. So also the newly wed groom and his MIL should not stay together in the same house. When, I researched on this topic I couldn't find a convincing reason for this custom. However, I think that there could be some inner meaning / importance of the same which has been laid down by our ancestors for the well being of all.

As per the belief, the newly wed brides go to their parent's house in this month and get back to their in-law's house in the month of Sravanam. This rule is applicable only for the 1st year after marriage. There is no known scientific reasoning for this and is not much in practice in the present tech dominated world.

It is monsoon / rainy season in India during Ashadam and there is much of life i.e greenery all around. 'Gorintaku' i.e mehendi has a special significance in this month. It is customary for the Telugu women, both married women and young unmarried girls, to apply mehendi on their palms with freshly plucked tender henna leaves. And it is compulsory for married women to apply it during Ashadam as it signifies prosperous married life. 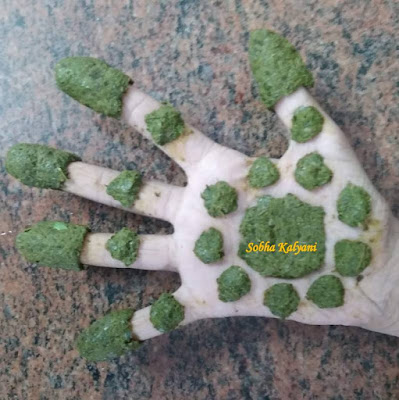 Karkataka Sankramanam i.e transition of Sun into Karkataka Rasi, takes place in this month which is considered as the beginning of Dakshinayanam i.e the Southern hemisphere of Earth starts tilting towards Sun and nights start becoming longer and longer.

It is believed that the next 6 months i.e till Makara Sankranti, it is night time in the Deva Loka.

In Telangana, Bonalu festival is celebrated on the 4 Sundays of Ashada Masam.

Ashada Suddha Ekadasi i.e the 11th day of the month after Jyestha Amavasya (moonless night), is celebrated as Tholi EkadasiTholi which marks the beginning of Chaturmasam. This is the day when Lord Vishnu is believed to enter into Yoganidra i.e Divine sleep.

The full moon day of Ashadam is the birth of the great Sage Veda Vyasa and is celebrated as Guru Purnima.