- May 08, 2016
On repeated requests from my readers, I am posting sharing the memories of my travel experiences to different places in India and abroad. This is my third post in the series of my London Memories. The series includes watching Changing of Guard at the Buckingham Palace and our visit to the Tower Bridge of London i.e. the famous London Bridge.

After enjoying the weekend watching the Changing of Guard at Buckingham Palace and spending some time at the London Bridge, the next day our visit was to London Eye, yet another important tourist attraction. After breakfast, we walked for a while on London roads and purchasing few items. And then we took the tube to London Eye, I think it was Waterloo Station. The weather continued to be chill and cloudy with slight drizzle.

On reaching the station, we absolutely had no idea of the route We waited for a while and the tube arrived and halted at the station very smoothly. The doors opened by automated system and we stepped inside the tube. Within seconds of our boarding the automatic doors closed and the tube move swiftly.

As it was my first experience of traveling in a swiftly moving underground tube, I was a bit scared and tightly held my husband's hand. However, it was a exciting experience moving in the underground tube.
After getting down at Waterloo station we were in confusion. We absolutely had no idea about the route to London Eye as it was an unplanned trip. However we could manage to walk all the way with the help of the signs and reached the South Bank of River Thames. And as we saw the gigantic Ferris Wheel from a distance we took few quick snaps.
The weather was too cloudy and it continued drizzling. We proceeded to the ticket counter, got the tickets easily as there were no long lines.

There were no long lines during our visit so we could easily reach the spot to board the passenger capsule. I was surprised to see that the Ferris Wheel is moving so slowly that it need not stop for the passengers either to board or disembark. However, it stops for PWDs (people with disabilities). Though the capsule keeps moving passengers can board / disembark with ease.

When it was our turn we boarded the passenger capsule and were inside the capsule. The capsules are spacious and visitors can move around to have breathtaking views of different spots from different places in the capsule. Here, I would like to give some info on London Eye.

This is an iconic structure of London and one of the most visited tourist attractions in London. The Giant Wheel is 135 m (450 feet) high and is one of the largest cantilevered observation wheels in the world. It is an ultra-modern structure i.e a giant Ferris wheel with high tech construction that was launched in 2000. During our visit in 2007 London Eye was also known as the Millennium Wheel and was owned / run by the British Airways (now as per an agreement, this is known as Coca Cola London Eye).

London Eye is located on the South Bank of River Thames. The diameter of the wheel is 394 feet (120 m). The wheel which rests on two supports, is connected to a hub by cables. There are 32 oval shaped AC capsules mounted on the wheel. Each capsule has the capacity to carry 25 passengers. These capsules remain upright as the wheel moves. As the wheel moves slowly ,it takes 30 minutes complete one round.

As we neared the Wheel, we were awestruck on seeing the perfect man-made gigantic structure.

After we stepped into the capsule along with our co-visitors the capsule door got closed and the wheel moved slowly unlike the fast moving giant wheels. The capsule was slowly moving up. As it moved up slowly, from a height we spotted people walking down. 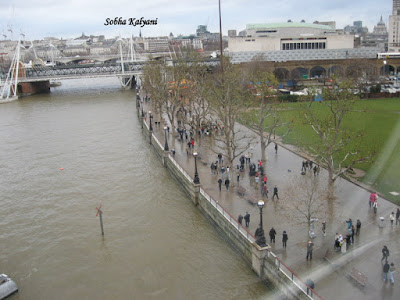 I was too excited on viewing the famous tourist spots of London and River Thames from a height. All the visitors including us were busy taking quick clicks from different angles. There was a caution 'Do not lean on the door'. Slowly the passenger capsule moved up and up and up.
We were slowly taken to a height of 450 feet above the ground level which is the topmost point of London eye. We had a wonderful experience of the spectacular view viewing Big Ben, House of Parliament, River Thames and other structures from such a great height. I was so thrilled that for a while I just forgot everything and was wondering "where am I"?

You can flip through: Walking on the roads of London