Deepavali - The Hindu Festival Of Lights 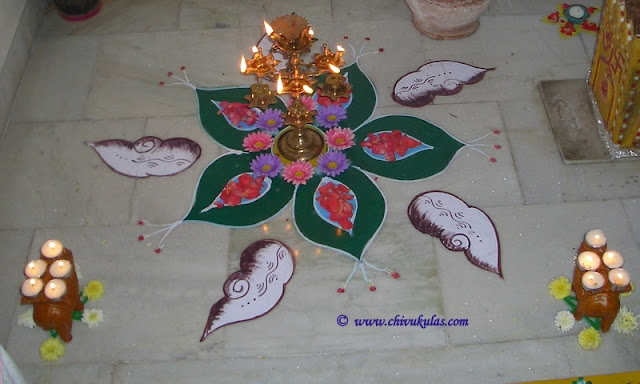 'Tamasoma Jyotirgamaya' - one of the famous prayers in Hindu Upanishads which literally means 'lead me from darkness to light'. Darkness zeros down the visibility while light makes things clearly visible. One should come out of the darkness i.e ignorance and go ahead in the lighted / enlightened path for a harmonious and healthy living in the society.

Deepavali is one of the most important and popular Hindu festivals. It is celebrated on the dark Amavasya (No Moon) night / moonless night in the Hindu month of Aswayuja. It has become a tradition for Hindus to light up their homes with traditional oil lamps i.e diyas on Deepavali night to kill the darkness of Amavasya.

Dussehra Navratri is followed by Deepavali. People across the country continue to be busy with the chain of festive celebrations.

Naraka Chaturdasi signifies the victory of good over evil. It is believed that Satyabhama, one of the eight wives of Sri Krishna killed Narakasura on this day. Hence the festival is celebrated across the country as Chota Diwali (pre-Diwali) or Kalichaudas in the northern states. This festival is celebrated on the 14th day after Aswayuja Pournami (the full moon day in the Hindu month of Aswayuja) i.e Kumara Purnima day. The next day i.e the day of moonless night / Amavasya day is the much awaited day across the country. It is on this day the Hindu festival of lights called Deepavali or Diwali is celebrated with much fervor and enthusiasm by all the Indians irrespective of their religion.

The 5-day festival of Deepavali is celebrated in the Hindu months of Aswayuja and Kartika Masam.

Day 4 - celebrated as New Year's day in the northern regions of the country particularly by the business community when they start their new accounts.

The Hindu festival of lights, Deepavali / Diwali, is a series of festival celebrated with dhoom dham across the country. People burn crackers and fireworks on this day. While the women folk enjoy decorating their homes specially with fresh flower garlands, rangolis and traditional earthen lamps. Unlike the Diwali celebrations of the olden days, there are many harmful effects of the fireworks and there need to be a check on the same.

Wishing All The Readers A Safe, Environment-friendly and Happy Deepavali!
Deepavali Festivals of India Hindu Lifestyle