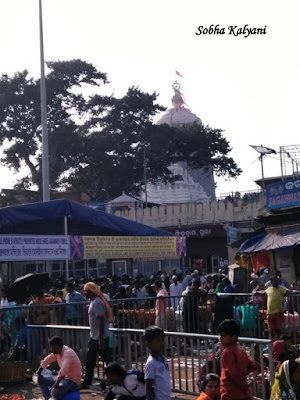 Lord Jagannath Temple is located in the Grand Road (Bodo Dando) in the small temple town of Puri which lies in the East coast of the Indian state of Odisha.

How to reach Puri

Puri is not only an important Hindu pilgrim place but also has a great tourist potential, hence there is no dearth for accommodation. You can find a row of luxury as well as economy hotels along the beach road with a beautiful view of the Bay of Bengal. Most of the hotels have restaurants that provide local as well as continental foods catering to the needs of the tourists and pilgrims as well. Some of the hotels provide home like atmosphere where you can sits on the steps of the open spacious veranda and enjoy the sea view.

Lord Jagannath temple is located in the ancient small temple town of Puri which has historical importance too. Many Hindu saints and sages in the ancient times like Bhakta Jayadev, Adi Sankaracharya, Paramhamsa Yogananda and his spiritual guru Yukestwarji and others, happen to visit this important town and established Mutts and spiritual centers in this place. Adi Sankaracharya established the famous Sankara Matt named Govardhana Matt. Puri is one of the four dhamas of India.

Though the town is located on the East coast, yet you can see not only the Sunrise over the Bay of Bengal but also you can see the Sunset in the Bay of Bengal as you see in Kanyakumari, Tamil Nadu. This is the uniqueness of the place which attracts many a tourists. The reason being a curved land with a portion of sea water on the Western side of the land as well.

Lord Jagannath temple is one of the ancient Hindu temples which has its mention in the Puranas (the oldest Hindu scripts written in Sanskrit language). As per historical evidence, the temple dates back to the 9 century CE.

As you enter into the temple complex through the Lions Gate, you can see a tall monolithic pillar known as Aruna Stambha which was shifted to Jagannath temple from Konark Sun temple. Immediately on entering into the temple complex you have to ascend a flight of 22 flat steps leading to the main temple. On climbing the steps you can see the kitchen on your left where the naivedyam or prasad and maha prasad is prepared for Lord Jagannath in the most traditional and ancient way with the use of fire wood and earthen vessels. On your right you come across Ananda Bazaar where the prasad and maha prasad or the food offered to the Lord is kept on sale for the devotees.

Inside the temple complex which is too vast, you can find around 120 small and medium temples of different deities viz Sarvamangala Devi, Navagraha, Mahalakshmi etc. In the mid of the vast open space you will find the majestic and beautifully carved temple of Lord Jagannath which reflects the rich temple architecture of ancient India. According to historical records, the temple was built by Anangabhima III of the Ganga dynasty.

On entering into the main temple, you will have the divine darshan / sight of three majestic and colorful wooden deities of Lord Jagannath, Lord Balabhadra and Subhadra Devi. Lord Jagannath is believed to be a form of Lord Krishna who is one of the incarnations of Lord Vishnu and Lord Balabhadhra is Balaram - elder brother of Lord Krishna and Subhadra Devi is the sister of Lord Krishna. The wooden deities are unique in their own way as these are half carved images. Legends say that King Purushottam intended to carve deities with the huge logs of devadaru (deodar) wood that he got floating in the sea water. According, the work was entrusted to the Divine Sculptor Deva Shilpi Viswa Karma who took a promise from the King not to disturb him while he carves and not to open the door till the divine work is completed. But King Purushottam out of curiosity breaks his promise to Viswa Karma and opens the door and thus Viswa Karma disappears leaving the half carved images.

It is believed that Lord Vishnu is Bhojana Priya or fond of delicacies and hence daily he is given upa bhoga / bala bhogo (breakfast) which include sweet items like Khoja (kaja), pitha, sooji laddu etc and maha bhoga (main naivedyam) which is offered in the afternoon include major items like rice, lentils (dal), curries, sweets like kanika or kheer and other delicious dishes. On offering to the Lord these food items are taken to Ananda Bazaar where these are sold to the devotees.

However, beware of the local guides (pandas) in this area who keep on following you and offering their services though you don't need them and finally they demand few bucks from you. If you don't pay them, they keep on cursing you. There are some pandas in the temple complex, who hit you on your head with a long bamboo stick, offer you prasad (eatable) and then demand some money from you.

Every year on the second day (vidiya / dwitiya) in the Hindu month of Aashadam, the famous and grand festival of Ratha yatra is celebrated. And once in every 12 years, generally when there is an adhika Aashadam (extra month of Aashad in addition to the original Aashad), Navakalevara yatra is celebrated when the old wooden deities are replaced with new ones in the sanctum sanctorum. The wood of devadaru / deodar tree is used to carve the deities.

Bhakta Jayadev was one of the greatest devotees of Lord Krishna / Lord Jagannath who authored Gita Govinda which is a lyrical composition of 12 chapters each of which is sub-divided into 24 Prabandhas and each prabandha containing Ashtapadis which are mostly romantic songs based on Lord Krishna and Radha and also on Krishna and Gopikas.
Divine Destinations Odisha Puri