Importance And Significance Of Karthika Purnima

- November 15, 2013
Kartika Pournami - the full moon day in the auspicious Hindu month of Kartika Masam is considered highly auspicious for worshiping Lord Shiva and Lord Vishnu as well. The day is highly important for lighting up oil lamps by the women folk, married women in particular. These oil lit lamps are then released into the nearby water sources. The festival is celebrated with much fervor and great devotion across the length and breadth of the country.

People are mostly engaged in various religious activities on this day. Some perform Rudraabhishekam while some perform Satyanarayana Vratam on this auspicious day. Coincidentally, Guru Nanak Jayanti (the Sikh guru's birth anniversary) is celebrated on this day.

According to legends, Lord Shiva demolished the strong forts of Tripuri (made of gold, silver and iron) of the most powerful demon king Tripurasura on Kartika Purnima day. These three forts were believed to be in continuous motion (movement). The forts got the boon of getting destroyed with a single arrow. As the three forts were in continuous motion, it was difficult to destroy these with a single arrow. However, it was on Kartika Pournami day these three forts came in alignment for a couple of minutes when Lord Shiva took advantage of the situation and with a lightening speed shot an arrow which went through the three forts thus demolishing these into pieces. People across the worlds rejoiced the death of this mighty Asura by lighting lamps. Thus Shiva got the name of Tripurantaka (Tripura + antaka means the one who destroyed / brought an end) and Tripurari (Tripura + ari (means enemy). The day known as Deva Deepavali in some regions and Tripuri or Tripurari Poornima in some regions.

Celebrations in different regions of India

The day is known as 'Donga Bosa' or 'Boita Bandana' in Odisha. The women folk release / float oil lit lamps in special made and specially decorated small boats made of light weight materials. 'Donga' is the Odia word for 'boat' and 'bosa' means literally means sit but in this context release.

Kartika Purnima is very special for women folk, in particular married women who observe fasting on the day during the day time and perform daily pooja as usual. Some of the elderly women keep themselves engaged in various religious activities like listening to Kartika Puranam, reciting / chanting religious hymns, singing bhajans, reading religious scriptures or going to the nearby temples to spend some time in the positive atmosphere which helps in developing positive thoughts in the mind. After fasting the whole day, in the evening before sunset, the women folk start their preparations for the Kartika Deepaaradhana i.e lighting up of oil lamps.

In some regions women / married women, light up rows of oil lit earthen lamps round the Tulasi Kota / the potted Holy Basil plant. There is a specified number of lamps to be arranged in rows which differs depending on one's family custom. Most of the married women bundle up 365 cotton wicks, wet these with cow's ghee i.e clarified butter and place the bundle in a wide earthen lamp and lit the bundle of 365 wicks. This signifies the lighting of lamps for the whole year / each day of the year. 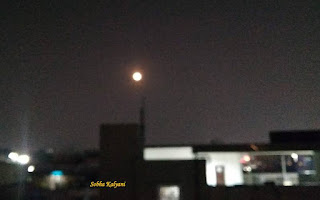 In some other regions, married women go to the nearby water sources like lakes / rivers / ponds / temple tanks (pushkarini), release Kartika Deepams placed in boat shaped cut stem of the plantain tree and let these deepams float in the water either early in the morning on this auspicious day or in the evening after sunset. It gives a beautiful looking when the entire area gets illuminated with lamps and float lamps.

While in some other regions of India, people place these lamps in small baskets specially meant for the purpose and release these in the air which move up like the hot air balloons. These are called the Akasa Deepam which give a wonderful appearance when these float in the air in good numbers like small hot air balloons.

The culture of lighting oil lamps ends with the Kartika Pournami celebrations. In addition to this lighting of lamps, people in particular children burn the left over crackers on this day. The night is celebrated like a Chota Diwali

The women folk who observe fasting on this day, light up oil lamps after the sunset and moon rise. The full moon glows bright and looks really beautiful on this special day. After all the formalities are completed in the evening, the women who observe fasting, break it by eating a specially prepared sweet (naivedyam) called Chalimidi which is made of a combination of rice flour and sugar syrup.