- October 19, 2013
Suddha Dwadasi i.e the 12th day in the Sukla Paksha (brighter half of moon) - after Deepavali Amavasya - of the auspicious Hindu month of Kaartikam is celebrated as Ksheerabdi Dwadasi. 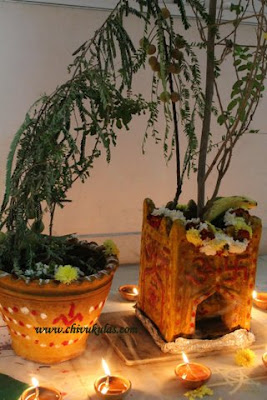 The Holy Basil plant (Tulasi) which is considered an incarnation of Goddess Lakshmi Devi - the wife of Lord Vishnu is very sacred for the Hindus and the plant is compulsorily grown in almost all the houses and temples. The sacred Tulasi plant is worshiped on this Ksheerabdi Dwadasi day.

It is believed that Lord Vishnu resides in the Indian Gooseberry plant and hence a twig of this plant is placed beside the Tulasi plant on Ksheerabdi Dwadasi while performing pooja. The Holy Basil plant is also known by the name Brinda. According to Hindus, whoever worships Tulasi plant with complete devotion on this special day particularly the married women, is blessed with a long, prosperous and happy married life.

Most of the Hindu married women perform Ksheerabdi Dwadasi pooja on this auspicious day which involves special offerings after the recital of Tulasi Ashtottaram and Ksheerabdi Dwadasi Vrata Katha along with special deepaaradhana or lighting of earthen lamps.
Andhra Pradesh Festivals of India Hindu Lifestyle Telangana Telugu Lifestyle