Hindu goddess Saraswati is the wife of Lord Brahma (the Creator) and is believed to be the goddess of learning. She is portrayed with a white sari (a typical Indian costume worn by the women) carrying a Veena (a stringed musical instrument played by the Carnatic classical musicians). The name of the Veena held by Saraswati is known as Madalasa and she uses hamsa or swan as her vehicle. 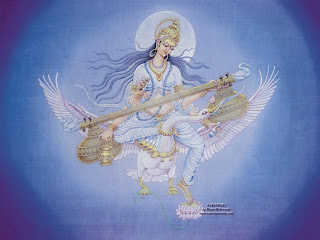 Every Hindu family worship Goddess Saraswati when they perform aksharabhyasam - the first education of their child and seek Her blessings for good education for their children.

Also read: Basant panchami is also known as Siri Panchami is celebrated as the birth day of Goddess Saraswati.