- November 05, 2011
Ganesh Chaturthi is a 10-day (actually 9-days) festival celebrated all over India. It is also known as Vinayaka Chaturthi and Vinakaya Chaviti.

The festival is celebrated on Bhadrapada Suddha Chaviti day i.e on the 4th day after Amavasya (the day of moonless night) in the Hindu month of Bhadrapada. It marks the birthday of Ganesha.

Also read: The story of birth of Ganesha

Ganesha also known as Vigneswara is the elder son of Siva and Parvati. He is the most worshiped Hindu god. Every social / religious function begins with - Suklam Baradharam - the powerful Ganesha mantra. The initial prayer is offered to Ganesha in view of an obstacle-free celebration of a function / venture as Ganesha is believed to be the remover of obstacles. It is believed that Lord Vigneswara scripted the great Hindu epic of Mahabharata while sage Veda Vyasa was visualizing the entire episode of Mahabharata and was narrating / dictating the same to Him. No one else dared to undertake this Herculean task of writing the great voluminous task except Ganesha

The festival is celebrated for a continuous period of 9 days from Bhadrapada Chaturthi day and is known as Ganesha Navatri. It ends on Ananta Chaturdasi day when the huge idols are taken by the devotees in grand gala procession and immersed in the nearby water sources. This is known as Ganesh Nimajjanam (known as Visarjan in North).

On this festival day, beautifully decorated huge idols of Ganesha made of eco-friendly material are brought in grand procession and installed at community platforms / pendals on the roadsides of every city, town and village of the country. After the installation of the idol in the pendal, the priest chants Vedic hymns and invokes the god. This is known as 'Pranapratistha' which is followed by 'shodashopachara pooja'. The important part of the pooja is 'ekavinsati patri pooja' i.e worshiping Ganesha with 21 varieties of leaves which of of great medicinal value.

Vinayaka Chavithi pooja is performed by a priest preferably during 'madhyahna kalam' i.e midday / forenoon as it is believed that Ganesha was born at this time.

Lord Ganesha idols are made in different styles / figures and devotees worship for 5-9 days with much devotion. After pooja, special naivedyam called 'modak' / undrallu or kudumulu in Telugu, is offered to Lord Ganesha. 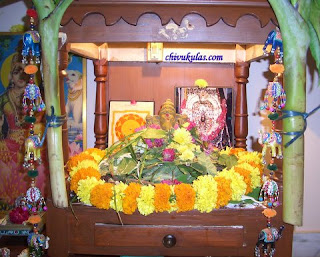 Ganesh Chaturthi is celebrated in each and every house irrespective of caste and creed. People place small clay idol of Ganesha in / near the Pooja Mandap in their houses. All the family members sit together to perform pooja and worship with devotion. For performing 'eka vinsati patri' pooja at home, one can use the available leaves in the region. Worshiping with complete devotion and dedication is more important than running hitherto for collecting the leaves.

It is said that one should not see the crescent moon on the Ganesha Chaturthi day. If one happens to see the moon by chance on this day, one will be falsely accused. This is because of the curse to Moon by Parvati Devi

Related topic:The story of Ganesha and the curse of moon

Generally 'udyapana' is done on the next day while others do it on the 3rd day or 5th depending on their custom / convenience.

As per the historical evidence, Maratha ruler Chatrapati Shivaji had initiated Ganesh Chaturthi festival celebrations in view of promoting nationalism. The celebrations were confined to Hindu families for a long time. Later social reformer and freedom fighter Lokmanya Tilak (Bal Gangadhar Tilak) brought back the tradition of Vinayaka Chavithi Pooja celebrations to the public platform in a grand way. It was celebrated in entire Maharashtra and later people of other states too started celebrating the festival. Presently, the festival is celebrated with a competitive spirit with the installation of the tallest idols of Ganesha.

Celebrate the festival by installing Eco Ganesha and save the environment from getting further polluted.
Festivals of India Hindu Lifestyle