- December 16, 2019
About this post: In this travel blog post, I wrote about travel experience to Switzerland from India (Hyderabad) in July 2019, the experience of flying in Ice Flyers in Mt Titlis, walking on Suspension Bridge and a walk around in Interlaken, Lucerne and Zurich, which is recommended for Indians who wish to go on a summer trip to Switzerland - an exotic part of the world.

The Bollywood (Hindi films) and Tollywood (Telugu movies) flicks of the late 80s and early 90s, made Switzerland a dream destination for many Indians. The imposing Alps, the lush green meadows in summer, the wooden houses and the rolling valleys, these regions get crowded with Indian tourists in summer.

It was a 5-day trip to Switzerland from Hyderabad in India in July, 2019. Though there are direct flights from Hyderabd to Switzerland via Dubai, somehow our Emirates flight was from Mumbai to Zurich with a transit halt at Dubai. We landed at Zurich International Airport at around 10 a.m (local time) on July 1st and reached Courtyard Marriott Hotel in Basel where we had a pre-booked accommodation. On the way we had lunch in an Indian restaurant and by the time we reached Marriott Hotel, Basel it was around 3.00 p.m (local time). 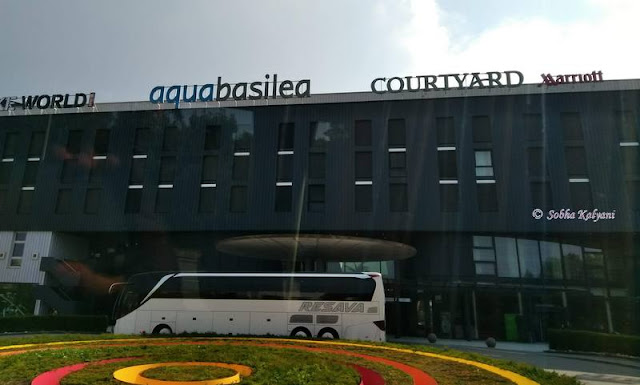 On Day 1 of tour, we visited the Cuckoo Clock Factory in Drubba in Black Forest region in Germany. From here we proceeded to Lake Titisee, a beautiful location and had lunch in an Indian restaurant in Titisee. After lunch we visited the most famous and the most beautiful place of Interlaken.

After a heavy continental-cum-Indian complimentary breakfast at Marriott, we started at around 9.30 a.m (local time). Tourists who stay in Switzerland need to compulsorily carry their passports while visiting Black Forest in Germany as the cop (police officer) check these at the time of border-crossing (Switzerland - Germany).

The ride from Basel to Drubba through the vast stretches of Black Forest was a real enjoyable one with rich greenery on either sides of the road. After a continuous 11/2 hours, we reached the Cuckoo Clock Factory which is located in a beautiful surroundings with incredible landscapes and valley views.

Black Forest is a mountain range with the largest forested area in the state of Baden-Wurttemberg in the south-western part of Germany which is bounded by Rhine Valley. Actually the 'Black Forest' is not black but is covered with dense pine and fir trees. The trees are so dense that the forest region looks almost black and hence got it's name 'Black Forest'. The forest region is famous for beautiful landscapes, charming valleys and yummy Black Forest pastries / cakes. When there is heavy snowfall in extreme winter, the black foothill / ground with snow-capped trees just look like the white cream top black pastries / cakes and thus these pastries / cakes got their name as Black Forest.

Besides the scenic beauty and cakes, the unique feature of Drubba in Black Forest is 'Cuckoo Clocks' and it's worth visiting the Clock Factory and watch a demo of traditional cuckoo clock making by the highly skilled and talented craftsmen / clock-makers of the place.

A typical cuckoo clock is pendulum-regulated and used as a decorative as well as a functional piece. As the clock strikes at every hour, the wooden doors of a small window atop opens through which a small wooden cuckoo bird emerges out with a melodiously echoing 'cu coo' call. After the number of calls corresponding to each hour is over, the bird moves in and the door closes automatically.

Cuckoo bird is a native of Europe and is a time maker since long. It also announces the onset of spring i.e. warmer weather. The traditional cuckoo clock making had begun in Black Forest region when a voyager brought along with him a Bohemian clock to this region in the 16th century CE (Current Era). The locals who remain and work indoors during harsh winters used the abundant wood available in the region, hand carved it with intricate embossing designs and made masterpiece works out it which became world famous.

There are two distinct types of Cuckoo clocks - the traditional one with elaborate hand carved nature on wood and the other is 'Chalet' style i.e. house-shaped.

After taking few clicks of the scenic beauty in the surrounding we walked into the Clock Factory. A demo on the making and working of cuckoo clocks was about to start. Many tourists gathered round the place and it was a wonderful experience to watch the demo.

After the demo we walked round the factory-cum-museum-cum-shop looking at the display of a range of wide varieties of clocks. Besides clocks there are other gift items as well like souvenirs, doll of typical German / European girl, sand-clocks and many more.

For a remembrance of our visit to the place we picked up on battery-operated cuckoo clock though its a bit expensive as it was a genuine one. We also took few other items like an ethnic wooden pen stand, a doll in typical Swiss costume and a souvenir.

After some shopping we walked out of the factory and strolled around the place enjoying and capturing the amazing beauty of nature in the cool weather. 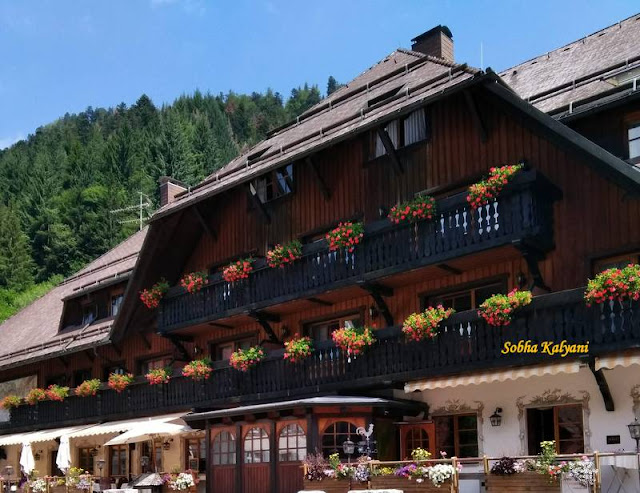 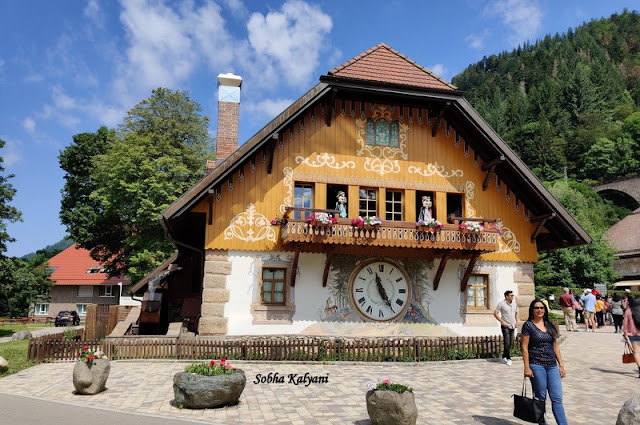 We came to know that this is clock is functional and every hour a big cuckoo emerges out with a melodious call. Though we were present at this place at 12 noon, but unfortunately we missed to watch the event. 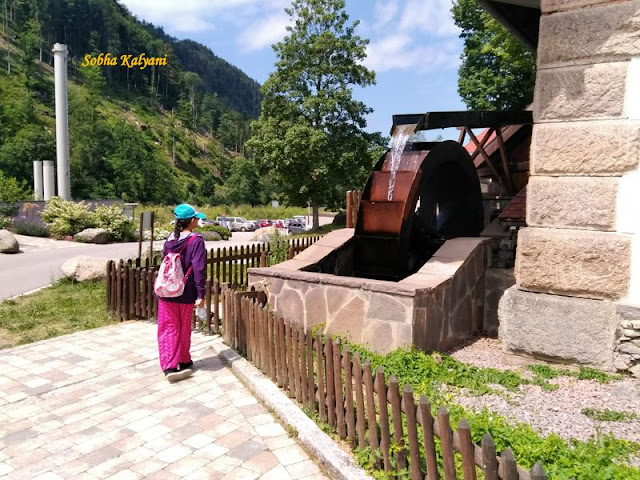 There is a water wheel which generates power for the huge clock in front. After strolling for a while we proceeded to yet another beautiful spot, Lake Titisee, in Switzerland.

Drubba Clock Factory is one of the must-visit places in Germany. The memories of our trip are still fresh in my mind.
Europe Germany Switzerland Tourist Places