Switzerland Diaries - Spending An Afternoon At Lake Titisee In Germany

- December 23, 2019
We went on a 5-day Switzerland tour and stayed in Courtyard Marriott Hotel in Basel. Our Day 1 itinerary including visit to Cuckoo Clock Factory at Drubba in the Black Forest region in Germany where we had a wonderful experience. After enjoying the beautiful landscapes at this place we headed towards Lake Titisee which is known as the 'Pearl of Black Forest'.

Switzerland is a small Federal Republic country that is composed of 26 cantons (a canton is like a state in India). It is a landlocked country and has international borderlines with the countries of Italy, France, Germany, Austria and Liechtenstein.

Switzerland is one of the most developed countries in the world with Zurich, Geneva and Basel that ranked among the top ten cities in the world in terms of quality of life. It's currency is Swiss Franc and is official known as CHF (Confoederatio Helvetica Franc).

July is peak summer in Switzerland when the weather is cool and pleasant with not more than 24-25℃. For Indians, in particular, for South Indians July is the best season to visit the country. Titisee is a small town in south Germany and is on the north shore of Lake Titisee in the Black Forest region.

Well getting back to our trip, after visiting the Cuckoo Clock Factory in Drubba, we proceeded to Titisee village and reached the place at around 2.00 p.m. We along the main road of Titisee town which was not much crowded but we could see a good number of Indian tourists moving around from one shop to the other.

There are rows of gift / souvenir shops on either side of the main road selling Cuckoo Clocks, cowbells and other Swiss souvenirs. The weather was very pleasant on the day of our visit to Titisee. We too walked around the shops and bought a couple of items, however the items are a bit expensive in terms of Indian rupees.

After some shopping we walked down the lane and reached the lake. It was amazing to see the picturesque scene of the lake located between the mountains and forests of the Black Forest region in Germany. The surroundings of the lake are so calm and quiet that it's perfect for relaxing and to spend some time in peace. This is an apt place for those who are damn tired of the hectic life and are badly in need of a break. A place far from the maddening crowd.

Also read: Many facilities like swimming, wind-surfing, sailing and pedalo hire are offered for the tourists at the lake. Tourists also enjoy a stroll at this serene place which clean and pollution free.

When we visited this lake in afternoon no water activities were taking place. I could see only few Indian tourists idyling out and taking pics, selfies and videos. We too spent some time strolling around at this calm and quiet place and then walked to the nearby Indian restaurant on the main road. 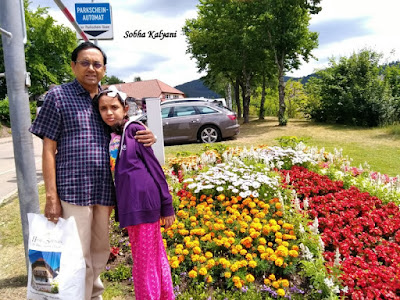 As it was summer in Titisee, there were beautiful colorful flowers in full bloom where many tourists were taking clicks. Near one of the restaurants on the roadside, there was a big statue of cone ice cream where children are posing for a photo. 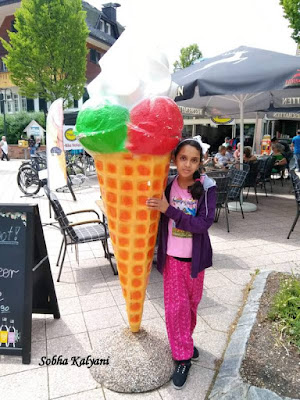 It surprised me to see an Indian restaurant in such a small European town. The restaurant was heavily crowded with Indian tourists from different states who were struggling / competing to grab the available food as it was already past 3 in the afternoon.

We just had bhel puri, veg biryani without raita as it was already consumed and the hotel people took time to put up raita and a black forest pastry. The taste of food items was good. After spending a pleasant afternoon at Lake Titisee and enjoying Indian veg food we proceeded to Interlaken - one of the most popular tourist destinations of Switzerland.
City Walk Europe Germany Switzerland Tourist Places