Parts of a plant

There are two main systems in a plant. These are:
The root system contains roots and root hairs and remains under the soil in most of the plants. While the shoot system remains erect (upright) above the soil and it has stem, leaves, flowers and fruits. 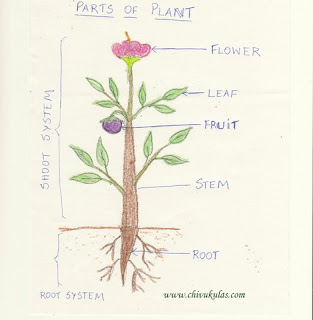 Watch the video on parts of a plant:

The part of the plant that remains under the soil in most of the plants is called the root. It helps in fixing the plant firmly into the soil and thus helps it to stand erect (upright) above the soil.

Roots absorb water and the dissolved minerals from the soil which are used for preparing food. They also store the extra food in them which is used by the plant when required.

The part of the plant that remains erect (upright) above the soil is called the stem. It supports all the other parts of the plant.

It helps in conducting (carrying) water and dissolved minerals from the roots to leaves where the food is prepared. Stems also conduct the prepared food (simple sugars) from the leaves to other parts of the plant.

These are the most important part of the plant. Most of the leaves are green in color due to the presence of the green coloring pigment called chlorophyll which is capable of capturing light energy from the sun and convert it into chemical energy in the form of food.

In most of the plants, food (carbohydrate) is prepared in the leaves through a process called photosynthesis.

After pollination and fertilization of the ovary develops into a fruit while the ovules develop into seeds. These seeds grow into new plants under favorable conditions.

The fleshy edible (eatable) part of the plant which has seeds within it is called the fruit which stores the food prepared by the plant. Seeds are embedded within the fruits and develop into new plants.

Based on the height of the plant, texture of the stem and certain other characteristics all the plants are mainly divided into three categories viz.

100 GK Questions and Answers About India

Copyrighted material. Author reserves all rights. Who is the ex-officio chairman of Rajya Sabha? Answer Who is the 1st Indian to win a...