Powerful Ganesha Mantras With Meanings For Removal of Obstacles

- August 24, 2011
Om Gam Ganapataye Namah is one of the powerful Ganesha Mantras. Salutations to Sri Ganesha.

Lord Ganesha also known as Vinayaka and Ganapati, is one of the most worshipped Hindu gods. He is believed to be the remover of obstacles and giver of knowledge and wisdom. 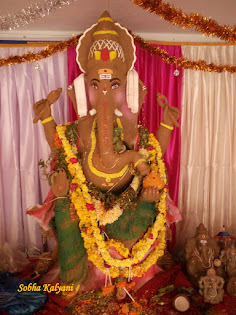 The meaning of the above sloka is:

The bright moon-like complexioned, all-pervading one, in white clad, with four arms and an ever-smiling face, I meditate upon Thee to bless me and remove all the obstacles.

This is the most important sloka recited before the beginning of any Hindu function / venture / religious ceremony. It is believed that Ganesha, aka Lord 'Vignesawara' is the remover of obstacles and evils. The word Vishnum in this sloka is not related to Lord Vishnu but it literally means the all-pervading and it implies to Lord Ganesha. In fact, no Hindu would dare to start any work without first reciting this slokam.

Also read: The birth of Ganesha

Ganesha is the elder son (according to some beliefs He is the second son) of Lord Shiva and Parvati Devi.

Lord Ganesha is the Lord of all the Ganas (i.e groups), hence he is also known as Ganadhipati / Ganapati ('adhipati' means lord). Ganesh meaning is (Gan + Esh) 'eshwar' i.e. Lord of 'Ganas.

Ganesha is believed to be the Lord of Success and He is worshiped by the devotees not only for removing obstacles but also for having good education, gaining knowledge and wisdom.

Lord Ganesha in spite of his short stature is believed to be highly knowledgeable and wise. It is He who could successfully script the great epic of Mahabharata non-stop while it was being dictated non-stop by the author / composer Sage Veda Vyasa.

Every year Hindus celebrate His birthday as on Bhadrapada Suddha Chaturthi day. Ganesha's idols are installed in the street corners. These are kept for 9 continuous days in some regions as a part of Vinayaka Navaratri celebrations. On the 11th day, these idols are taken in huge processions accompanied with dance and music and are immersed in the nearby water resources like lakes or rivers.